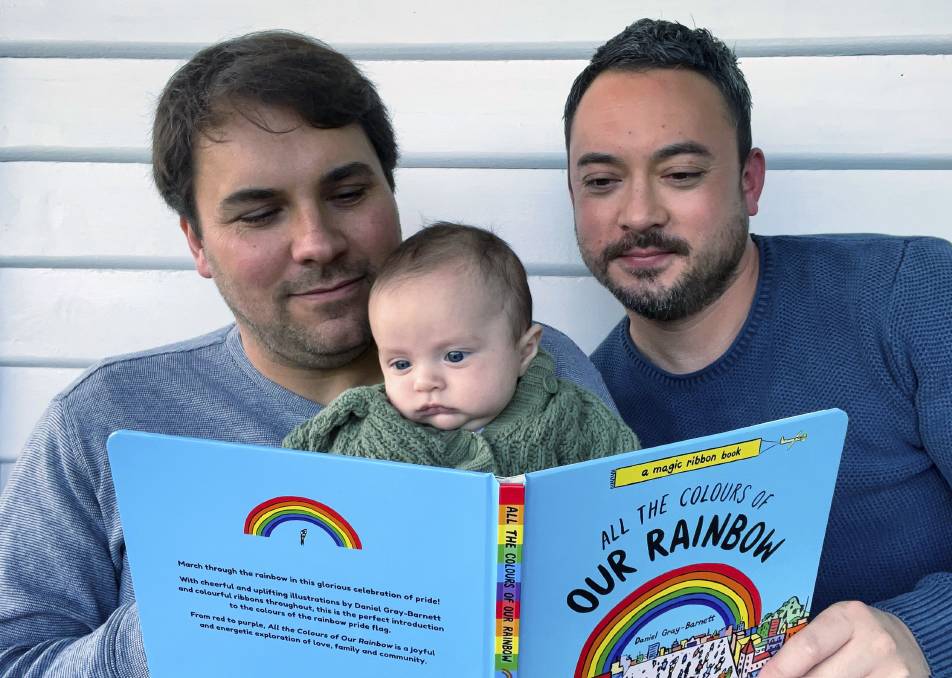 Author and illustrator Daniel Gray-Barnett has released a children's book based on the colours of the LGBTQIA+ rainbow.

A new children's book from a Tasmanian author is spreading the message of love and acceptance through words and colour.

Daniel Gray-Barnett's latest book All the Colour of Our Rainbow has been released just in time for Pride Month and aims to explore the meaning behind each of the colours of the pride flag and what they represent for the LGBTQIA+ community.

Gray-Barnett is an award-winning author and illustrator based in the Huon Valley with his partner, son, dogs and chickens.

He previously studied medical science at the University of Sydney before he followed his love of illustration to become a children's illustrator and author.

His book Grandma Z won the Children's Book Council of Australia award for Best New Illustrator. He said that with June being Pride Month the release of his book was more important than ever.

"In celebrating our rainbow communities and embracing our differences, we learn that pride is also about the values and wonderful things in life that unite us all," he said.

"Thinking about the questions my son will face at school and in broader society about having two dads, I wanted to make sure all children can learn from an early age that not every family fits into the typical mummy and daddy mould that we see in mainstream children's media."

Gray-Barnett understands the importance of acceptance and diversity after he struggled to come out due to being raised in a conservative family.

"It's aimed at a young audience. The colours already have set values of what they stand for. It was about working out what experiences and things are associated with those colours," he said.

"Red stands for life so we have a picture of a same-sex couple, based on me and my husband, welcoming a new baby which is something we and many same-sex couples are experiencing around the country.

"The rainbow is becoming more and more visible and kids are going to have questions.

"I know my son is going to have questions when he starts school about why does he have two dads, and who is his real dad?"

After a four-year engagement with his partner Daniel Barnett, the couple made history as the first same-sex couple in Sydney to lodge their intent to marry on December 9 2017, the first day the new gay marriage law was active.

Gray-Barnett and his partner now have a family of their own, with their three-month-old baby Till being one of the book's first readers.

"Even though the book doesn't discuss any big topics like that head on, it's a good introduction into talking about pride and the rainbow community and how there are people that don't fall under the traditional mum and dad family," he said.

"It's a gentle way to start the conversation.

"The earlier the better for learning about diversity and different types of love. Families come in all shapes and sizes."