SURVIVOR: Joan Collins and her husband Percy Gibson in 2019 after escaping a blaze that broke out inside their home.

Dynasty's scheming Alexis Carrington and the woman who played her, Joan Collins, aren't that far apart, judging by the British star's recent memoir, My Unapologetic Diaries.

In it she takes readers on a tour around the globe, from exclusive restaurants and star-studded parties in Los Angeles to swish parties in London and the Belaz Gallery in New York. At all these she displays a gift for knowing who to cross the room to cultivate and who to flip off as a waste of time.

Revelling in her bitchiness, she describes one party as "a complete crush of hags, facelifts and ancient old men in flashy suits". Bad plastic surgery is "almost a moral failing". Boris Johnson looks like he "used to brush his hair with an egg beater". 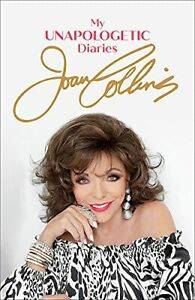 Collins, 88, is nothing if not hard-working. Every event seems parts of a ceaseless striving to keep her profile and career alive in an industry where many female stars seem to have abducted by aliens after the age of 40.

Against this, the author of 17 books directs some of her greatest scorn at publishers and the publicity trail.

She tells how after "working her ass off" in Melbourne, including a show with Ernie Sigley, she did a signing at Myer.

Hundreds attended but TV reports showed only a dozen or so stragglers at the end. They then did an item on Priscilla Presley, who was launching a perfume, and said her crowd was much bigger.

Collins bitterly complained to the media, which she claimed said "I acted like a stuck up bitch... What am I doing this for?... It is really a drag".

This is an intermittently entertaining book that is probably best dipped into than read end to end. The endless roll-call of places and name can become tedious. But there are some absolute gems within.