It took effort, but a grandfather and grandson brought a barn find MGB GT back to showroom condition. 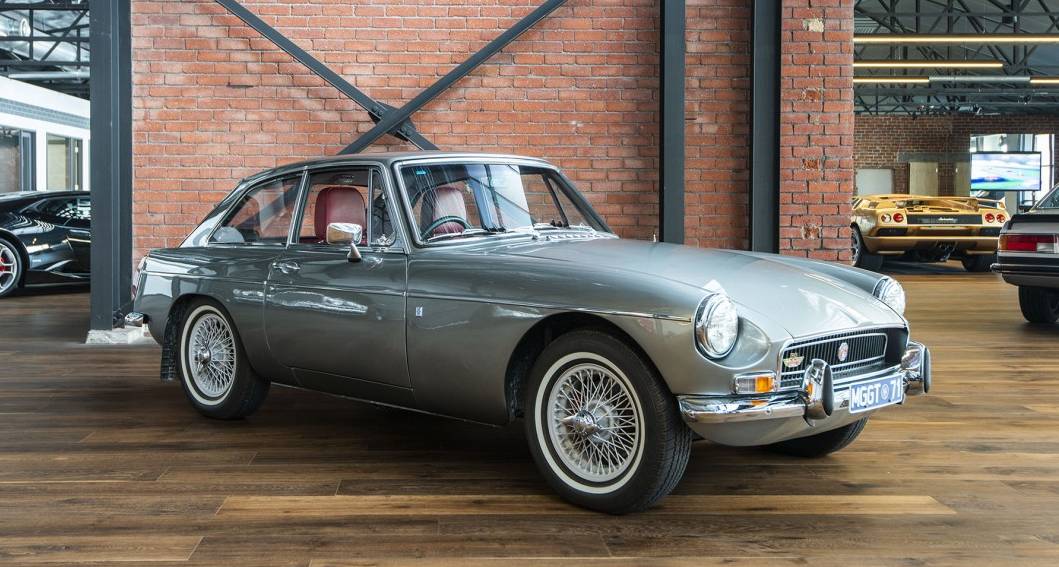 "Have patience. If it doesn't work, go have a cup of tea and come back; you always get it a second time around."

That was a quote - and a lesson - McLaren Vale Vintage and Classic chairman Trevor Sharp passed onto his grandson while they worked on their first project car together.

Mr Sharp, of McLaren Vale, recruited his grandson Robbie Jones, 20, of Tatachilla, to help restore a 1971 MGB GT - the fifth vehicle of that marque Trevor has owned.

"Pa and I were always fiddling around with cars before this car," Robbie said.

"I needed a project and I thought it'd be good for him to help me," Trevor said.

Robbie was 14 when the project started. The car was a barn find at Port Elliot - it was blue with a red bonnet and while complete, it had a lot of rust. Put on the back of a trailer, the car was restored in a shed of Trevor's son and Robbie's uncle, Chris Sharp, Willunga, over three years. 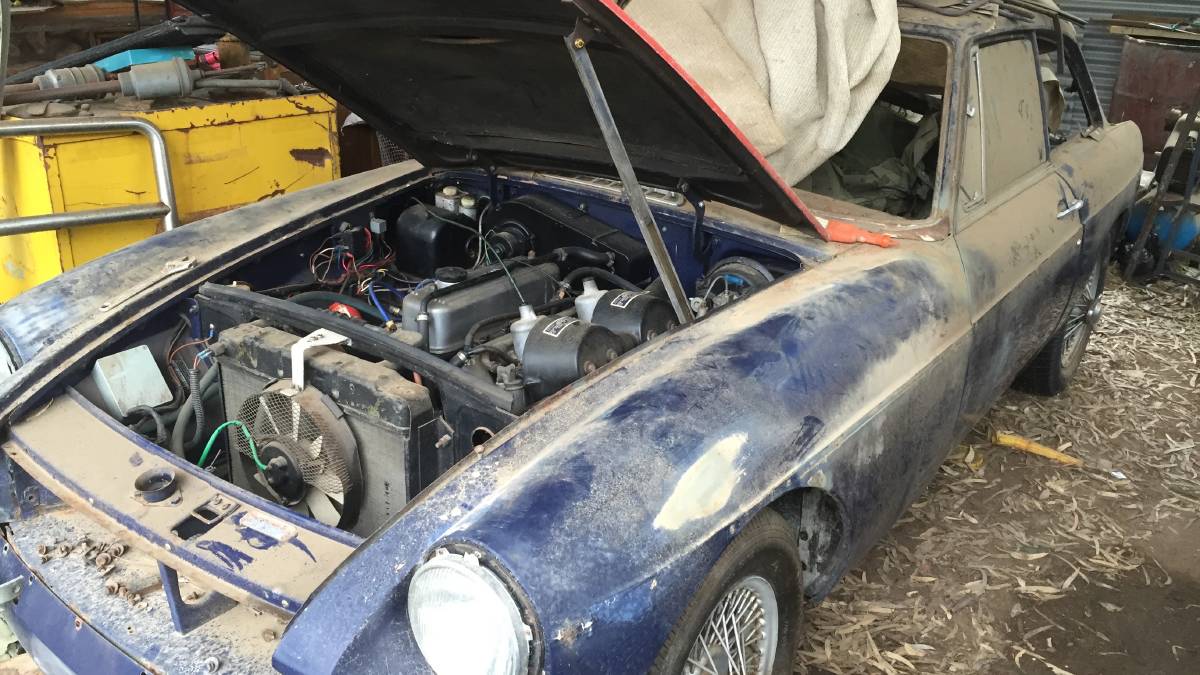 The MGB GT as it was found in a barn at Port Elliot. Photo supplied.

Robbie's primary job was to photograph and document the parts and assemblies as they as they pulled them apart for restoration and had a reference for putting them back together. Together, Trevor and Robbie repaired all the rust in the body, sanded and primed the car, refurbished the original suspension, brakes, transmission and engine, and replaced all the rubbers and consumables. Professionals were hired to put the final coat of paint on and complete the reupholstery of the interior.

The project was a labour of love and getting the body right, particularly for the topcoat of paint, took great effort.

"I remember the dust; there was lots of sanding," Robbie said.

However, once the car was finally on the road, the men were pleased with their results.

"It was really nice to look at," Robbie said.

"Everyone at the MG Car Club of SA was shocked at how it turned out," Trevor said.

After about two years, the car was sold through classic and prestige car dealer Richmonds, Adelaide, and Trevor received $33,000 for it.

Some of the biggest lessons Robbie learned from the experience were that things take time to complete and correct processes need to be followed, otherwise parts won't fit together or the finish won't be as nice. He also learned Trevor's catchphrase about making a tea to reflect on a problem to help find a resolution.

"When you stop for a minute, you can think about it and then you get an idea of how to fix it," Trevor said.

Overall, the experience rubbed off on Robbie - he later started an apprenticeship as an auto mechanic through MTA at Southern Vales Mechanical at McLaren Vale. He started the fourth year of the apprenticeship in December 2021.

"I always loved cars and I grew up around them," he said.

He has also developed a habit of developing his own projects. His first in his own right was a Holden Commodore VH he bought for $50 - yes, the value of a bank note - from a neighbour. The car has a 173 cu in/2.85L six-cylinder engine and a 5-speed manual - a rare combination. He then bought another model, but with a 202 cu in/3.3L six cylinder and three speed automatic transmission.

"My original idea was to put the manual into the automatic car, but I swapped the interiors between the cars and sold both of them instead," he said.

He has since resprayed a six-cylinder Holden Ute VY and worked on a 2006 model Subaru Impreza. His current project and daily driver is a 1984 Toyota LandCruiser 60 series, which he has owned for more than two years.

"It's still intact and I drive it around as it is, and I'm about to pull it down, redo it again and go travelling," he said. 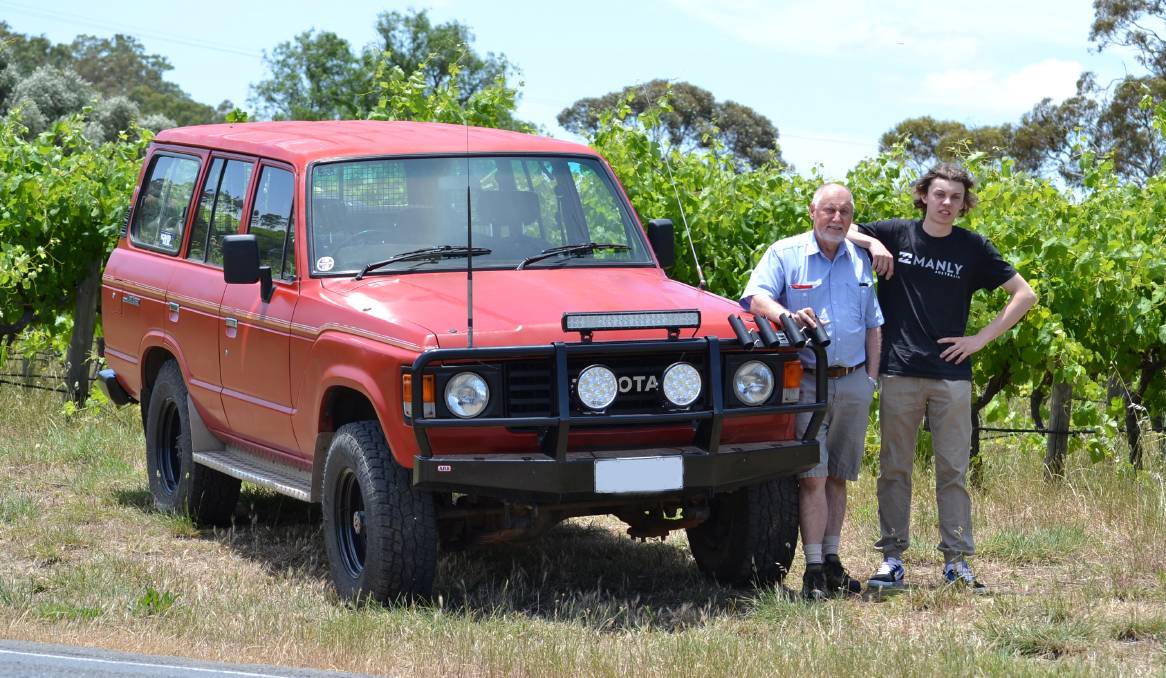 The MGB GT, built from 1965-1980, was based on the MGB roadster and had a fixed roof, a rear door like a hatchback, and a small rear bench seat that made it a 2+2. All GT models sold in Australia were imported from England - unlike the soft top model, which for some time was assembled in Australia from a knock-down kit.

This vehicle was a 1971 build, had a synchromesh four-speed manual gearbox and a 1.8L inline four-cylinder engine. Trevor found the car not running but complete with its original engine, transmission, and differential, in a Port Elliot barn and bought it in 2014. Trevor had previously owned two MGB roadsters at this point, one of which he still has now. 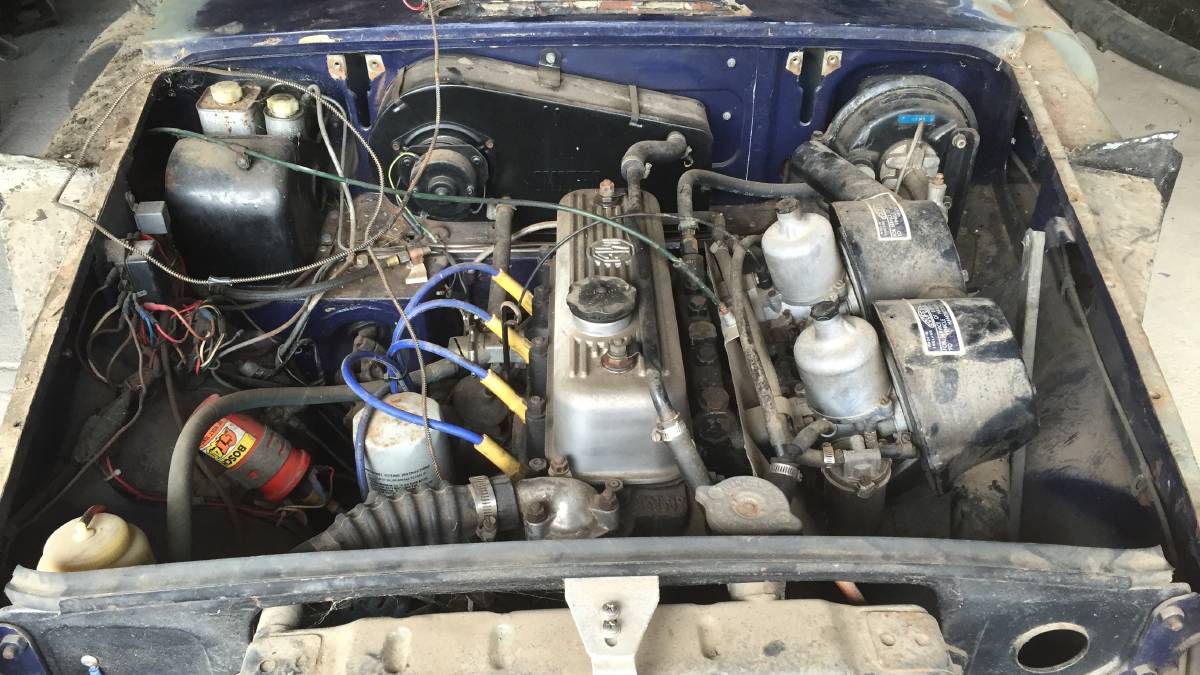 The MGB GT as it was found in a barn at Port Elliot. Photo supplied.

As a complete car, the men didn't have to stress as much about finding enough parts to bring the car to concours condition.

"We fired it up before we pulled it apart; it didn't blow any smoke," Trevor said.

"We just stripped the car and cleaned it."

Robbie was in charge of the camera - he took photos of every assembly before it was disassembled, so they knew how things looked and how to put them back together again.

"We labelled everything before we took it out," Robbie said.

Trevor bought a rotisserie for $900 to help roll the body, which made it easier to move around and work on different areas.

All replacement parts for the car were sourced from Sussex, UK; Trevor had found a small parts dealer Sussex Classic MG Car Parts, Greg and Hazel Day, and conversed regularly by email to get what was needed, such as rubbers for door frames and wiring looms for the electrical system.

"He was really good; he packaged parts and delivery in a way so freight was most economical, which I didn't know about," Trevor said.

The original engine - which according to the odometer, had done 52,000 miles - and gearbox were used.

"We took the sump off as there was slick in the bottom of it, so we cleaned it out."

There was a fair amount of rust in parts of the car, particularly around the sills and windows. They cut the rust out with grinders, rewelded the sills and replaced one on the passenger side, spot welded and riveted in two new floors in the driver and passenger footwells and had a custom aluminium panel made for where the hinges of the back hatch mounted to the roof. 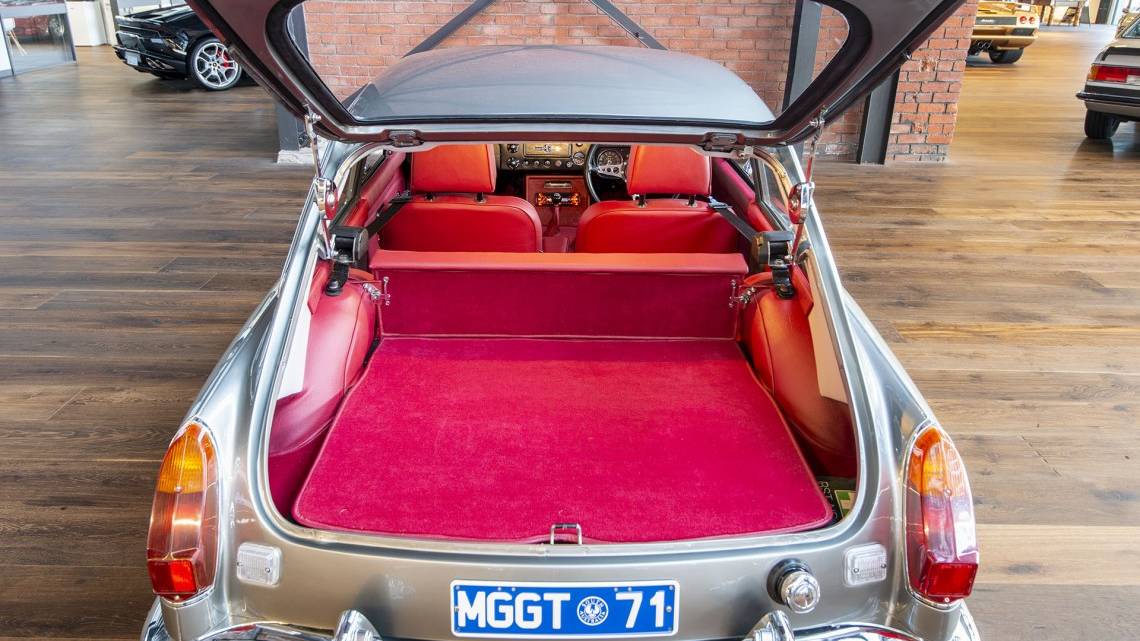 The rear of the car with the hatch open. Photo credit: Richmonds

The body was blasted back to bare metal, with the assistance of Nigel Williamson from Mustangs & Australian Classics in McLaren Vale, which then made clear where there were other rust spots to be fixed.

Trevor was quoted $30,000 for the car to be primed and painted, so he opted to do the preparation himself.

"We were using all different grits of sandpaper, some of it so fine it was like rubbing a piece of paper against the car," Trevor said. 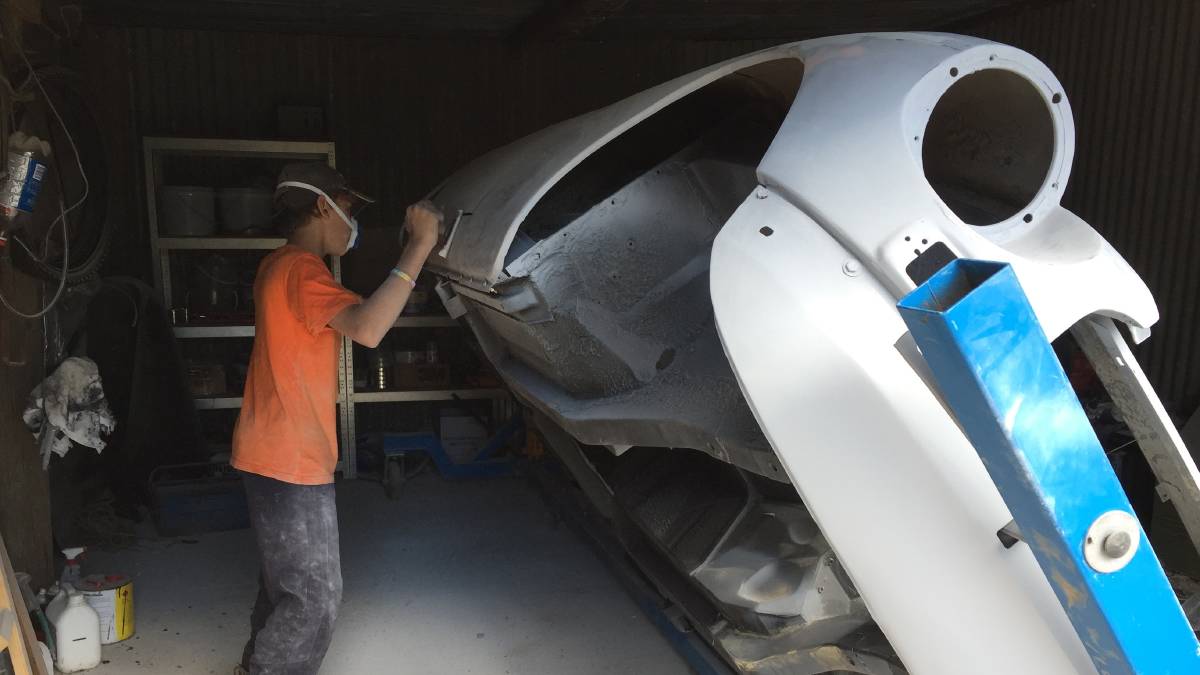 Robbie Jones sands back primer on the car. Photo supplied

But without intense lighting to inspect their efforts, the person contracted to finish the paintwork, Adam Van Der Linden from Southern Classics and Customs at Seaford, advised the undercoat needed more work and asked them to re-sand and re-prime. This happened about eight times, including once after one coat of topcoat was applied, only for the lights to highlight a scratch from the sandpaper, resulting in the whole car being rubbed back to a smooth finish.

"Once we thought it was right, he was still unhappy," Trevor said.

Once they got the point to a standard they were all happy with, the car was painted a custom colour that gunmetal grey with a hint of green - truly a one-off colour.

Underneath, the original differential and leaf springs were cleaned and recoated. Even the fuel take was retained; Trevor got a two-pack enamel from Lonsdale Paints to help re-seal it, effectively coating any rust spots that may have still been inside and extended its life.

They sprayed bitumen under the car with a splatter gun and applied a two pack over the top to make the undercarriage look glossy and easy to wash off.

The front brake calipers and rear drums were painted red and the glass was all original, except for the front windshield.

The dashboard was surfaced with crinkle black spray; there were a couple of holes in the dashboard from some aftermarket switches that were installed, but the men plugged the holes up. New rubber seals were installed behind the chrome-ringed instruments, which were also original.

The seats were covered in a leather-look vinyl, and a centre console - sourced from a later model - was colour-matched to the seats and trim. 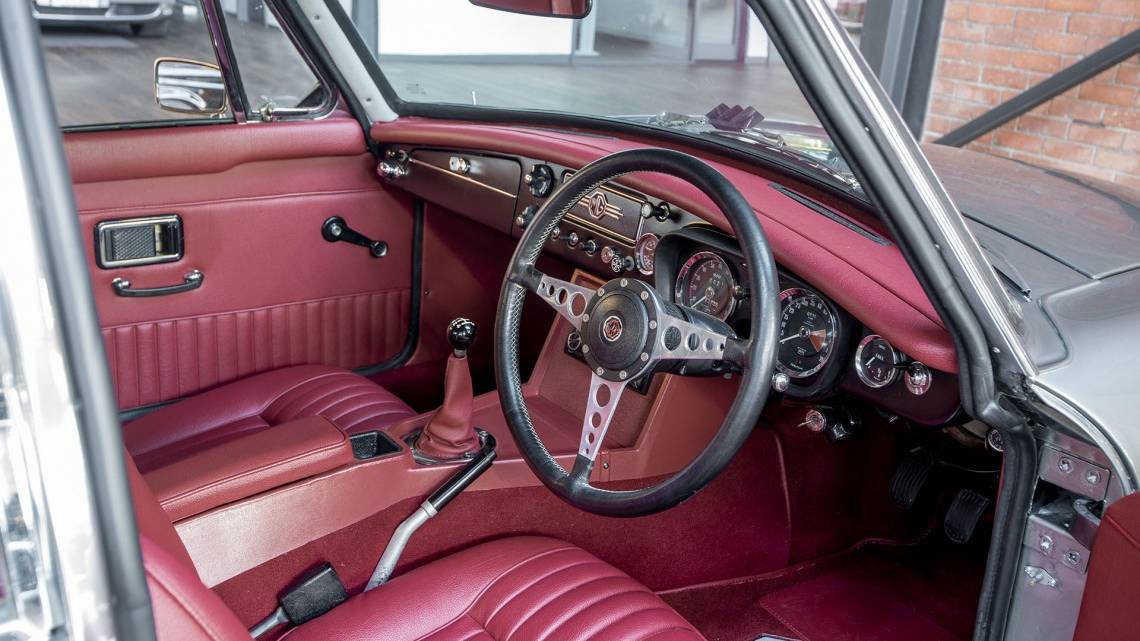 The original wheels were sandblasted and powder coated silver grey and were wrapped with white-walled tyres.

The original bumper bars were re-chromed, while new overriders were sourced.

A chrome strip that ran along the trailing edge of the bumper bar proved elusive. Some had suggested auto wreckers to see if it could be found, but that was fruitless as they were usually among the first things damaged in a front-end crash. Finally, a piece was sourced from Sydney from an MG parts source.

Firing it up for the first time was a laugh.

"I remember starting it with a coke bottle filled with fuel and a pipe that went straight into the carbies; it was an intravenous drip," Trevor said.

But jokes aside, they were proud of their efforts and the car won lots of admirers.

"It was really nice to look at," Robbie said.

"Everyone at the MG Car Club of SA was shocked at how it turned out," Trevor said.

The car made a few public appearances, including at a British Classics Tour at Victor Harbor.

Despite sharing underpinnings with its canvas-topped twin, the driving experience left Trevor hanging for more character.

"It drove like any other English four cylinder. Because you were enclosed, it didn't feel like an MG. It wasn't as good to drive as the tourer," he said.

"The dynamics were different."

Alas, a decision was made to sell it. Although Trevor received $33,000 from the sale at Richmonds, Trevor said the money still didn't repay the time and effort put into the three-year project. But the project was a great bonding exercise for Robbie and his Pa.

However, the car was a good lesson for a project that followed - Trevor bought another GT from a friend and with the wisdom of the car he restored with his grandson, it was much easier to correct some of the wrongs and bring it back to original condition.