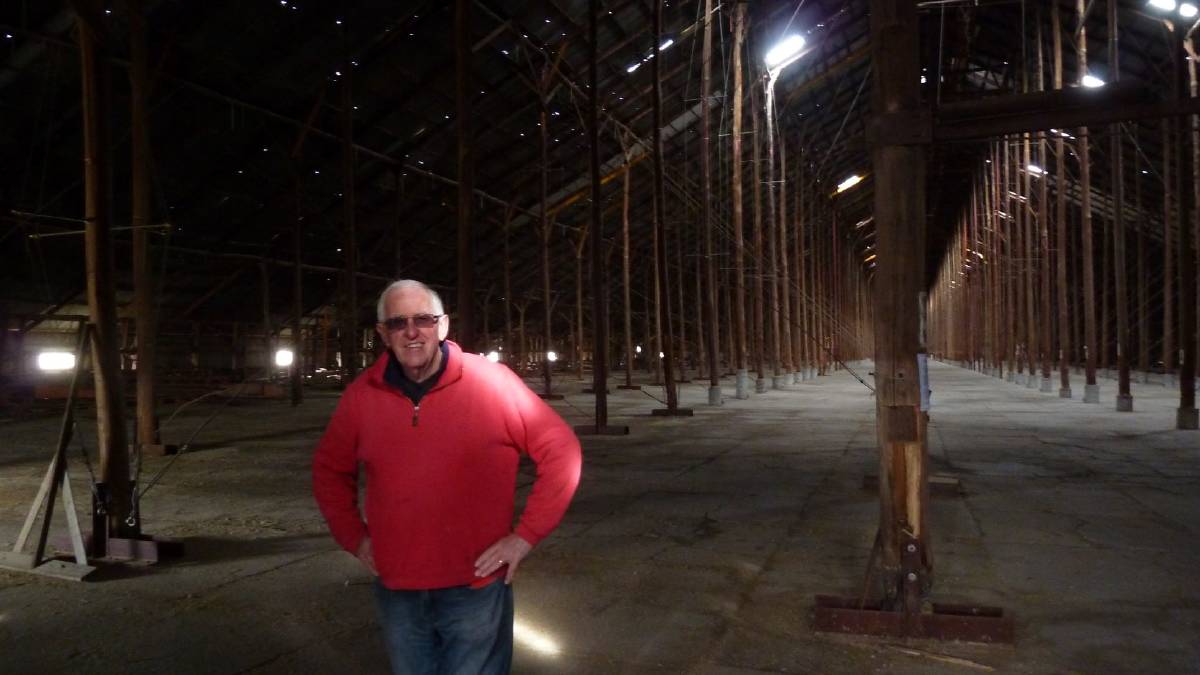 David Grigg in the gloom of the Stick Shed. To him and his mates the place was a great playground when they were kids. Photo Mike Rosel.

Victorian town Murtoa is home to a bustling tourist attraction - made of 'sticks'!

The generations of Wimmera wheat growers who knew it as Murtoa No 1 Grain Store filled it with 92,000 tonnes of FAQ (fair average quality) wheat.

Today the Stick Shed is a major tourist attraction, so popular that opening hours have been extended (10am-2pm daily); even in midwinter it regularly attracts up to 100 visitors daily.

As you approach this resurrected 1.7-hectare icon of the wheat industry, it's hard to appreciate that it is longer than the MCG. But enter the door, and a startling panorama awaits - a forest of 560 mountain ash poles disappearing into the gloom.

The "sticks" recall the pillars of a Gothic cathedral, or the stonework of a medieval water cistern: hence its description as "The Cathedral of the Wimmera". A cereal cathedral, perhaps.

Some sticks! Erected in 1941-42 in only four months as a wartime emergency measure to store wheat which could not be exported to traditional markets in Europe, they represent a triumph of vernacular architecture. They support 2.2 hectares of corrugated iron roofing: some 220 tonnes, fixed with around 200,000 nails.

Secretary of the Stick Shed Committee of Management David Grigg, 77, and his mate Leigh Hammerton, are the Murtoa locals best placed to recount the almost 30-year conservation saga of how this giant storage narrowly dodged the fate of its even larger sister shed, turned into metal scrap and firewood in 1975. They are the senior survivors of the crusaders who fought hard, with National Trust support, to persuade the local community and the grain trade that the deteriorating Stick Shed could bring economic benefits as a mighty memorial celebrating the grain industry.

David - for much of his working life involved in running racecourse totalisators in western Victoria - must have thought the odds of saving the Stick Shed were long indeed, notwithstanding that it was placed on the Victorian Heritage Register in 1990.

"It was born in war - to store much of our wheat crop - and we certainly had an even longer war to protect and eventually restore it," he recalls. "It's the last survivor of 23 similar sheds built across Australia from the late 1930s to hold the ubiquitous FAQ wheat. Decades later they became surplus with diversification of wheat species: today there are more than 50 species available, usually stored under polypropylene tarpaulins in ground level bunkers."

The conservation challenge was to persuade the wheat industry, local community and media that the Stick Shed was still worth its central place in the middle of Australia's largest inland grain receival centre.

It has a good tourism location. Murtoa (300km from Melbourne) is not far from the main Melbourne-Adelaide highway, near the southern end of the increasingly popular Silo Art Trail. After the last wheat was railed away in 1990, its deterioration continued as it was left to mice and pigeons. 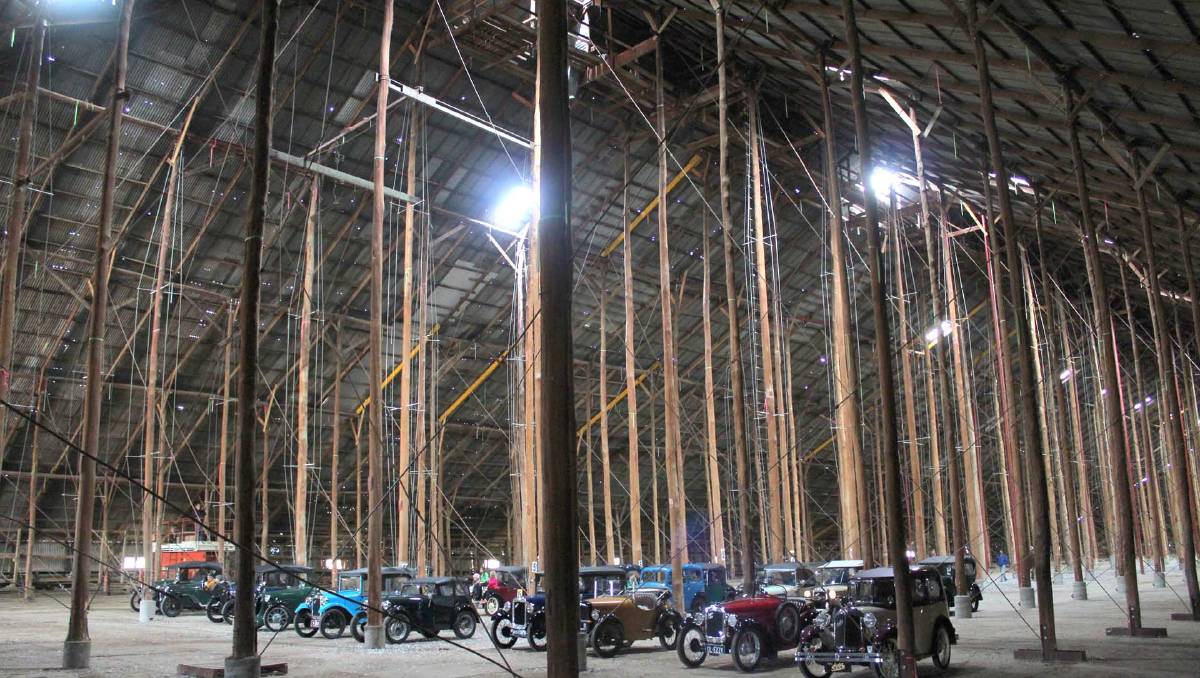 The Stick Shed is often used for functions such as this event where it played host to vintage vehicles. Photo courtesy The Stick Shed.

To David and his schoolmates, who knew the giant storages as "The Bins", it served as an occasional playground 265 metres long, 60 metres wide, and almost 20 metres high at its apex.

"We'd nick across the railway lines, under the wheat trucks and climb up to the catwalk under the roof, then jump into the yielding wheat," he said.

"We'd slide down the side of the stack, and repeat the game. The local footballers would sometimes train by running up the stacks with effort - it must have been like those athletes who once trained on the Portsea sand dunes."

While bulk transport and storage had almost replaced the legendary hard men of the industry - the wheat lumpers who lifted jute sacks carrying three bushels, around 80kg - the shed was still hard yakka for those working there.

Bob Petschel laboured there on and off for 47 years, starting in 1960 as a topman, maintaining the conveyors which transferred the wheat.

He laughs: "A Work Cover bloke would have a fit if he'd seen those early conditions. We'd adjust the wheat conveyors as needed, both to cope with the slight movement of the building under different pressures of wheat and roof expansion, and place the deflectors which directed the wheat into the stack.

"We moved around and across unprotected conveyors, pulleys and belts and other machinery. Some poles would bend under various loads.

"It was sometimes stinking hot. We took a thermometer up one day, it hit 63 degrees. In the early days, when we were outloading wheat, the roar of six diesels (minus mufflers) and clouds of wheat dust made it miserable. No place for an asthmatic. Eventually, masks were available.

"Some of the workers had to clamber over the wheat carrying backpacks to spray any weevil infestations. They'd sink in up to half a metre.

"Mice were not so much a problem, barring a plague every decade or so. I had a .22 rifle loaded with small shot to keep the rats down.

"Wheat dust was potentially explosive; there had been incidents in other sheds, and we had a minor fire in the machinery tower. There were occasional electrostatic shocks from the machinery. The blokes would smoke in the shed, and in winter we had a fire in a metal drum.

"And while we had powered scoops to clean up the base of stacks, shovels were needed to tidy up." 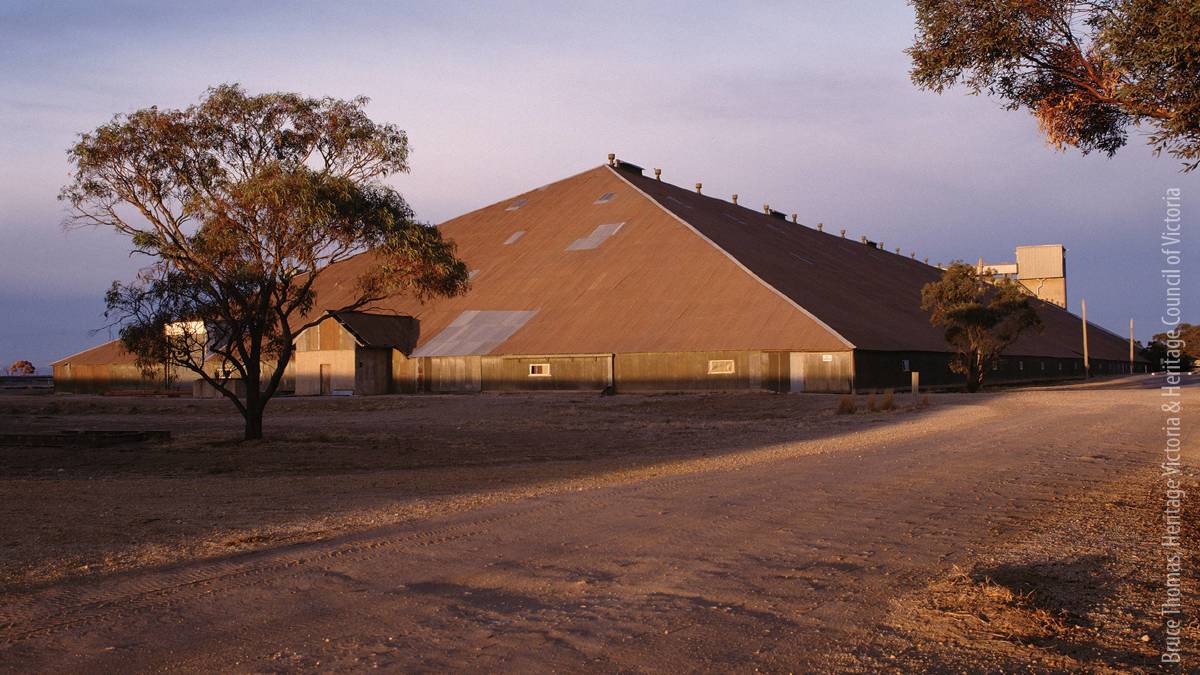 The weather provided some drama.

"Thunderstorms were noisy... and if it was quiet, and the weather was hot, I could 'hear' a cloud passing over, causing creaking from uneven heating and cooling of the roof iron."

The shed, at 1465 Wimmera Highway, Murtoa, was added to the Australian Heritage List in 2014. More than $2.5 million has been spent to conserve it and today it attracts local, State and Federal heritage and tourism grants.