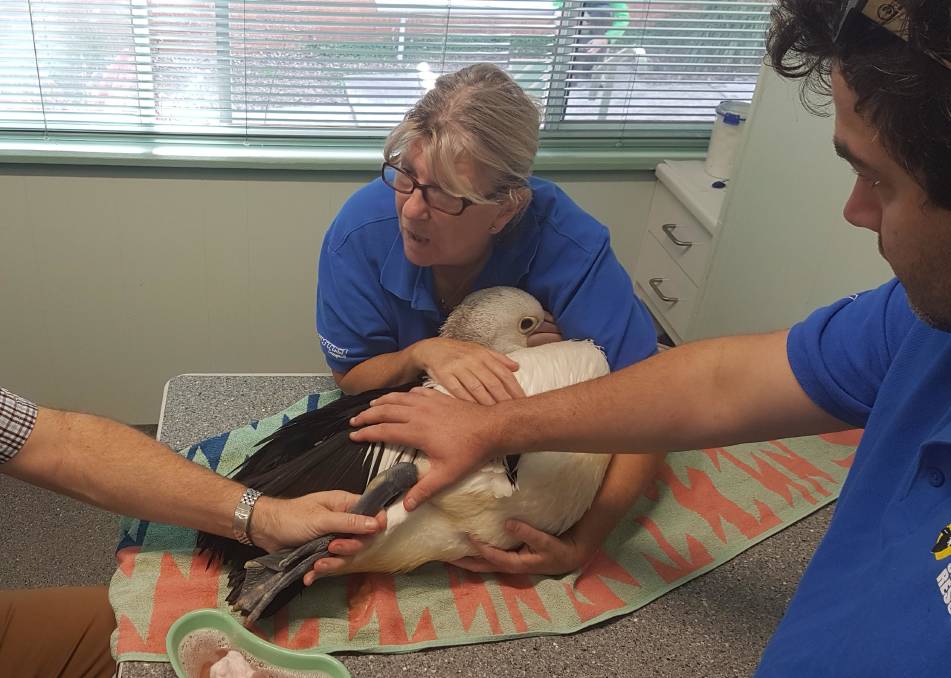 UNFLAPPABLE: Cathy Gilmore has a passion for helping sick and injured pelicans.

When pelicans are in a flap, Cath Gilmore makes sure they are not grounded for long.

She's the wildlife warrior who makes pelican wrangling look like a casual dip in the ocean.

The Gilmore girl or pelican lady, as Cathy Gilmore is known, wrangles sick and injured pelicans and other coastal wildlife not only to save them but to educate the public to keep these beautiful creatures free from harm such as fishing hooks, lines and sinkers and plastic.

A life-long animal lover, Cathy moved from Sydney to the Central Coast 30 years ago and started volunteering with Wildlife ARC. During that time, she learnt how to catch birds, particularly pelicans tangled in fishing line or pierced with fishing hooks mainly around the seaside town of The Entrance.

When she started working for WIRES, she kept in contact with the trainer Lance Ferris, later the founder of Australian Seabird Rescue, and continued her passion. Australian Seabird Rescue is a grassroots community group with a passion for coastal wildlife rescue, conservation and education.

But before setting up ASRCC, she became the first pelican feed coordinator at The Entrance where the daily pelican feed is one of the Central Coast's most popular attractions.

It started in 1979 when staff at Clifford's Fish and Chip Shop fed scraps to the pelicans every day. Jimbo's Seafood then took over the feeding and it became a tradition with the feathered friends waiting in the wings for a feed for ages before the 3.30pm feed, often getting into a flap to get top billing for food. 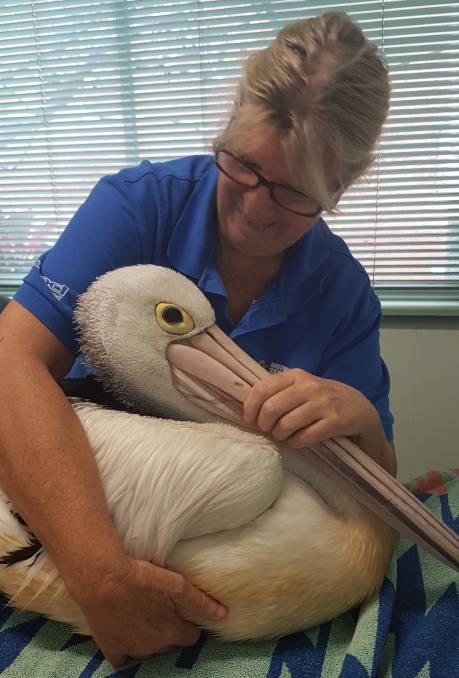 TOP BILLING: Cathy Gilmore wrangles a pelican at The Entrance.

"It started with Clifford's and Peter Mauger who would take the fish frames over to the waterfront during his break," Cathy said. "If the shop got too busy, the pelicans would waddle over to find out where he was, demanding their feed right in front of paying customers.

"But we noticed there were injuries and it was a chance for us to do something. We had a boat but it also needed someone to dive in every now and then. That someone was me."

In 1996, a feeding platform was developed to feed the pelicans fresh fish 365 days of the year rain, hail or shine.

One of the main objectives of the pelican feed is to keep an eye on the pelican's medical conditions as many have hooks and lines tangles up in their gullets, wings and other parts of their body. The feed is a chance for the coordinator to assess their well-being. 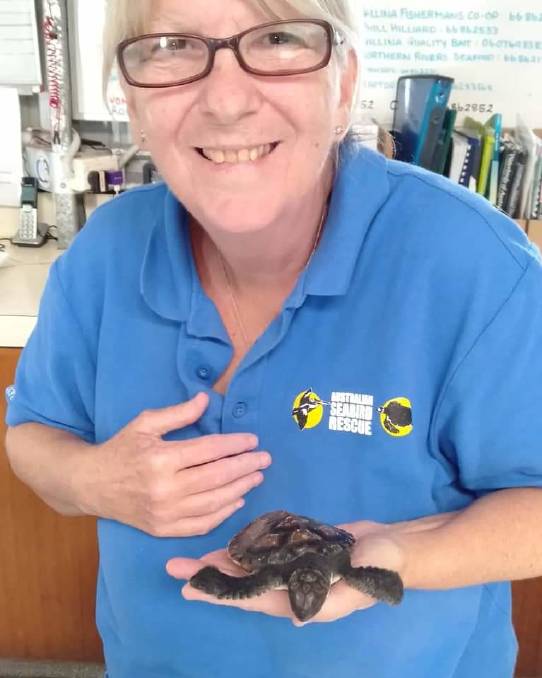 At least one or two birds a week are removed from the water and sometimes the outcome is bad but most times its just a simple extraction of a hook and they are on their way.

"I used to drive Mum and Dad crazy with the animals I brought home as a kid," she said. "We came to the Central Coast on holidays and my parents would bring us to The Entrance to see the pelicans.

"I don't know what it is about pelicans but I love them. How can you not be in awe of them? You look in up the air and they look like a prehistoric pterodactyl with that huge wing span.

"They are stunning, gorgeous birds that get horrific injuries and barely anyone helps them. If they were beautiful labradors, there would be an outcry. 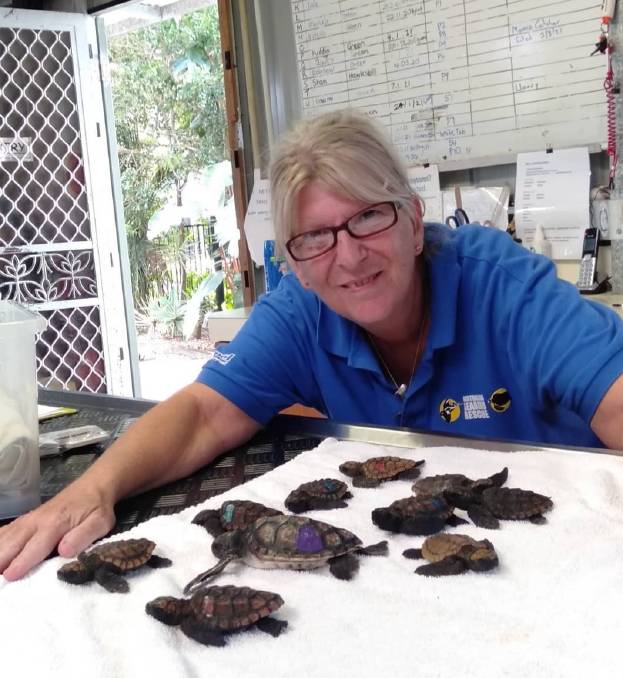 +10
Cathy Gilmore is the pelican lady of The Entrance on the NSW Central Coast.

"But you see pelicans swimming around and they do not look like there might be something wrong. They might have fishing line wrapped around them or a hook in their pouch."

But how do you catch a pelican when they are so big and look so heavy?

"They're big, yes," Cathy said. "But they only weigh about 8kg. Their body is all air sacs so they are not heavy at all. You just need to tempt them with fish, generally mullet, and then grab them.

"It's no good having just one person who can catch them. More and more pelicans are getting tangled and we need more to catch them. I'm teaching people that it's nothing to be scared of.

"We also get our bot pelicans - those with botulism. And how times have changed. When I first started, bot pelicans would have been euthanised because we didn't know then that it can be flushed out.

"Sometimes, though, we can't help and that breaks my heart. But you know that we did everything we could to save them."

Cathy and her team have rescued and rehabilitated many marine animals including green turtles, a few pelicans, penguins, hatching turtle eggs and sea snakes.

"In the early days, I did everything, including coordinating rescue, rehabilitation and release activities, workshops and fundraising," she said.

"I've even involved my two children and two grandchildren. My children often used to joke that I spent more time with the wildlife than them. Not much has changed in 30 years, but we have grown to a team of 30 in that time."

Cathy was the recipient of the 2020 Environment Award at the Central Coast Australia Day Awards, recognising her passion and contribution to educating the community on how to rescue, rehabilitate and release endangered marine animals.

Cathy and her team have rescued two green turtles in the last few weeks. One excreted a balloon, 2.4m of streamer string and a plastic bag. The other excreted a fishing hook and 40cm of fishing line.

In that time, she has also wrangled numerous pelicans entangled in fishing lines or suffering botulism. Some were euthanised but others recuperate in Cathy's bathtub before being moved to a special aviary in her backyard and then released.

One little cutie, Yana, a juvenile pelican, was injured flying over the M1 and found her way to Cathy's home before release a few weeks later at The Entrance.

"She was so little that she think's I'm mum," Cathy said. "If I go down to The Entrance, Yana sees me and gets so excited. I get excited too."

For many years Cathy has fought the installation of shark nets along NSW beaches, urging the NSW Government to replace the nets with eco-friendly shark barriers.

"The shark net kills anything that comes into contact with it and the barrier I'm trying to get installed lets the smaller fish swim through and the larger animals bounce off."

Cathy's next steps are to take on the government to change laws around releasing balloons and banning single use plastics.

"I will do that and I will get rid of shark nets before I die," she said.