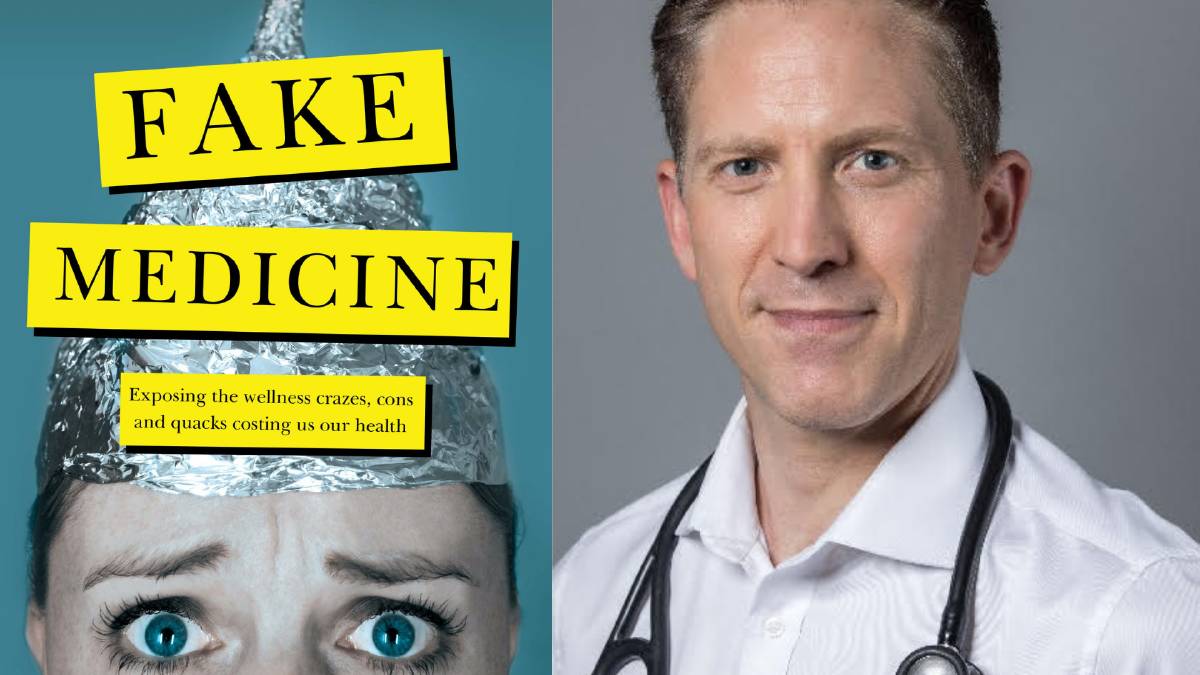 Australian GP and science communicator Brad McKay had a problem being on the wrong end of a diagnosis well before he became a doctor.

As a teenager, the author of the scorching new book Fake Medicine suffered almost unendurable pain from a rare but benign bone tumour called an osteoblastoma.

It was only removed after he had been misdiagnosed by his GP and "unknowingly tortured" by a physiotherapist and osteopath.

He said the experience taught him a valuable lesson. He writes: "I ... saw just how easy it was - when faced with an overwhelming diagnosis, a painful treatment or confusing medical advice - to be lured towards alternative therapies that might sound more promising, more optimistic and less painful."

In Fake Medicine, McKay carefully and clinically takes aim at "wellness crazes, cons and quacks" he says are costing us our health.

Social media has a special place in his polemic. He points to "Dr Google", "everybody's favourite physician" and notably refers to a study that finds symptom-checking websites gave correct information only a third of the time. Woe betide any health profession who was so sloppy.

Yet still some of his patients remain resolute that Google is more accurate that a doctor. But as he says, quoting a friend, when our car is playing up, do we go looking for an alternative mechanic?

While acknowledging that access to health information is useful way to exercise a degree of autonomy over our health, McKay cautions that interpretation is everything and a degree of scepticism is paramount. In the face of fictions, myths and lies, he stresses we need an informed health professional to help us sort it out.

McKay takes no prisoners in Fake Medicine, calling out people like Belle Gibson, founder of internet application The Whole Pantry, who was convicted and fined after falsely claiming she had overcome brain cancer through diet and "cures" such as enemas made of coffee. She had no such disease.

McKay is through in his denunciation of many popular "natural" health foods and products. The list is long: garlic, cranberries, ginger, fish oil, turmeric and probiotics are just some of them.

He also holds traditional Chinese medicine in low esteem, citing a university test of 26 herbal products obtained from the Adelaide markets. Of these, half contained heavy metals such as lead and some included synthetic drugs made in a lab.

The benefits of acupuncture, too, are unsupported by evidence, McKay writes, stating that comprehensive studies have found it to be a placebo at best and hazardous at worst.

In a chapter titled "Quacks", he also takes to Western practices to task, arguing that such are naturopathy, homeopathy, iridology, reflexology and spinal manipulation are also taken to task in the book.

Vitamins also come under scrutiny, with McKay writing that in the vast majority of cases their consumption is driven not by scientific evidence or necessity but by clever marketing.

McKay is comprehensive in his scope, blasting fad diets, detoxes and cleanses, and those opposed to fluoride, sunscreen, dairy food and more. He worries about the effect of covid-19 conspiracy theories.

He calls for people to be part of the solution, saying that if in doubt, go to the original source and check the bona fides of its author. He does this himself in the book, carefully attributing and footnoting all of the studies he cites.

While his criticisms will doubtless upset many who trust in the things he opposes, McKay stresses the need for compassion, especially when engaging with someone whose false ideas have been imprinted on them from online sources.

As he says: "It's important to remember that someone will always be wrong on the internet so choose your battles wisely. When you do decide to lay down the gauntlet... keep in mind the goal is to make friends and win converts, not to destroy them. Be kind."