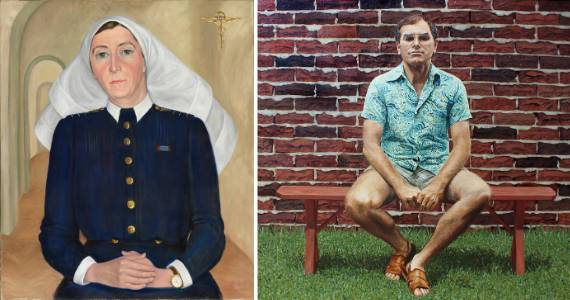 Curator's quest to chart the changing faces of the Archibald Prize.

FROM an Aboriginal tracker and ground-breaking female paediatrician to a silent movie star and World War II nurse.

These are some of the celebrated Australian figures from all walks of life, from famous faces to local heroes, who have been painted into history over 100 years of the Archibald Prize.

But what of the stories behind these faces and the people who captured them on canvas? This is the subject of a new major exhibition, and three-part ABC documentary starring art lover and actress Rachel Griffiths.

Established in 1921 there have been more than 6000 works shown in the Archibald - considered the most sought-after accolade in Australian art today.

But until recently thousands of the paintings were unaccounted for - in public and private collections across Australia and around the world or possibly destroyed .

Last year Art Gallery of NSW curator of Australian and Pacific art, Natalie Wilson, turned detective, and launched a national appeal in a quest to unearth these 'missing' portraits in the lead up to the Archibald Prize's centenary year. The ABC camera crews followed Wilson on her treasure-finding mission.

Her investigations turned up some exciting surprises.

"We wrote to institutions across Australia and internationally and we certainly found some works in unexpected locations," said Wilson.

Some of these paintings will now feature in a new major exhibition, Archie 100: A Century of the Archibald Prize, which celebrates 10 decades of the prize and has also unearthed the stories behind more than 100 selected artworks.

Wilson said while they have found images of around half of the paintings, there are still more than 3500 Archibald portraits whose location is currently unknown. 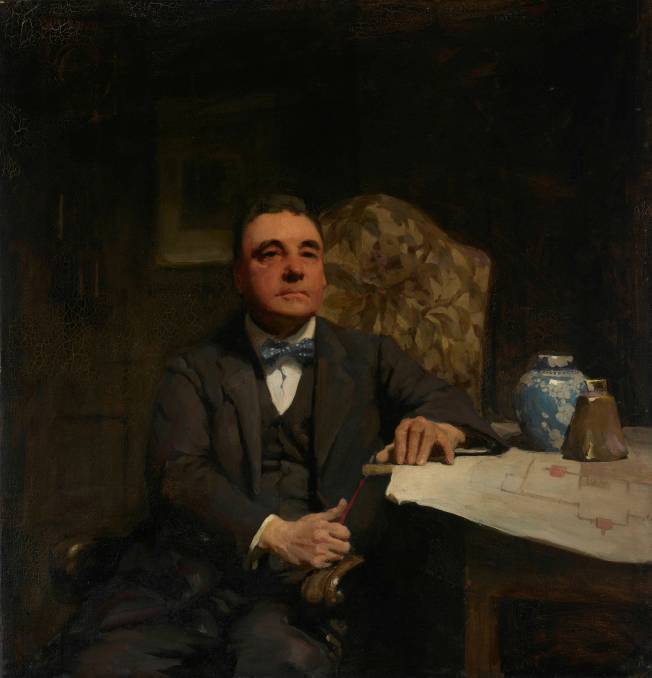 "Many artists destroy their works, so we know we're not going to find all of them. But through our research, we began to uncover the stories behind some of the works," she said.

"Visitors can expect to discover stories of identities from the past century, to see magnificent portraits of intriguing characters whose names have today been forgotten and works that have not been seen in public since first being exhibited in the Archibald Prize."

While selecting which works to include in the exhibition, each portrait selected for Archie 100 offers an exciting glimpse into a specific moment in time. Wilson said it was not just about showing the 100 winners.

"Offering an exhibition of just the winners was not going to represent the changing face of the prize over 100 years.

"Together, these works uncover changes in society in engaging ways, enabling people to experience how artistic styles and approaches to portraiture have changed over time."

Wilson said whittling down the selection to 100 was extraordinarily difficult.

"I think people will be both intrigued and surprised by the selection."

First awarded in 1921, the Archibald Prize was established following a bequest from former Art Gallery of NSW trustee and founder of The Bulletin magazine, JF Archibald, whose aim was to foster portraiture, support artists and perpetuate the memory of great Australians.

The open competition, which is judged by the trustees of the Gallery, has been awarded annually (with two exceptions: 1964 and 1980) to the best portrait, 'preferentially of some man or woman distinguished in arts, letters, science or politics, painted by any artist resident in Australasia'.

One surprise find was a 1943 portrait of paediatrician Dr Vera Scantlebury Brown by Winifred McCubbin - the daughter-in-law of Frederick McCubbin which turned up in Melbourne University's Medical History Museum.

'Dr Vera', as she was affectionately known, was a leader in her field, putting in place the universal structure of maternal and child health services and preschools in Victoria.

"With a lot of these works, we didn't know who the sitters were until we delved deeper," said Wilson.

"We were also actively searching for women artists. So going through the 6000 plus works, we started pulling out names and of course when we saw the name Winifred McCubbin, that was one we knew we needed to investigate further."

Another treat which turned up during her investigation was a 1979 painting of former PM John Howard, before he got the top job, by Sydney artist Josonia Palaitis.

"You really do a double take. There he is in a blue Hawaiian shirt, leather sandals and shorts, sitting in a garden with a red brick wall as the backdrop. It's not the sort of pose you would imagine John Howard striking today."

Arranged thematically, Archie 100 delves into the controversies and the commonplace, the triumphant and the thwarted.

"Of course, you can't have the Archibald without controversy," said Wilson.

While the exhibition doesn't include perhaps the most controversial entry of all time - William Dobell's portrait of fellow artist and Archibald Prize runner up Joshua Smith - which was all but destroyed in a fire, the exhibition does tell the story of the work and the hoo-ha surrounding it.

Debate erupted over Dobell's painting when it won in 1943. Visitors flocked to the National Gallery of NSW to view what was considered an outrageously modern work, but angered conservatives took legal action against the gallery on the grounds the painting was a caricature, not a legitimate portrait.

The case was heard in Equity Court during October 1944 and was seen by many as putting modern art on trial. The court eventually found in favour of Dobell's work.

Another painting which attracted criticism was William McInnes' 1924 portrait of Miss Gladys Neville Collins. McInnes was the inaugural Archibald Prize winner in 1921 with his portrait of Melbourne architect Harold Desbrowe Annear, and he went on to win the prize seven times.

But his winning portrait of Miss Collins, the daughter of an employee of the Victorian State Parliament, created a commotion because she was not considered to be "distinguished in art, letters, science or politics".

The exhibition itself is divided into several themes, including self-portraits and the idea of the cult of celebrity.

"Around a sixth of all entries have been self-portraits. For many artists it is like a calling card to show off their skill and prowess with the brush. For others it is a chance to project their own self-image - revealing how they would like others to see them," said Wilson.

"It's fascinating to observe how self-portraits have changed over time."

Artists' choice of subjects also offer glimpses into the celebrities of the time.

"Fame can be fleeting, but a portrait endures," said Wilson, pointing to miniatures which were popular in the 1920s.

"We have one by watercolour painter and miniaturist Ada Whiting of Jessica Harcourt from 1925, who was a well-known silent film star of the era. She was very much the 'It Girl' of the time. Now very few would have heard of her, but 100 years on her portrait remains."

Also featured over the years are people who were important in their communities or who went on to become national icons.

Goulburn-born feminist and writer, Dame Mary Gilmore, was painted 11 times for the Archibald - the most for any female sitter. She features twice in the exhibition - in Adelaide Perry's 1928 painting and then by Joshua Smith in 1943.

Another local hero who features in the exhibition is Queensland-born Aboriginal identity Tippo Powder, who worked as a tracker for Victoria and Queensland police, and was painted by English-born painter William Bustard in 1943.

World War II and the influx of European migrants also had a significant impact on the Australian art scene, which is reflected in the Archibald Prize entries of the time.

"During that period there were many emigrees from Europe such as Austrian-born Judy Cassab who escaped Nazi Europe and had a huge impact on portraiture here in Australia," said Wilson.

"From the rather staid portraits driven by academic tonal realism, there was a shift from the late 40s and early 50s."

And until 1945, every single work entered in the prize was hung on the walls. "The first exhibition had just over 40 works, but this steadily grew to around 200, until organisers realised all the entries couldn't continue to be shown, and so a selection was made from 1946."

What this did mean, however, was that there was a plethora of paintings being shown in the middle of the war, reflecting what was happening around the world such as Newcastle-born artist Alfreda Marcovitch's portrait of Matron Muriel Knox Doherty, now in the collection of the Australian War Memorial.

Marcovitch (born Goninan) went to Paris to study art and married a Yugoslavian academic. Just before the bombing of Belgrade she escaped to Australia with her children, but her husband didn't make it. Her subject - RAAF nurse Doherty - was one of the first people to enter the Bergen-Belson concentration camp in 1945 after it was liberated.

"When we first looked at the list of Archibald paintings and saw the names - M K Doherty by A Marcovitch - we had no idea who these people were, but then this amazing story unravelled."

While Ms Wilson is thrilled with the paintings they have tracked down, there is one she would have loved to get over to Australia for the exhibition.

In 1938 Nora Heysen - daughter of renowned landscape painter Hans Heysen -became the first woman to win the Archibald with her portrait of the wife of the Netherlands Consul-General in Australia, Mme Elink Schuurman.

"I did locate the painting, but it was overseas, and it was impossible to get it here with so many restrictions on freight due to Covid. So we are telling Nora's story in another way - as the first official female war artist during World War II."

Ultimately, Wilson is amazed that project has been such a success, given they weren't expecting a global pandemic to be thrown into the mix.

Where to see it

Audiences around the country will also have the opportunity to see a selection of works from this celebratory exhibition, Archie 100: A Century of the Archibald Prize, which will tour to eight venues across Australia from November 2021.

Coinciding with the centenary exhibition, Finding the Archibald is a three-part, prime-time series that follows Natalie Wilson's curatorial journey, while art lover and acclaimed actor Rachel Griffiths embarks on a personal mission - a cultural and reflective romp through our most coveted and controversial arts prize to find the one portrait that encapsulates the changing face of Australia over the last century. It premieres on ABC in June.