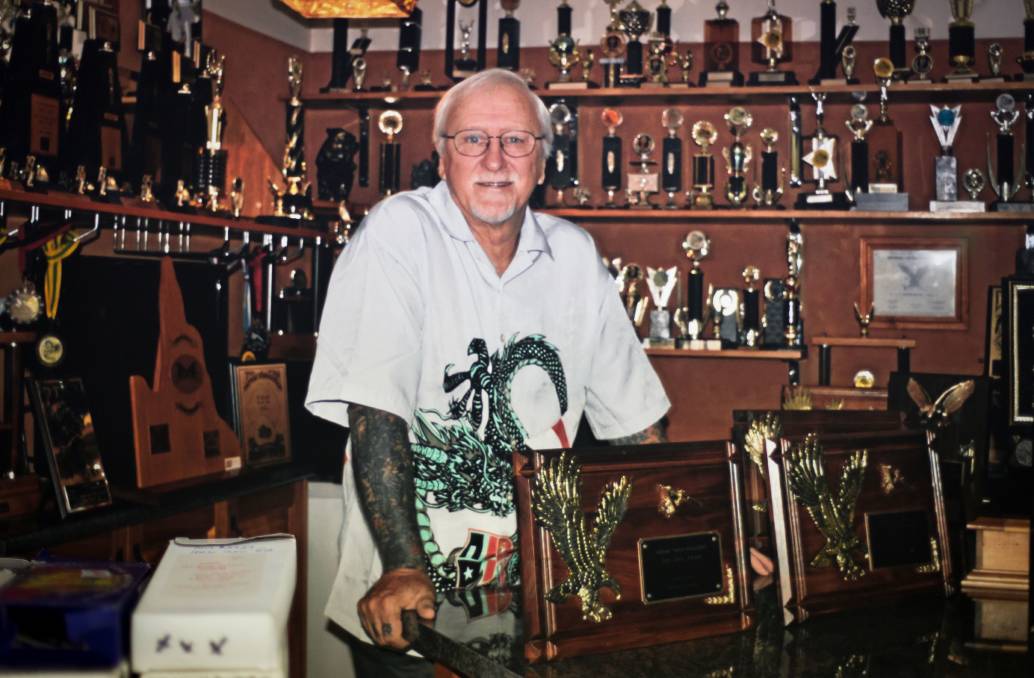 ONE OF THE BEST: Les Bowen, pictured in his trophy room, is one of Australia's most awarded tattoo artists.

Les Bowen has been illustrating bodies since he was 17. Sixty years on, he still loves it.

You might think legendary tattooist Les Bowen had seen it all after 60 years of inking bodies.

Think again. Les is endlessly fascinated at some of the designs customers conjure up for themselves as tattoos continue to push the boundaries of art and culture.

It might be an image taken from a video game or cartoon - say, The Simpsons. It might be an ambigram - a word that can be read in multiple directions

It might be anything, but with a lifetime of experience, Les takes it all in his stride, happy to accommodate most wishes.

But ask him to pick a favourite tattoo and he goes back to when he was newcomer, tattooing was a closed world and getting inked was seen as somewhat disreputable.

"I'm well ahead of all the things people ask for, but my preference is still for old-school designs and colours. They had a certain simplicity but at the same time a certain flair," he said.

Speaking from his Second Skin studio in Townsville, Les, 79, said these designs typically feature themes of nostalgia, patriotism, superstition and above all, sentimentality - memories of mums, dads and sweethearts waiting at home. 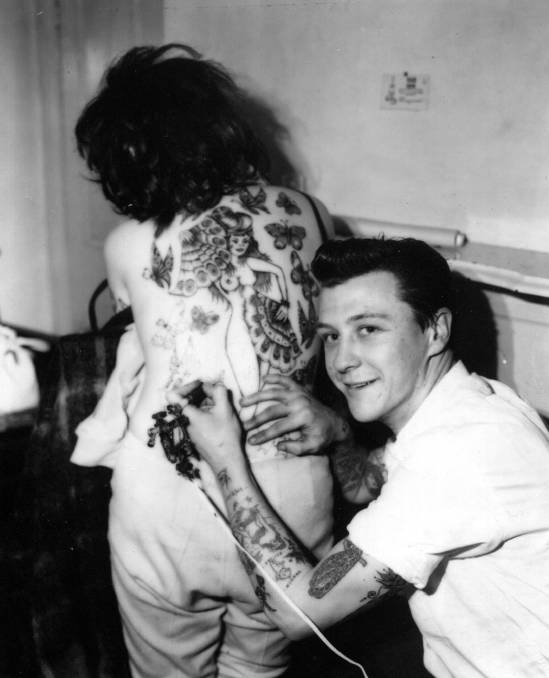 +4
Les Bowen over the years

Les was drawn towards tattooing early in life and started when was just 17. But it was by no means easy to get a foot in the door.

"I was always the best drawer in the class and won a lot of prizes. But with tattooing I was pretty much self-taught and had very little tuition because it was a secretive sort of business then.

"Nobody would tell you anything - they'd rather throw you out of the shop on your ear than reveal anything about their trade."

One reason, he said, was that there were probably only half a dozen tattooists in the country at the time.

Fortunately, the teenager found a mentor in one of them, a Brisbane taxi driver and tattooist named Norm Collette.

"He broke the cone of silence and started telling me things in the early days. So I sort of hold him responsible for the whole thing," he said with a laugh.

Still, he had a lot to learn.

"Experimenting is pretty much what I did. I expanded my skills and knowledge as I went along. - and my sympathies go out to my first customers. But really, I wasn't bad. I could draw - it was just a matter of learning to use those skills in a tattooing sense."

In fact, Les was his own testing board, using one leg as a canvass to try new colours, styles and techniques.

Les says his own tattoos were inked early in his career.

His favourites include a hula girl sitting under a palm tree with boats floating by, an image of Jesus with the word "Mother" below and two pairs of hands representing a handshake with each of his sons.

Today Les is famed worldwide, with a roomful of awards to his name and honorary membership of venerable associations such as the Japan Tattoo Club.

And of course there was the model Cindy Rae, well known to Australians in the 1960s as "the classy lassie with the tattooed chassis", who went on to become one of our first female tattooists.

The studios of Les's younger years are a far cry from those of today.

And the way you choose a tattoo design is entirely different now.

"Originally you picked one from the artist's portfolio, which were on design sheets hanging on the walls. You were limited to the amount of designs he had," Les said.

"But the internet can provide you with an image of anything you can dream of.

"Things go in cycles, It's very trend-oriented. One person will pick up on a theme as the next thing you know, everybody's getting it - especially if the original person is a celebrity of some kind."

He marvels at some of the clever designs, telling of a brother and sister who came into the shop wanting tattoos inspired by a famous segment in The Simpsons.

In it, Bart and Lisa agree to give a signal when they're about to fight but don't want to. Bart by swinging his arms around in circles and Lisa by kicking her legs up.

"The two who came in said that was the story of their lives, so that's exactly what they got. I loved their sense of humour."

As can be expected, some people make choices they come to regret, most often in matters of love.

"People go into a relationship that seems rock solid but then it crumbles and they want to change the name," Les said.

"That's not so hard, you can cover it with some other design - as long as it's black over black; a floral maybe. But removing it is usually a job for a laser clinic."

Another mistake is men getting the names of their newborns wrong, which sometimes happens when their partner has devised one with idiosyncratic spelling and apostrophe placement..

To avoid spousal wrath, Les keeps the name provided in a drawer as proof.

Important legal protections aside, Les has his own moral code when it comes to tattoos.

"I don't deny people's right to the sentiment but I won't tattoo anything obscene that can be seen by a little kid walking past on the street. It should not be on public display.

Nor will he I won't do anything that's a politically offensive - "nothing that will stop people walking around in the community being happy with one another".

"I won't do people's faces. I've learnt from many, many years that almost invariably people who do so all regret it, whether they're willing to admit it or not.

"Whether you choose to be tattooed in your lifetime, that's your business.

"But sometimes even though you choose to be tattooed, you may choose not to show you're tattooed. You can put a shirt on and do the buttons up, put a tie on and nobody would know you have one.

"But if you get your face done, you've denied yourself that privilege. It's not a wise thing to do on any level."

Nor does he do fingers.

"A lot of people have the romantic notion that they can get filigreed gold tattooed around their finger to perpetuate their devotion.

"So you put the tattoo on and it's nice and shiny and clean-cut, but after a fortnight or so the colour starts to fall out and spread.

"Then people come back and complain, even though we told them what would happen. So we just don't do them."

Tattooing has stayed in the Bowen family. Three of Les's five children have taken up the ink, while his wife Robyn looks after the business side of things.

Now semi-retired - he has said he loves his tattooing too much to ever walk away from it entirely - he said his clientele these days tend to be "a byproduct of my age.

"People who started out as my younger customers are now my older ones!"