HEARTBREAKING: Dementia Australia says diagnoses of the disease is projected to increase to 41,250 people by 2058.

Imagine being told your husband, not yet 60, has dementia. Julie De Napoli shares her story to help others.

Picture this: you're approaching retirement, and the things you've worked hard your entire life to achieve - more travelling, spending time with the grandkids, perhaps making a seachange - are almost within your grasp.

Then you're told your husband has younger onset dementia.

You thought dementia was a disease that only applied to "old people". You're blindsided. Worse still, it feels like no one understands and you have nowhere to turn.

This is the situation Julie De Napoli found herself in eight years ago when her husband Frank, then 58, was diagnosed with younger onset dementia. The former general manager, responsible for hundreds of people in his working life, could barely arrange the hands on a clock face in a cognitive test.

"It was a shock; I can't tell you how I felt. It was heartbreaking," Julie recalls. "Walking out of there, I was devastated."

And so began the couples' dementia journey - one that Dementia Australia says is experienced by around 28,000 Australians.

Without a major medical breakthrough, Dementia Australia says this figure is projected to increase to 41,250 people by 2058.

Despite this, Julie couldn't find any suitable local support, with services geared towards older people or those with more advanced dementia.

Thankfully, Frank's dementia is slow-progressing, and while he relies on Julie as his full-time carer, the couple remain active and social.

"The traditional places would have been detrimental to him," Julie said.

Elizabeth Baxter, a dementia services specialist with for-purpose aged and disability services organisation VMCH, is passionate about creating positive change for people living with dementia and their families. 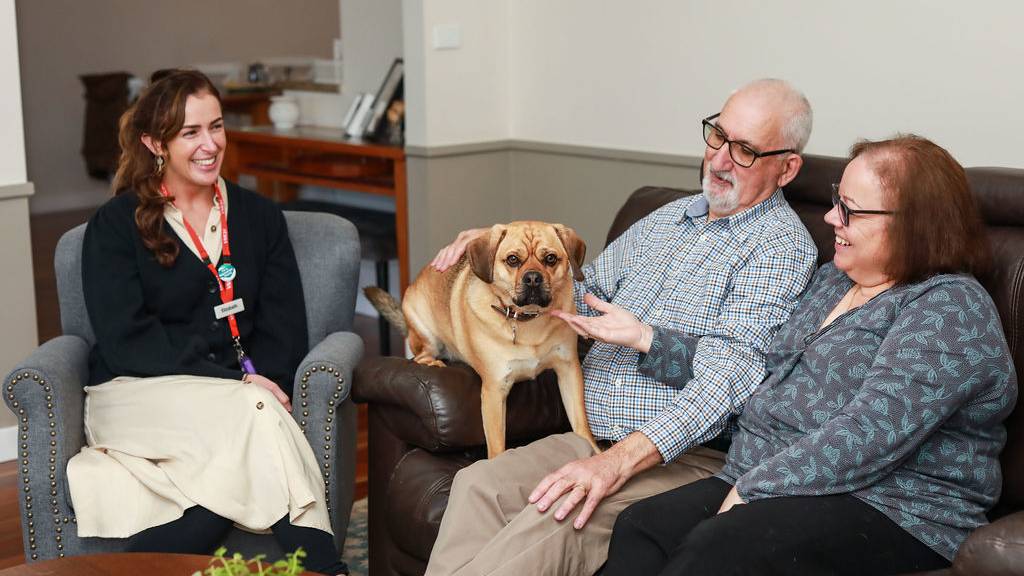 Sadly, she says the De Napoli's story is not uncommon.

"Funding for younger onset dementia support now falls under the NDIS, which means there's more red tape involved," Elizabeth said. As a result, many organisations have dropped their programs for this form of dementia.

"There very slim pickings for support in Melbourne's east - it's a huge service gap."

With this in mind, VMCH has joined Caladenia Dementia Care to form the Dementia Knowledge Network. Its aim is to collaborate with others in the sector, learn about new research, and find out what support people with dementia and their carers actually want and need to improve their quality of life.

Julie and Frank recently participated in some network focus groups dedicated to younger onset dementia, where Julie suggested a weekend away to Bendigo to visit the Elvis exhibition (Frank's a huge fan). Much to her delight, VMCH agreed and five people with their carers enjoyed a weekend away.

"We've always done everything together, so this was a lovely piece of normal," Julie said.

Frank also attends a twice-weekly social group at Caladenia, which is an hour round-trip from their home.

"He absolutely loves it there, but it would be great to find something in addition to this that was more local," Julie said.

She has also signed up to VMCH's Carer Support Program, and looks forward to connecting with other carers and taking time out.

Julie is determined to see more positive outcomes for people in her family's situation. She hopes sharing their story, and some advice, will help.

"I'd like people to know it's OK to talk about it [dementia diagnosis]. That's what I struggled with in the beginning. I didn't tell anyone other than our immediate family what was happening.

"I thought I was protecting him, that others may judge us. Now Frank tells people he has dementia - and it's really made life easier.

"Also, consider yourself. This was the hardest thing for me, to be kind to myself and to take time out.

"I didn't do that for a very long time and it wore me down. But then I saw that Frank was happy, and I thought, I've got to try to be happy too."

Elizabeth would like to hear from anyone living with younger onset dementia or their carer, or any organisations interested in offering support. Call 0409-413-709.