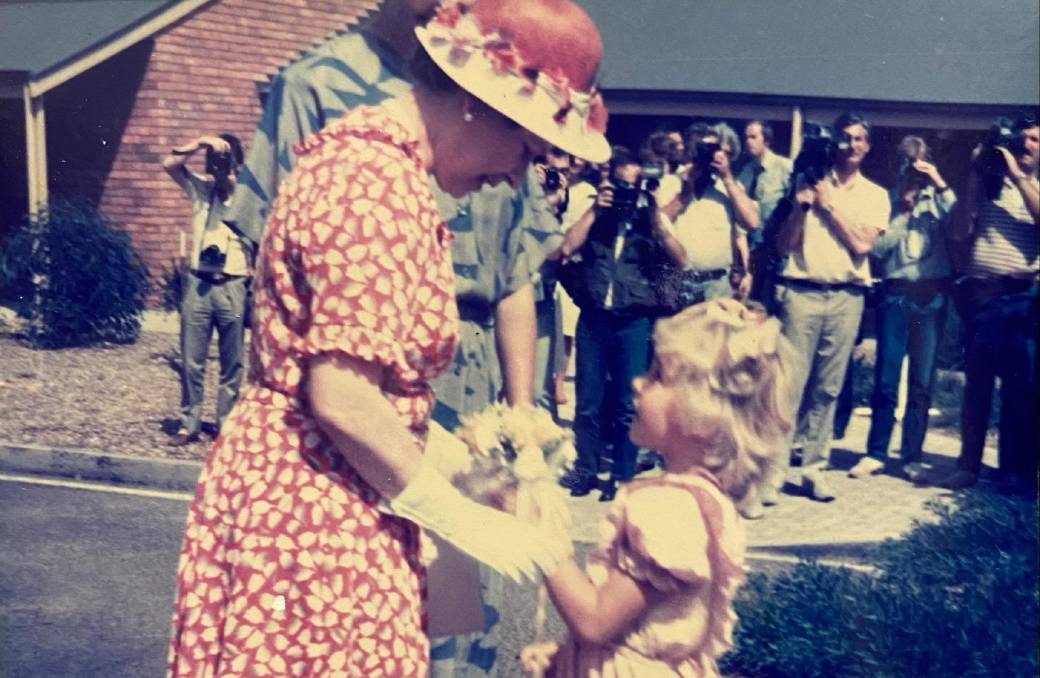 THANKS: Queen Elizabeth accepts a posy from five-year-old Kathryn Green during the royal visit to Whyalla that took place 36 years ago.

"I am sure the Queen smiled at me": Kathryn Perry remembers.

Kathryn Green wore her best, silky dress and a pair of burgundy, buckled shoes to meet the Queen in an encounter which she scarcely remembers.

Aged five years old, she handed a posy to Queen Elisabeth during the monarch's royal tour of Whyalla, South Australia in 1986 - the state's Jubilee year.

"I am sure she smiled at me," said Kathryn, now Kathryn Perry.

"Family members travelled to be there for the occasion and they asked me what happened and I could only say, 'she said thanks'."

The Queen was visiting the Yeltana nursing home where Kathryn's father Rob Green worked. He was offered the chance to bring his daughter to meet royalty at the home.

"Mum kept the shoes - they were burgundy leather buckle-ups - and the pretty silky dress that I wore," Kathryn said.

"I have daughters who played dress-ups while wearing the dress when they were youngsters.

"They played at posing for a photo like the one that my mother took of myself and the monarch on the day."

She said the Queen was an "incredible, marvellous lady".

"It was a big deal at the time, probably more so for my family," Kathryn said.

"I remember that one of my girls turned five years old and asked whether she would then get to meet the Queen because her mother did when she was five."

Kathryn's mother, Ruth Green, displays the photograph of the occasion in the lounge room of her house in Whyalla.

"We are always proud of our daughter, but that was a very special day," she said.

She said her young daughter had written compositions at school about the once-in-a-lifetime moment.

"We always say we must be special for the Queen to have come all the way to Australia for my daughter to give her some flowers," she said.

The story The day I handed a posy to Queen Elizabeth in 1986 first appeared on Whyalla News.