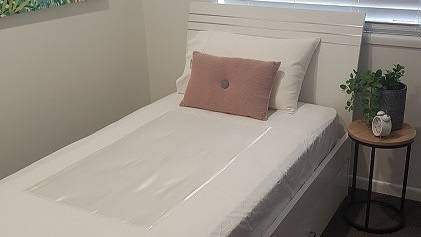 A GREAT NIGHT'S SLEEP: The Wonder Sheet +PLUS. Photo supplied.

A clever use of fabrics in a fitted sheet will make turning over in bed a breeze and help you get a good night's sleep.

A young girl's father had Parkinson's disease and started to find turning over in bed very difficult.

He asked his daughter, Dominique, if she could find something that would help him be able to turn over more easily.

She didn't find anything already on the market that could help her dad, so she decided to design something herself.

She worked out her father needed a slippery surface under his shoulders, back and hips so he could slide his upper body over without having to lift them.

The daughter designed a fitted bed sheet and called it the 'Wonder Sheet'.

It made sleeping and turning over for her father so much easier. He didn't have to sit up and hop his hips over anymore he could now just slide them on the satin panel that was under his shoulders, back and hips.

She left a panel of sheeting under the pillow and also at the end so her father could get traction with his feet which made sliding his hips over easier.

She found out it wasn't just helpful for people with Parkinson's disease but for anyone of any age with limited or restricted movement for any reason or even just general aging.

It has the satin away from the edges of the bed giving the user more grip and stability if they need it. Both designs having matching pillowcases and can be bought at your local stockist or online www.thewondersheet.com.au

Dominique hopes you find the Wonder Sheet as helpful and lovely to sleep on as her dad did.