Australia's first female prime minister has been out campaigning with Anthony Albanese as the race tightens a day out from polling day.

The 27th prime minister, and only woman to hold the role, sung the praises of her former colleague Mr Albanese on Friday, joining him in the key Adelaide seat of Boothby for the last full day of campaigning.

"I might look really young, but the truth is that we've known each other for more than 40 years, right back to when we were university students," she said.

"With the authority that the more than 40 years of friendship gives me, I can certainly say the following about [Albanese], he's ready to be Prime Minister, he will be a great Prime Minister."

The former Labor leader joined Mr Albanese as polls tighten a day out from polling day. Both he and Prime Minister Scott Morrison are in the midst of a cross-country marginal seat blitz in a last-minute bid to swing undecided voters.

In another rare post-prime ministerial intervention, Ms Gillard backed her left faction ally in a turnaround from the latter stages of her time in government when Mr Albanese switched support to rival Kevin Rudd.

She said on Friday that was in the "long and distant past".

The eleventh-hour appearance was Ms Gillard's first of the campaign in person, though the former prime minister has earlier urged Canberrans to retain Katy Gallagher via video and the post.

"What I want to see for this country is a government that cares about, values and includes women. And I know that a government led by Albo will do precisely that," Ms Gillard said, using the leader's nickname.

"So for Australian women, if you want to make a better choice, please, tomorrow, go to your ballot places, go to your polling stations and vote for Labor and vote for Albo to the Prime Minister. I am very confident it will be a government for women."

An ANU poll earlier this week found that female voters are three times more likely than men to be wavering voters at this late stage of the election campaign and thus better targets for the leaders.

Ms Gillard's appearance comes in the wake of a reckoning in Australian politics over the treatment of women in recent years, including harrowing stories about generations of bad behaviour in Parliament House.

"To change the culture of Parliament House, you've got to include more women," Ms Gillard said.

"And as a political party, we took that decision as long ago in the early 1990s and I am of that generation of Labor women." 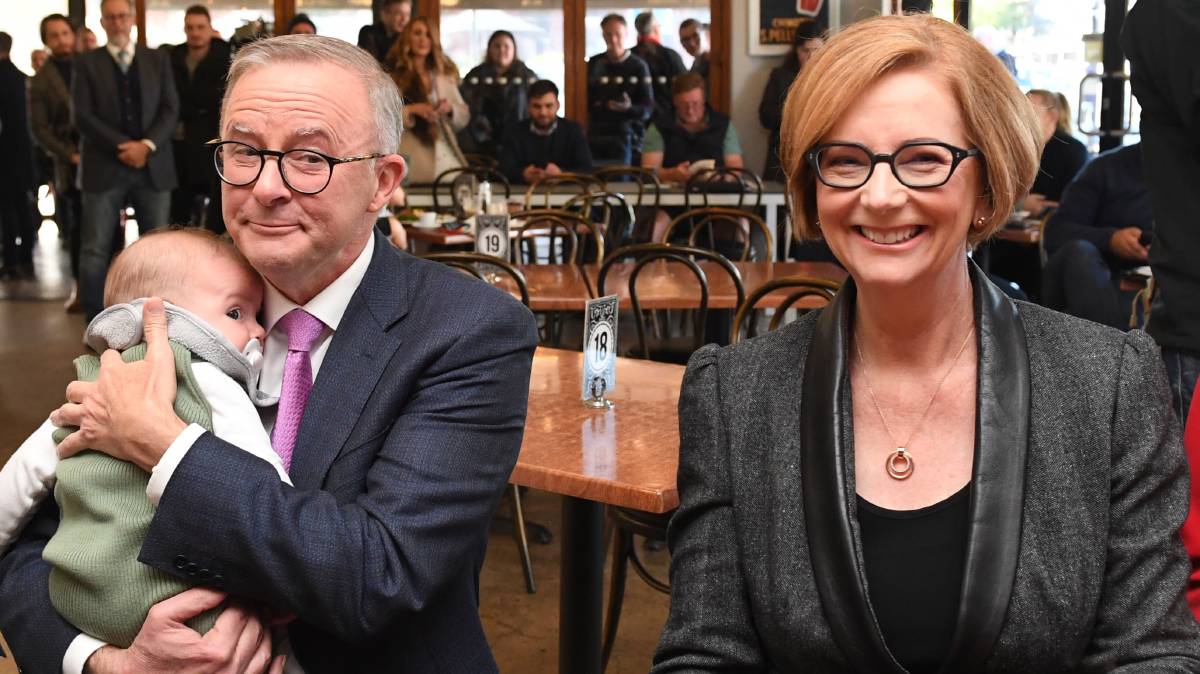 When reminded by a reporter that Ms Gillard "could not rely" on Mr Albanese's support in that support, she referred to the time as the "long and distant past".

"My clear memory of that period is that Albo and I worked together every day, we occasionally had differences of views," she said.

"We never exchanged a cross word. We worked together productively in the interest of the government every day.

"And when the opportunity came to vote for Albo as Deputy Prime Minister, I did."

Ms Gillard has had several international positions post politics career relating to education and gender equity as the inaugural Chair of the Global Institute for Women's Leadership.

"Julia Gillard is out there advocating for women, not just here in Australia, but throughout the world globally and is doing a fantastic job," Mr Albanese said.

The two appeared made an earlier appearance in the Adelaide electorate of Sturt for coffee along with Mr Albanese's partner, Jodie.

The event was almost derailed by three Liberal volunteers, who were ejected from the cafe while brandishing "it won't be easy under Albanese" placards.

The trio remained outside the cafe for the rest of the event.

Ms Gillard insisted Mr Albanese, who had branded that slogan offensive, had campaigned "magnificently" and did not need her advice.