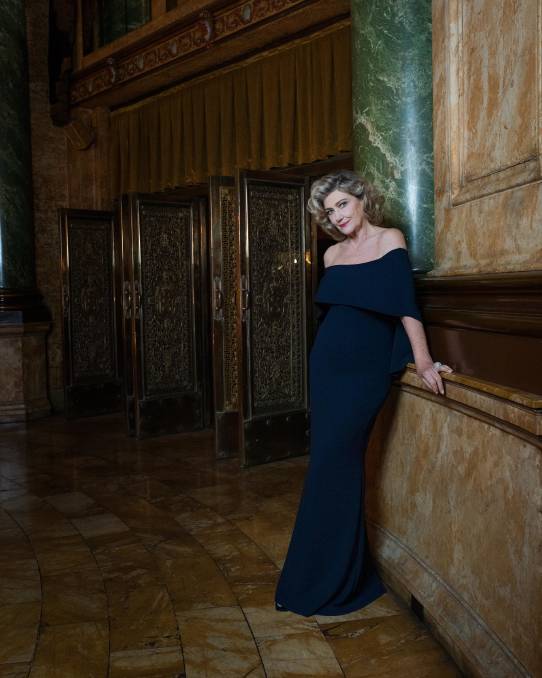 Tina Bursill opens up about playing Madame, the evil stepmother, in a Broadway production of Cinderella.

Oh, it feels so good to be bad. Just ask Tina Bursill who can't wait to play the evil stepmother in Cinderella.

The Tony Award winning Broadway production of Rodgers and Hammerstein's Cinderella opened at Melbourne's Regent Theatre on May 20, with seasons at QPAC, Brisbane from August 5 and the Sydney Lyric Theatre from October 23.

Returning to the stage after an extensive film and television career will be Tina to play Madame, Ella's stepmother, a vain and tyrannical woman only concerned with her wealth and the happiness of her two daughters at the expense of her stepdaughter.

Tina (TV's Doctor Doctor, Prisoner, Wentworth) will be appearing in the Sydney and Brisbane productions only because she is in mid-renovation after her home recently flooded and, like Cinderella, would like the help of a fairy godmother.

Matilda Moran (Titanic: the Musical, Les Miserables) and Bianca Bruce (In the Heights, Memphis the Musical) will play her daughters and Ella's stepsisters Gabrielle and Charlotte.

There have been a few COVID-induced false starts for the show, so Tina can't wait to tread the boards in this lavish production.

"We had an extensive rehearsal and I just cried," Tina said. "There was lots of singing and lots of dancing and it was just delicious.

"I am so excited to be a part of it. Madame is such an iconic character - a real pot pourri in many ways.

"Cinderella has been a part of all of our lives, irrespective of generations... it's the joy and the fantasy that we still have, it never changes.

"There's just something steadfast about fairytales and storytelling such as this and I'm really excited about this show.

"It's been a long time coming and the fact that it will finally see the light of day is hugely exciting.

"What a great opportunity for everybody to come and dust off those little COVID mothballs and enjoy being transported somewhere else."

With its fresh new take on the beloved tale of a young woman who is transformed from a chambermaid into a princess, Rodgers and Hammerstein's Cinderella combines the story's classic elements - the glass slippers, pumpkin, a beautiful masked ball and more - along with some surprising twists.

More than just a pretty face with the right shoe size, this Cinderella is a contemporary figure living in a fairytale setting. A spirited young woman with savvy and soul, she not only fights for her own dreams, but forces the prince to open his eyes to the world around him and realise his dreams too.

Celebrated and respected actress Tina's career spans decades, with a substantial body of work which has brought to life some of Australia's best loved characters on stage and screen.

"Believe it or not, I actually aspired to do musical theatre. My mother had the most beautiful voice and we would stage shows in our Sydney home," she said.

"We'd pop out from behind the kitchen curtain to perform. Alas, I was never a good singer but I've always had rhythm. I studied music for seven years but became involved in satire."

Starting her career in revues and political satire, such as The Great Banana Split, Scandals of '74 and The Son of the Naked Vicar, and musicals Godspell and Grease, before transitioning to other genres, Tina's characters are often cool, grounded and self-reliant women tinged with humour, including alcoholic Lenore in Time of Our Lives, single mum Hilary Scheppers in Heartbreak High and Maree the project mum in both A Moody Christmas and The Moodys.

In Doctor Doctor, her portrayal of family matriarch and outspoken mayor Meryl Knight has earned Tina two AACTA Award nominations, in 2017 for Best Supporting Actress and in 2018 for Best Actress, with each season of the series being nominated for Best Drama at the TV Week Logie Awards.

"Ah, Skyways," she said. "Those huge shoulder pads. We may laugh at them now but they do wonders for someone with a small head."

Tina starred in the feature film Jilted which earned her an AFI Award for Best Actress in a Supporting Role. Her other film credits include Wish You Were Here, Three Blind Mice, The Great McCarthy, Billy's Holiday, Heroes Mountain, Never Tell Me Never, A Good Thing Going, A Single Life, A Single Life, Aftershocks, Saturn's Return and Plains Empty.

Her theatre credits include Top Silk, Beyond Mozambique and Zastrozzi for Nimrod Theatre, Feather in the Web for Griffin Theatre Company, Boys Will Be Boys at the Sydney Theatre Company and Up for Grabs for which Tina received a MO Award nomination for Best Female Actor in a Play.