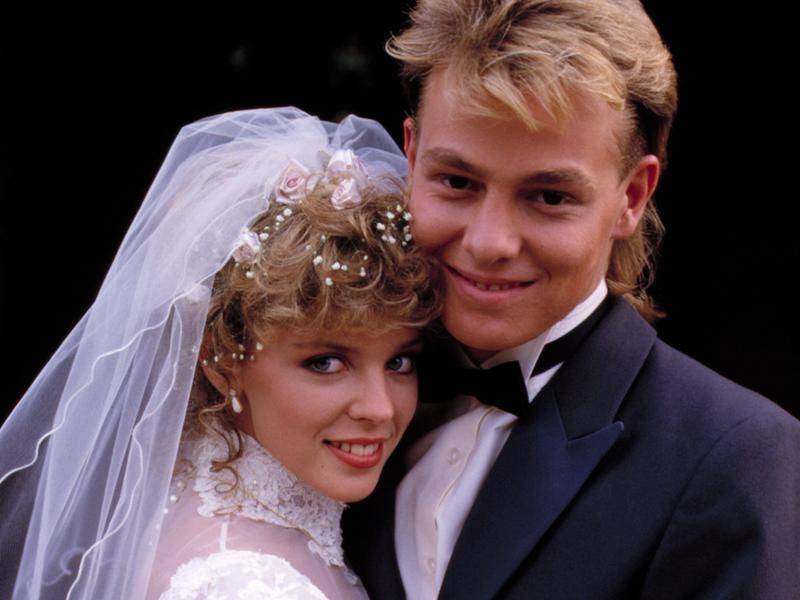 Kylie Minogue and Jason Donovan played Scott and Charlene until their departures in the late 1980s.

Scott and Charlene will appear again as part of the Neighbours farewell.

Kylie Minogue and Jason Donovan will return to Neighbours as much-loved characters Scott Robinson and Charlene Mitchell for the show's series finale.

The Australian soap first aired in 1985 and follows the lives of those living and working in the fictional Melbourne suburb of Erinsborough.

Neighbours has confirmed that Minogue and Donovan will return before the series, which centres on the cul-de-sac community of Ramsay Street, ceases production in June after being dropped by its broadcaster.

The show's official Twitter account shared a message from executive productor Jason Herbison which said: "Scott and Charlene are the ultimate Neighbours couple and it would not feel right to end the show without them.

"We are thrilled that Jason and Kylie have come home to play a very special part in our series finale."

A follow-up post continued: "It has been an emotional experience for them, for us and I'm sure it will be for our viewers."

Minogue and Donovan, who are both 53, played Scott and Charlene until their departures in 1989 and 1988 respectively.

The pair were Ramsay Street's power couple and a favourite with viewers.

In response to news of her return, Minogue posted a photo of what appeared to be a glimpse of a Neighbours script on Instagram, with the caption: "Omg!!"

Donovan posted a similar image showing the script from a different angle and captioned it with his co-star's Instagram handle.

Scott and Charlene's wedding episode was watched by more than two million Australian viewers when it first aired in 1987, and later pulled in an audience of almost 20 million when it was shown in the UK in 1988.

The ceremony became one of the most-watched TV moments of the decade.

After it was announced that the soap would be ceasing production, Donovan said: "I think it's sad... but I think it's time to celebrate Neighbours."

Minogue said she will be "forever grateful" for her time on the show.

The soap also launched the careers of Hollywood stars such as Margot Robbie and Liam Hemsworth.