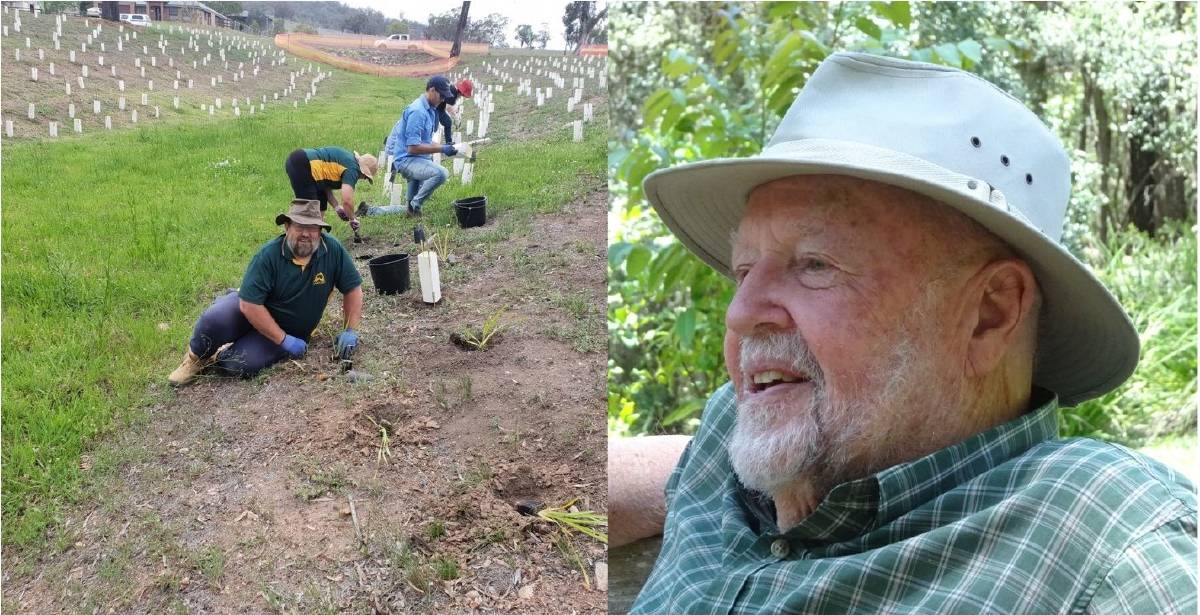 LEADERS IN THE FIELD: John Hughson (left) and Bill Piggott have been named honorary life members of Landcare NSW

John and Bill are big believers in the idea the backyard extends beyond the back fence.

JOHN Hughson and Bill Piggott are firm believers in the philosophy the backyard extends beyond the back fence.

John has been involved with Landcare for a quarter of a century.

The 65-year-old from Ellalong in Lake Macquarie was the convenor of the first Landcare NSW Gathering at Myuna Bay on the shores of Lake Macquarie in 2007. He had been involved with the national branch of Landcare for over a decade prior to this, but said a statewide organisation was needed to help coordinate, provide resources and support.

"In Lake Macquarie we were building up this great partnership with the community and council, working together on local patches of land - creeks, the bush, wetlands and beaches," he said.

"In 2007 things had started to wane a bit, with government support for Landcare.

"We were starting to go backwards and were losing people, which was the opposite of what we needed."

John went on to represent the Hunter region on the Landcare NSW Council for over a decade and served on Landcare NSW's Executive Committee. His has had two stints as Chair of the Hunter Region Landcare Network.

John said he had always had a passion for the natural environment. He became involved in Landcare after learning about native plants and their importance to local ecosystems during a TAFE course.

He said Landcare played a pivotal role in providing resources and information for those who wanted to help - educating them about what to plant and what not to plant.

"It's about promoting the natural values of native plants outside their (volunteers') back fence and the flora and fauna those native plants support."

John, who is now self employed and offers facilitation in training and land management, said the natural environment in the Lake Macquarie area had improved a great deal since he became involved with Landcare.

"The vegetation, the bushland, the beaches look much healthier, the flora and fauna is booming now, and there are a lot less weeds."

Bill - an 80-year-old resident of Berry on the South Coast, is a former chair of Berry Landcare and Shoalhaven Landcare and vice chair of South East Landcare. He has shown a deep commitment to the organisation at state, regional and local levels.

He represented South East Landcare as a Landcare NSW Council member for many years. Bill has also served as coordinator of a local Bushcare site, a member of the local Catchment Management Authority, and on local council working groups and committees.

He played a key role in organising the organisation's early Musters and was also the first recipient of the Gerald Carnie Memorial Award in 2015.

Bill spent over two decades working in Nepal as a medico for the WHO. He became involved in Landcare after he and his wife Leslie "retired" to a property they had purchased in Berry.

"We found the land was infested with lantana and spent the first few years removing that."

The couple started discussing the project with other locals, with a number of them ultimately getting together to reform the Berry Landcare group.

"I soon found that retirement did not exist. I was as busy with Landcare and a number of other community activities, as I ever was when I was employed.

"When you live as an expat in a foreign country, you don't have that feeling of being in a local community. That's what we wanted to achieve moving back to Australia.

"People who step up to Landcare are amazing people. It has (involvement with landcare) enriched our lives incredibly over the last 20 years.

"I think the value of Landcare for seniors is, not only is it an activity, it's an activity outdoors in natural environment, which is good for us.

Looking back on his time with Landcare, Bill said there were many highlights, one of which was helping to organise those early musters.

"A real highlight was the year that my son Peter, one of the early and longstanding Regional Landcare Facilitators, took on the role of facilitating the Muster."