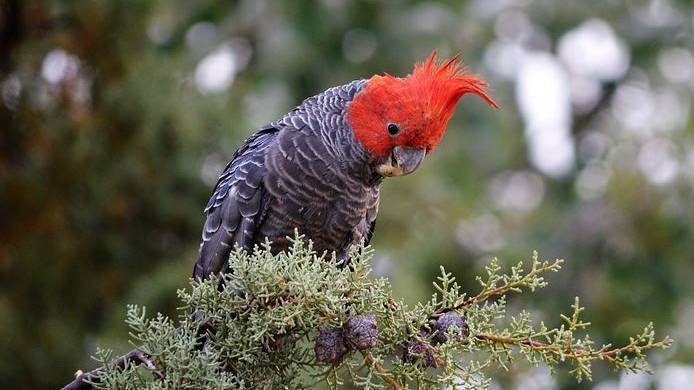 The Gang-gang cockatoo is one of the endangered Australian birds featured on Songs of Disappearance.

Songs of Disappearance features some of Australian best loved yet threatened birds.

Stuck for an gift idea for the bird lover in your family? Well here's one to tweet about, while consigning Adele's and Michael Buble's quests for this year's Christmas number one album to the birds!

An album featuring the songs of 53 of Australia's most threatened bird species has twitchers, environmentalists and animal lovers all aflutter and flocking together to get Songs of Disappearance' and send it to the top of the charts.

According to a report from BirdLife Australia, over 50of our country's most beloved birds are now as scarce as hen's teeth; threatened with extinction from habitat destruction and climate change.

In a bid to soar above the competition, perch itself high on the ARIA Charts and gain much needed attention this Christmas, the album Songs of Disappearance has been released, via www.songsofdisappearance.com

Compiled in conjunction with The Bowerbird Collective and featuring bird call recordings by renowned wildlife documenter and nature recorder David Stewart, Nature Sound, 'Songs of Disappearance' also includes a three-minute compilation of all the species on the album creating a magical chorus of rare birdsong unlike anything heard before.

Among the birds featured on the album is the Gang-gang cockatoo, the Western Boobook, the Australian Eclectus Parrot, the Purple Crown Fairy Wren and the Satin Bowerbird.

"This album is a very special record with some rare recordings of birds that may not survive if we don't come together to protect them," said Paul Sullivan, chief executive of BirdLife Australia. "While this campaign is fun, there's a serious side to what we're doing, and it's been heartening to see bird enthusiasts showing governments and businesses that Australians care about these important birds."

With artists like Michael Bublé and Adele nesting comfortably at the top of the ARIA albums chart over the last decade's worth of Decembers, 'Songs of Disappearance' is a way of putting a more important kind of song into the national consciousness this Christmas.

At just $10 for a download and $12 on CD, the album is flying out the door and is set to ruffle music industry feathers.

By coming together to purchase the album, Australian bird lovers are looking to ensure that these birds have the best chance at survival.