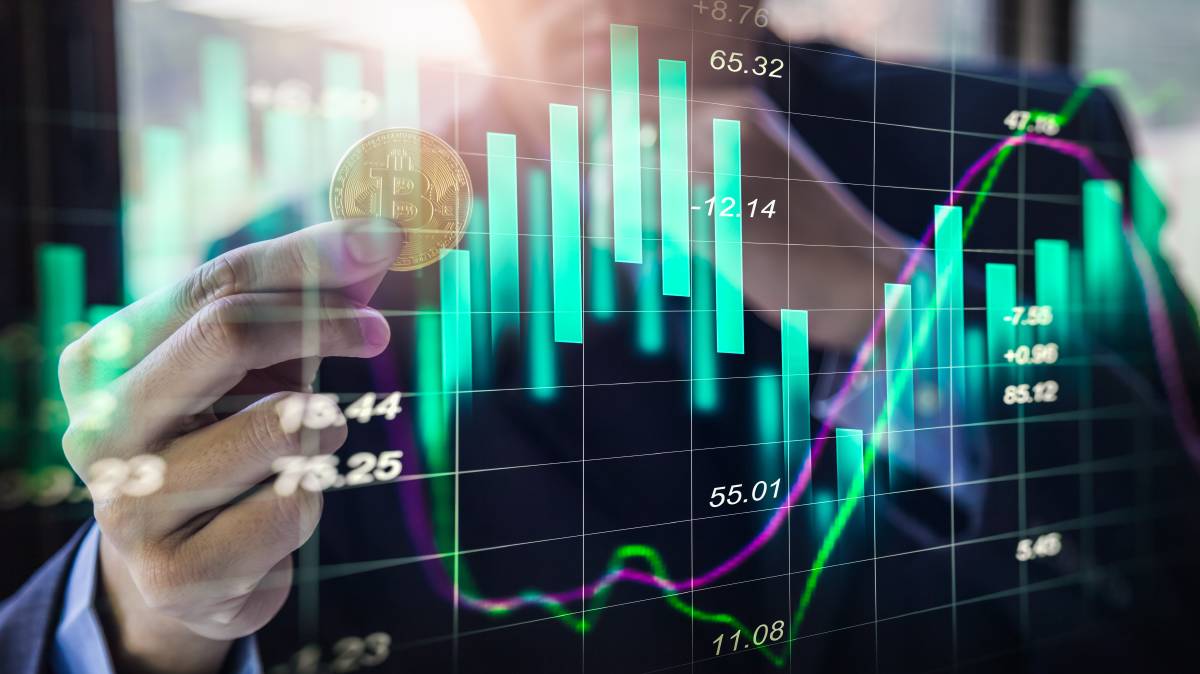 Why Bitcoin has some investors' tongues wagging. Picture: Shutterstock.

Your wife is right: buying cryptocurrencies is a gamble.

Cryptocurrency continues to dominate the minds of many investors.

The following email from one of my readers, Jack, is typical of those flooding my inbox:

"I'm a senior citizen and want to invest in Bitcoin but haven't made the commitment, as my wife doesn't like the risk factor and has heard bad things about people losing money in Bitcoin. I registered my interest with two sites, and as a consequence I get emails and phone calls every day from people offering their help to get me get started. What should I do? "

Let's go back in time for a moment.

Bitcoin is said to have been invented by Satoshi Nakamoto - even though nothing is known about him or her.

The concept was that there would be a ledger of many connected computers, all checking individual transactions by way of solving puzzles. Each block of transactions is linked to the block that came before. Hence the term "blockchain".

In 2009, "Satoshi" published the source code for Bitcoin, which enabled anybody to download the code and start solving computational puzzles. The winner for each block got 50 Bitcoin, which at the time was worth very little.

Satoshi claims the puzzles were ridiculously easy at the start, but got tougher as time went on.

The total amount of Bitcoin that could exist was capped at 21 million, and the reward for solving a problem would halve every four years, so that by 2140 the final Bitcoin would be created.

Of course, Bitcoin has a great attraction for those on the wrong side of the law.

Transactions are anonymous, untraceable, free from the gaze of the tax man and can be used for everything - including buying arms and drugs.

In early 2011 a Bitcoin was worth one dollar, but the moment the underworld started to take a big interest the price shot up to $30.

In 2013, the USA's Senate Committee on Homeland Security held a hearing into Bitcoin that concluded: "these virtual currencies are not in and of themselves illegal."

Immediately, a Bitcoin's value shot up to over $500 and has been rocketing away of since albeit with massive volatility as FOMO takes over.

Such a massive price jump attracted competitors, and hundreds of alternative cryptocurrencies were launched. Bitcoin is the most well-known crypto, and some people claim it will become a new world currency. It's anybody's guess, but one thing is certain: its volatility is a major impediment to Bitcoin becoming a new global currency.

An essential element of any currency is stability. If I had a housing loan of $400,000 I would not expect it to double in 12 months.

Another issue for cryptocurrencies is there is no consumer protection available. If you lose your Bitcoin password, you have lost your Bitcoin - there is no head office you can ring to recover your password.

If you sign up with a dud website and lose all your money, the government won't come to your aid. Buying Bitcoin is caveat emptor: there's no protection, or safety net, or recourse.

Yes, Jack the sharks are circling. And like you, I get emails every day offering to teach me how to trade Bitcoin and make a fortune.

But if these people are successfully trading Bitcoin and making a fortune, why would they be cold calling you and me?

Your wife is right: buying cryptocurrencies is a gamble. You should never "invest" money that you aren't prepared to lose in them; and you should run a mile from anybody who offers to trade on your behalf, or teach you "the secret".

But if you are still determined to go ahead, your first port of call should be the ASIC Money Smart website, where a search on "cryptocurrency" will provide you with loads of information, as well as an analysis of the types of cryptocurrencies that are available.

A relation aged 25 is now earning $150,000 a year in a two-year construction job. He and his partner will be paying for a new house and land package due next year. He asked me if he should be salary sacrificing now to save tax.

I told him I did not think that was a wise thing to do in the light of his proposed house purchase and all the costs that would go with that.

Your books mention salary sacrificing to super rather than paying off a home loan, but am I correct in thinking this would only be applicable to somebody approaching retirement?

You are spot on - it would be crazy to be piling money into superannuation at such a young age when they are planning to buy a house in the foreseeable future. In any event salary sacrificed into super is not a massive tax saver in his situation.

His employer should already be paying $15,000 a year super which leaves only $12,500 available to be salary sacrificed. The sum of $12,500 in his pay packet would lose tax of $4937 whereas money contributed to super would you lose $1875. The tax saving of $3062 is small in the scheme of things when you consider the loss of access for possibly 40 years.

It's a different matter entirely for someone aged 50 or more who want to pour money into superannuation to make sure they retire with no mortgage.

My partner and I live in Melbourne and bought a house on the south coast of NSW for my daughter to live in and for us to use for holidays. She owns 40 per cent of the house and we own 30 per cent each.

plan to leave my 30 per cent to her in my will and my partner plans to leave his 30 per cent to his daughter. Will she need to pay CGT when I die? Would it be better to transfer my share to her before I die?

If you give it to her now, you'll be liable for capital gains tax yourself. However, if you leave your share to her in your will no CGT would be payable and until she disposes of the property. This could be many years in the future - furthermore provided the property continues to be her residence the impact of CGT should reduce over time.

She should be thinking about ways to buy out your husband's share because the situation could be unsatisfactory if he dies and 30 per cent of the property is then owned by somebody else.

I am 60 and work full-time. I'm trying to plan my finances for retirement in six years. I've recently come into an inheritance of $170, 000 and am in a quandary as to where to invest it. I would like to be able to grow the funds but also to be able to access the money relatively easily after my retirement.

The money is really for travel and possible small renovations, as my husband's super is a defined benefits scheme and generates $2415 per fortnight, which covers our cost of living expenses.

We own our home and have a $300,000 mortgage on an investment property, valued at $850,000. I'm thinking about either buying and renting out another property, although would need to get a large loan, or perhaps buying shares or putting it into my super which is now just $60,000. I'm also not sure about the tax implications of shares vs super. I would welcome your advice on how best to invest the money.

I really don't think taking out a large loan at your age is a wise thing to do. Superannuation is the perfect place for you to invest the money as accessibility is not an issue. You have turned 60 which means you can withdraw money from your fund as soon as you retire from your present job or at age 65 whichever is the earliest.

The money could be contributed as a non-concessional contribution and there would be no tax on the contribution or on any withdrawals. Keep in mind that shares are a type of asset, whereas superannuation is a vehicle that lets you hold assets in a low tax area. You could have each way bet by having your money in superannuation with a large part of the selected asset mix in shares.

I have been reading with interest your comments on what happens if a couple are on the age pension and one of them dies leaving the surviving spouse over the single asset cut up point which is currently just $593,000. Does replacing worn carpets and blinds come under allowable ways of spending money on renovations?

Yes - there are a number of allowable ways for a pensioner to spend money. These include renovations, replacing household items and travel.

The story What is Bitcoin and is it worth investing your money in? first appeared on The Canberra Times.