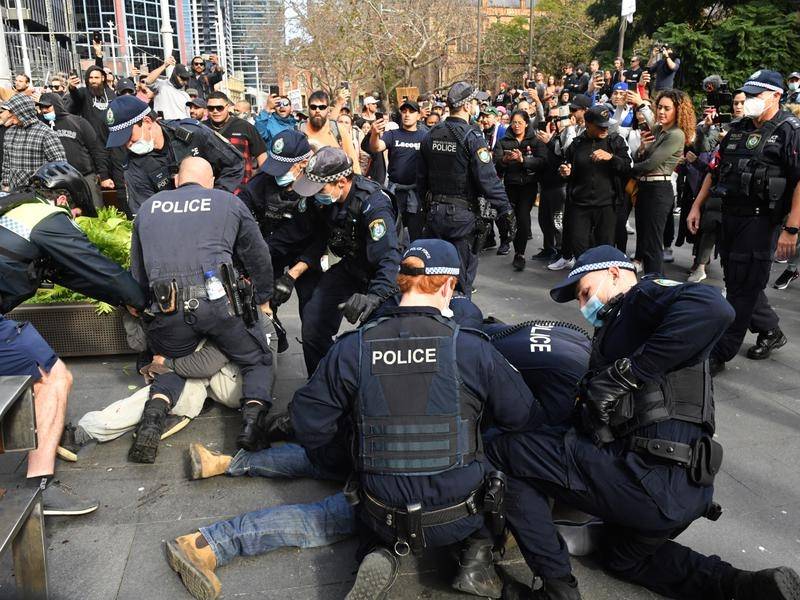 Police are planning to prevent another anti-lockdown protest in Sydney.

An alleged organiser of a proposed anti-lockdown protest in central Sydney this weekend has been sentenced to at least three months' jail for failing to compl...

An alleged organiser of a proposed anti-lockdown protest in central Sydney this weekend has been sentenced to at least three months' jail for failing to comply with NSW public health orders.

Police, meanwhile, will station some 1400 officers around the CBD on Saturday to ensure the protest doesn't occur.

NSW Police Force says Khallouf was staying at a North Sydney hotel but was located on Thursday afternoon at Hornsby train station.

Khallouf, an online anti-lockdown activist, told officers he was lost and couldn't give a reasonable excuse for travelling to Hornsby.

He was arrested and charged with failing to comply with public health orders, encouraging the commission of crimes and making false representations prompting police involvement.

Khallouf appeared at Hornsby Local Court on Friday and pleaded guilty to all offences.

He was sentenced by magistrate Robyn Denes to a non-parole period of three months' imprisonment, with an aggregate term of eight months.

NSW police and the government, meanwhile, urged all state residents to not attend any planned protests amid COVID-19 lockdown.

"Do not engage in any illegal activity, full stop - we still do not (know) the impact of that initial protest," Premier Gladys Berejiklian said.

"When people are diagnosed, you ask them what they've done, I doubt they'll tell us they were at an illegal protest. Let's not underestimate the impact of those massive events on spread."

Police Minister David Elliott said the lockdown marked "the toughest days the people of NSW have faced in nearly a century" but protests would be met with "full force".

"(Police) will not hold back," Mr Elliott told reporters.

People would be stopped to confirm their reasons for travelling into the Sydney CBD were essential.

Splinter protests in regional NSW would also be monitored.

Mr Elliott encouraged people to express their freedom of speech online or through the media, rather than in person.