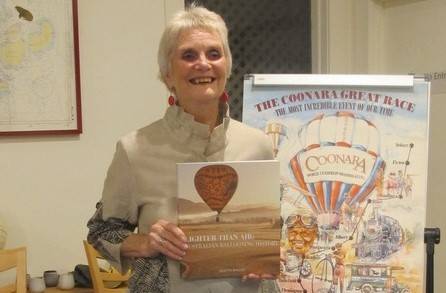 Colourful history of hot-air ballooning unearths a pioneer whose name should be legend.

Australians have always loved a battler, and in the early days of hot-air ballooning in this country, Charles Henry Brown was truly one of them.

The cash-strapped English postal clerk with crippled hands and big dreams built the first manned balloon to fly in Australia, from Richmond to Plenty, in 1858.

But instead of joy, the feat led to despair (no spoilers here!), and he went on to die young and largely forgotten, with even his descendants knowing little of his exploits.

Helene Rogers, author of the lively new history Lighter than Air, is determined to correct that. Of all the remarkable individuals she brings to vivid life, Brown is front and centre.

The Melburnian admires Brown, who was brought out on contract by the entrepreneurial showman George Coppin, owner of the Cremorne Gardens amusement park on the Yarra River at Richmond.

"I got quite close to Brown, because I followed his life and found his descendants," Helene told The Senior. And there she struck gold - a trove of his letters and postcards found in the bottom of a wardrobe that the family generously gave her permission to use.

"Brown was passionate about flying and such a chronicler that he recorded everything for posterity," she said. He also chronicled all the major ascents to date. It was largely from this material that the book came to be.

Above all, Helene admires Brown for his persistence. She writes of him: "Despite criticism and hurtful comments; despite poverty, misfortune, early failures and his physical disability, Charles Brown never allowed obstacles to prevent him becoming an aeronaut. Whether we regard him as fanatical, obsessed, selfish, stubborn, foolish, or as honourable, strong and far-sighted, we do have to give him credit for resilience and determination in the face of adversity."

The book is full of colourful detail, such as the first balloon-related death in Australia, which actually happened on the ground as the result of a riot, the conflict between those who saw ballooning as more science than showmanship, and the "petty jealousies, criticisms, accusations and manoeuvring between aeronauts".

No memorial exists to mark the Richmond ascent but Helene did succeed in finding Brown's weed-covered grave at Melbourne General Cemetery. A commemorative plaque was placed there.

Helene's interest in hot-air ballooning began in the 1980s.

"I was doing a journalism course and we had to do a mock radio interview with someone notable. But I didn't know anyone notable!

"Then a Peregrine Expeditions travel catalogue arrived in the mail, and I saw that this fellow Chris Dewhirst had flown over Mount Everest in a balloon and was coming to Melbourne to show his film about it. He agreed to see me so I watched the film beforehand and it blew me away."

Helene soon realised little had been written about our ballooning history. "So I decided to fill in gaps, not knowing how big the gaps were!"

With working and raising a family it turned out to be a 30-year project. But this year gave her the time to finish it and she couldn't be prouder.

Pierre Maigret attempted a balloon ascent in the Sydney Domain before a crowd of 10,000. A furnace of straw soaked with wine heated the air for the balloon, but it failed to take off and an accident split the envelope. Four thousand people, believing they had been cheated, began a riot which lasted four hours. A pole came down and cracked the skull of a young boy named Thomas Downes, who, taken to Sydney Infirmary, died there. - HELENE ROGERS