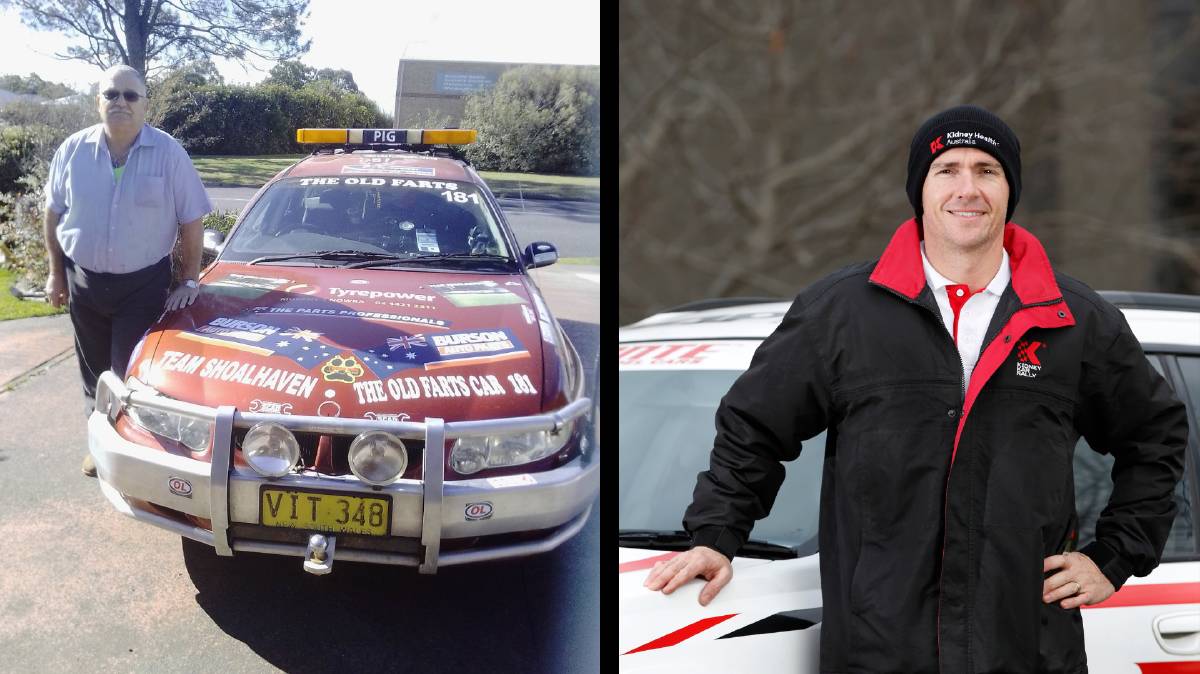 BOMADERRY ex-truckie Ian Usher has been driving fund-raising efforts for community groups since the age of 18, when, as a keen weightlifter and bodybuilder, he was a founder of Shoalhaven PCYC in Nowra.

Since then, Ian, 65, has dedicated his life to raising funds for those in need - especially kids - mostly by competing in car rallies. In 15 years, he has competed in more than a dozen.

Next up will be as a member of the Old Farts team in the Kidney Kar Rally, which is scheduled to kick off on October 23. His great mate Mick Hudson will be beside him.

The Kidney Health Australia event will this year see 52 rally cars take on a fun but gruelling six-day challenge over the backroads of NSW to raise funds to help youngsters with kidney disease.

After leaving Mudgee, the drivers and crew will bump and jolt their way through Meadow Flat, Lithgow, Oberon, Cowra, Adavale Lane, West Wyalong, Hay, Finley and Narrandera before finishing in Young.

Supercars veteran Lee Holdsworth will be a guest in the event, which is not a race but a test of skills, with drivers having to navigate the off-road terrain.

Locals will get the chance to see the cars up close as they pass through the towns and the communities are urged to get behind the rally and help fundraising efforts.

Ian, who likes to go by his nickname "Pig", is no slouch at fundraising, either.

An early effort was in 1981, when he and his wife Shirley started the group Shoalhaven City Truckers to raise money for the family a fellow truckie killed in an accident at Cobargo.

More shows followed, this time to raise funds for Shoalhaven Hospital's children's ward. Thousands of dollars were brought in.

In 2000, with Harry Potter all the rage, Ian bought a 1968 Chevrolet pickup and with his mate Bobby Dix, stretched it out one metre, fitted it with the body of a 1990 Toyota Coaster bus, painted it in the colours of Hogwarts Express (registration HOG-934) and participated in several Variety bashes.

"It was a beast: We put a Perkins 6354 truck motor in it and a six-speed overdrive gearbox. The bloody thing would do 160 km/h.

"You should have seen the kids' faces when one of us hid behind Harry and pretended to have him answer questions by lifting his hands. They were absolutely over the moon."

The two friends took the vehicle as far afield as Perth, Tasmania, Brisbane, Bundaberg, Cairns, Darwin and even Bamaga at the very tip of Cape York, raising money wherever they went.

Ian says he enjoys smaller rallies because of they are more personal. Some bashes he has been on have had more than 100 vehicles, "which means at least 200 people".

But the Kidney Kar Rally event has only 52, bringing locals and participants together more closely.

"I'm a virgin, they say, because this will be my first rally with them.

"But I'm really looking forward to mixing with all the 'rallytives'- that's what they call each other - who I haven't met before."

He also said has some close friends on dialysis: "So anything that I can add will be a bonus to those involved that need our help."

Sadly, owing to Ian's declining health and mobility - he suffered a broken back several years ago and has kidney problems himself - he has had to wind down most of his community volunteering of late.

But it's not enough to keep him out of the car - this year a rebuilt Holden Berlina - saying he has dedicated himself to Kidney Health.

"Anything that I can add will be a bonus to those that need our help," he said.

"I'd also like to take the opportunity to thank all the local business people who have supported me over the years."

For more details about the rally or to donate to the teams taking part or the individual towns' fundraising pages, visit www.kidneykarrally.org.au