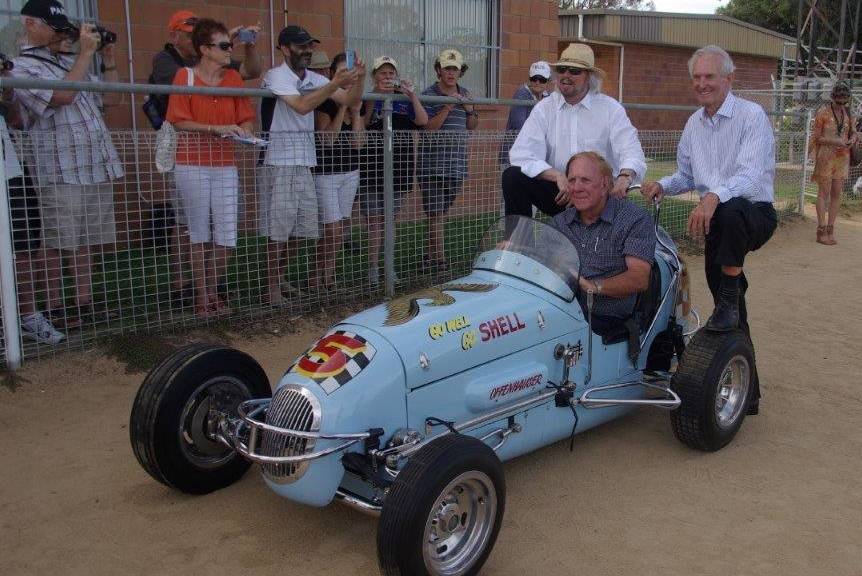 ROLLING BACK THE YEARS: Bill Goode behind the wheel of an Offenhauser and flanked by Barry Gibb and Bill Gates at the Vintage Speedcar Association clubhouse in 2013.

The two go back a very long time - to February 14, 1959, to be precise. But Bill said they spoke as if it were yesterday.

He was working in the pits at Redcliffe Speedway that day when he heard through the tinny, four-inch Tannoy speakers, three young voices the world would come to know and love.

Barry, 12, and his twin brothers Maurice and Robin, 9, soon to become known as the Bee Gees, had come to sing for pennies.

Bill, who became a promoter after a long and successful racing career, was working in the pits that night because his marshall hadn't arrived.

"One of my drivers, Bob McMahon, came to me and said there were three young boys outside and they wanted to come and sing for a coin toss at half time. So I said, 'Well, get them in'."

The boys were to sing on the back of a truck owned by Duke Bowman, a local fruiterer and one of speedway's backers. But they weren't strong enough to get on the back.

"So another of our drivers, Barry Watt, got an oil drum so they could hop up," Bill recalled

They lads came on in the interval.

"I was chasing the stock bike riders out through the gate when I heard these beautiful, melodious voices coming through the speaker. It stopped me in my tracks. I thought, geez, they're good."

The crowd clearly thought so too. The Gibbs made 10 quid that night - a whopping sum to take home to their mum.

After the meeting, Bill asked Bob McMahon where the lads lived. He told him it was just down the road on Oxley Avenue.

"So I said can you call in on your way home and tell them I want to see them. And that's what I did the next day."

After introducing himself, Bill asked them to sing him a song. Barry replied: "What would you like?" So he asked how many they had.

"He had written about 180," Bill said. "They sang me an Everly Brothers song and I was absolutely amazed."

Bill quickly got in touch with 4BH disc jockey Bill Gates, who he knew from advertising his home construction business, to get a second opinion before putting the boys on contract.

"He came down on the Monday or Tuesday night and was pretty stoked with the idea. I asked him if he wanted to join in the company and promote them and he said yes please!

"As well as coming up with the name Bee Gees, he organised the 4BH studio for free to record, got young Keith Fowle to make the donuts we sent to record companies and arranged a little three-piece band so we could put them up on the stage.

"We did that Sunday after Sunday for several months."

Bill sent records away to companies but there was just one reply: come back in a few years.

"But this was no good for the boys. They knew they wanted to live off music."

By now the Gibbs' father Hugh was becoming involved, heading into Bill's office almost daily trying to find gigs for his sons.

But due to circumstances, neither of the two Bills was able to keep looking after the Bee Gees. So they gave the management contract to Hugh, along with the guitar they bought Barry.

The rest is astonishing.

A few years later, the Bee Gees moved to England and later the US, where they recorded 30 Top 40 hits, including nine US No.1s. With more than 200 million records worldwide, they remain one of the best-selling groups ever.

The band ended in 2003 following the sudden death of Maurice. Robin died of cancer in 2012, leaving Barry as the band's sole surviving member. Their younger brother Andy - briefly a star in his own right - died in 1988.

Bill is sad that Barry is the only one left now and speaks highly of him. "I've never met a nicer man. He's such a kind, generous and loving person. And he's still writing songs."

During the birthday phone call, Barry told him: "If it wasn't for you and Bill Gates, we would never have got as far as we did".

Bill said Barry has always been loyal, especially to his remaining family (his late mum Barbara and their sister Lesley) and friends such as Dick Ashby, his personal manager since 1970.

Most recently the pair caught up when they shared happy memories before the opening of the memorial Bee Gees Way in Redcliffe. Bill said it was a terrific day - and not just for him.

"When Barry arrived, he hopped out of the car with a roving microphone and spent I'd say a good hour coming up and talking to people. He then sung a song.