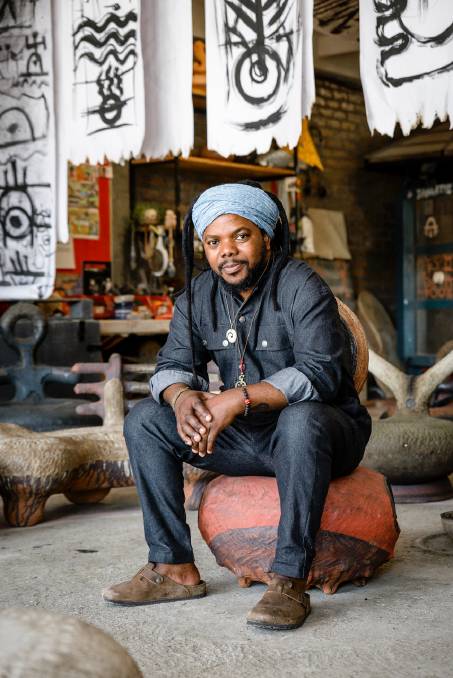 SOUTH AFRICAN GUEST: Andile Dyalvane, who in collaboration with Zizipho Poswa, will bring a large installation named iZilo, which is based on clan totemic symbolism.

From across the watery expanse they come bearing wonderful things. The Indian Ocean Craft Triennial starts in WA on September 17, bringing with it 200 artists from eight countries.

A rich selection of works will be on display at the festival, which celebrates our everyday rituals and preoccupations through the medium of craft and the hand-made.

Significant works by 37 lead artists will be front and centre, to be presented at two locations: Fremantle Arts Centre and John Curtin Gallery.

A further 30-plus exhibitions and activities will be presented by institutions, galleries and art spaces in collaboration with individual craft artists and craft-specific groups.

They include Uday Singh, a farmer and accomplished ceramicist from the Indian state of Madhya Pradesh, who is known for his highly collectable, sculpted clay cows and deep understanding of natural materials and animal forms.

With no two figurines alike, he imbues each of his cows with its own personality, poise and decorative features.

To help him support his countrymen in his Covid-ravaged India, he is bringing with him 50 ceramic cows that can be bought in advance. Visit www.indianoceancrafttriennial.com/iota21-patrons.

Cyrus Kabiru (Nairobi Kenya) is a self-taught sculptor who has gained acclaim for his talents in transforming scrap metal into intricate eyewear and pseudo-radios. Driven by a desire to turn waste into something new. He he makes use of recycled and found materials he picks up on the streets of Nairobi.

Melissa Cameron (North Perth, WA) has demolished her garden shed and is making a huge "jewellery" piece from the galvanised steel. Her creative re-purposing comes in response to the destruction of the Juukan Shelters. The large-scale work requires 1000s of hours of hand cutting and sawing the tough metal.

Ishan Khosla (India) is an acclaimed artist and designer who works on projects that combine design, technology and craft in different ways. For IOTA21 he will tell the story of pressing contemporary issues, such as deforestation, factory farming and plastic packaging, by employing traditional Indian illustrative techniques, such as the kavaad, the traditional travelling story telling device, and picchwai.

Thania Petersen (Cape Town, South Africa) will exhibit new and previously made highly intricate embroidered rugs for IOTA21. In choosing the Muslim prayer mat as the defining form of her works, she reminds us of the power of ritual and daily prayer, She is also informed by her Cape Malay heritage, the practice of Sufi Islamic religious ceremonies and the creolisation of cultural practices.