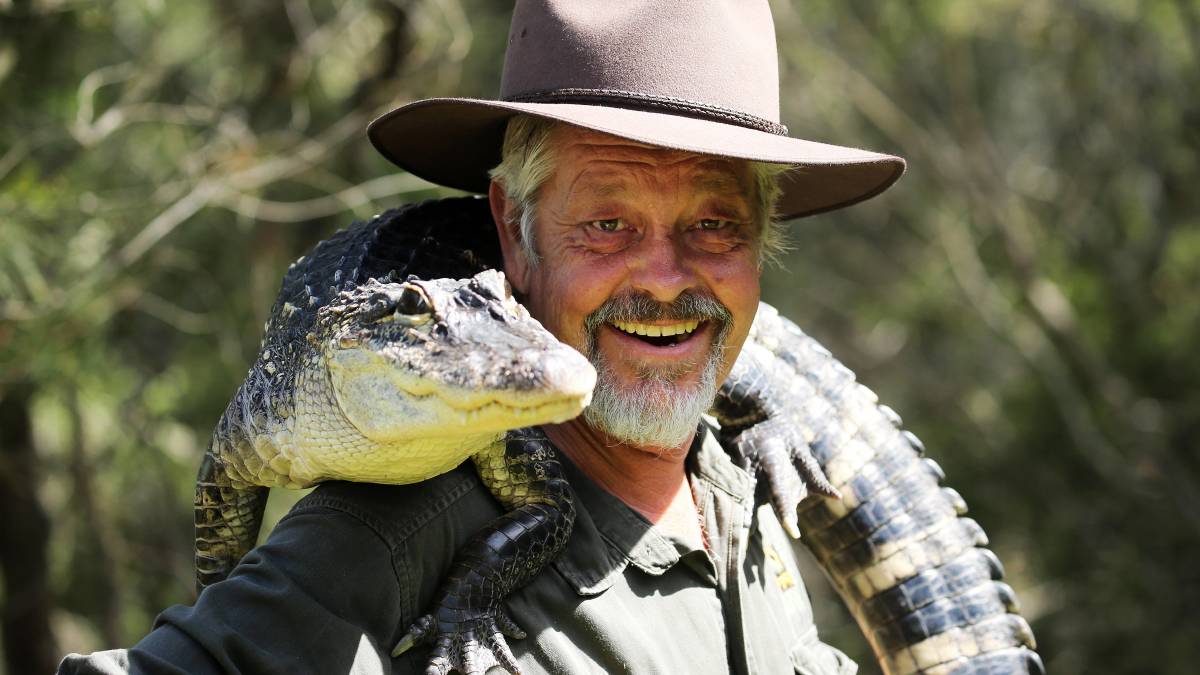 SNAP HAPPY: Ranger Mick Tate has been introducing audiences to Australian animals for almost 30 years at the Australian Reptile Park in NSW.

"If you're a carpenter, sooner or later you're going to hit your thumb with a hammer. If you work with dangerous animals, it's a numbers game."

NOT everyone would smile being face-to-face with a crocodile. But for ranger Mick Tate, it's all part of his daily job - and he loves it.

Mick has been a ranger with the Australian Reptile Park on the NSW Central Coast for almost 30 years and has just performed his 60,000th reptile show.

"It's been a dream every step of the way being able to wake up every morning and talk about animals all day to visitors," the 58-year-old said.

"I like to make jokes along the way and keep everyone's attention the best I can, but there's no better feeling than standing in front of everyone while a Lace Monitor decides to go to the toilet on you, mid-show."

For Mick, its all about educating the people he meets. It's estimated that over five million people have witnessed one of his talks.

He also heads up the education section at the park and visits schools where he introduces many students to their first ever snake.

"In all honesty, I have had people come up to me after a show and say thanks to my snake bandage tutorial he was able to save his brother's life and get him to hospital to receive some of our antivenom," he said.

Prior to working at the park, Mick worked as a chef. He said it was a bit of a change to go from catering for hungry people to facing off with hungry reptiles.

"I like the big alligators and feeding the crocs. The boring things are feeding the dingoes, it's a bit like dogs eating dinner, and I wish the koalas would do a bit more. They mostly just look at you with disdain."

And yes, he knows what it feels like to be bitten by a crocodile.

"I was grabbed by an alligator badly on the hand, the bone was visible." +5
Ranger Mick has a lot of duties around the Australian Reptile Park including walking the Komodo dragon, feeding the alligators and giving educational talks.

But Mick doesn't blame the animals. He says it's all just part of the job.

"If you're a carpenter, sooner or later you're going to hit your thumb with a hammer. If you work with dangerous animals, it's a numbers game."

But it's not the bites that he finds the most challenging part of the job.

"It's being fresh and 'on' all of the time," he said. "You do so much on stage and when the microphone is on you don't have any private time.

"You have the persona for the stage and consistently maintaining that all the time is mentally exhausting."

Despite racking up such a big milestone, Mick has no plans on retiring any time soon.

Why you should never smile at a crocodile

Mick vividly remembers the day Elvis the saltwater crocodile came to the park in 2007 after being relocated from the Northern Territory where he was wreaking havoc on fisherman's boats.

At just under five metres long, Elvis is one of the largest crocodiles in captivity.

He has a reputation of being Australia's crankiest crocodile after he shot to worldwide fame in 2011 when a video of him stealing a lawn mower off his keepers went viral.

We all looked at each other and thought bloody hell, what have we done? - Mick Tate, Australian Reptile Park ranger

"It was a case of being careful what you wish for," Mick said.

"We all wanted a big, aggressive crocodile.

"We all looked at each other and thought bloody hell, what have we done?"

Mick said the park's last crocodile, Derek, famous for his three legs, was "with the program" and just wanted to be fed. Elvis on the other hand, was a real showman.

"Elvis bangs his jaws together four or five times when you feed him. It's like a shot gun."

"If we had a swear jar in the crowd, we would make an easy five grand." TOP CROC: Elvis the saltwater crocodile is fed by a park ranger.

Mick first started feeding crocodiles about 25 years ago as part of an apprenticeship with former park owner John Weigel.

When Elvis isn't hungry and doesn't come out of the water, Mick and the other rangers call it the walk of shame.

"It's humiliating not being able to feed him in front of 1000 people. I would rather him misbehave than ignore us."