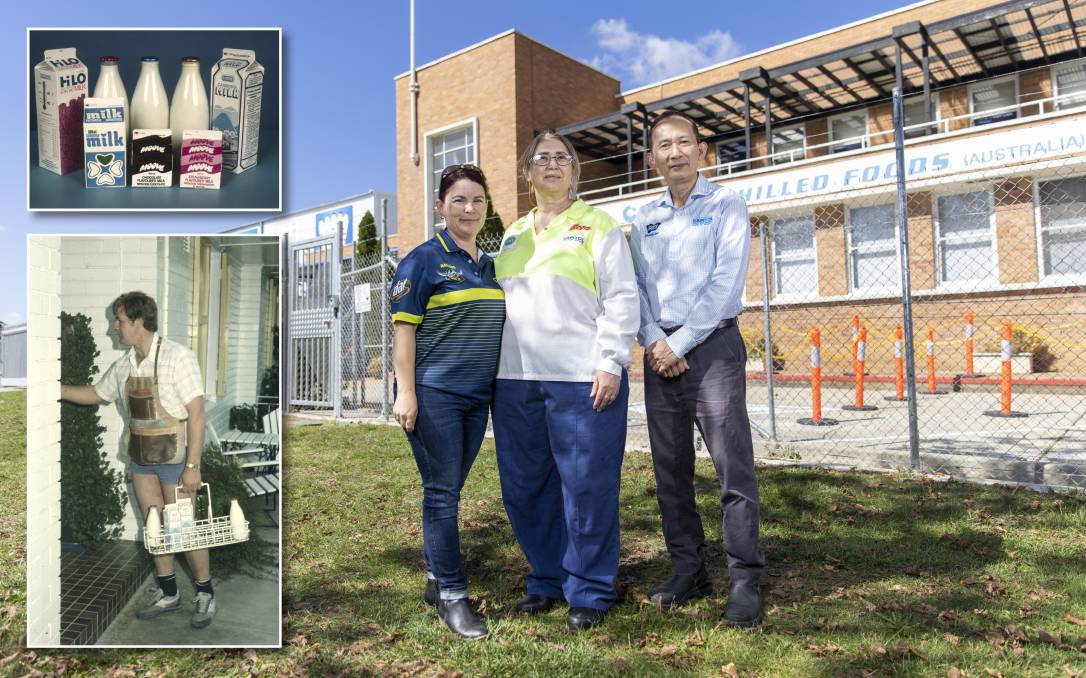 From the milkos of the past to the mainsaty products in our fridges, Canberra Milk has become a part of the heart and soul of the capital. Pictures: Keegan Carroll, Supplied

What is your favourite Canberra Milk memory?

The clink of glass bottles being dropped at the doorstep by the milko might be a thing of the past, but Canberra Milk is still very much part of the hearts and minds of Canberrans.

This year marks 50 years since the Milk Authority Act 1971 was established in the ACT, legislating the supply and sale of bulk raw milk in the territory and leading to the creation of Canberra Milk, a much-loved brand in the national capital. 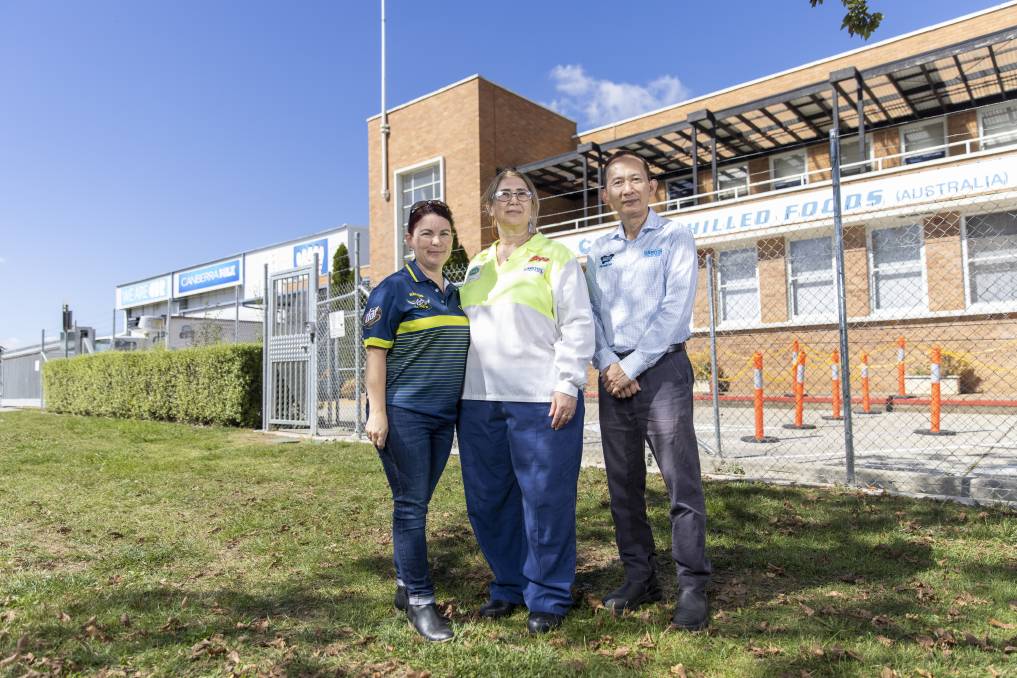 But dairying has a long history in Canberra and the Canberra Milk 50th anniversary celebrations includes a special exhibition at the Canberra Museum and Gallery called Don't Forget the Milk, tracing right back to the beginning. The first dairy, the Duntroon Dairy, opened in 1832 and as many as 13 dairies operated in Canberra over the next 150 years, even as far flung as Kambah.

The exhibition also celebrates Canberra Milk in all its guises over the decades, with ephemera from CMAG's own stores as well as from private owners. There are also some wonderfully evocative photographs (milkos at the front door) and interviews with key people, played in a loop in the intimate gallery. 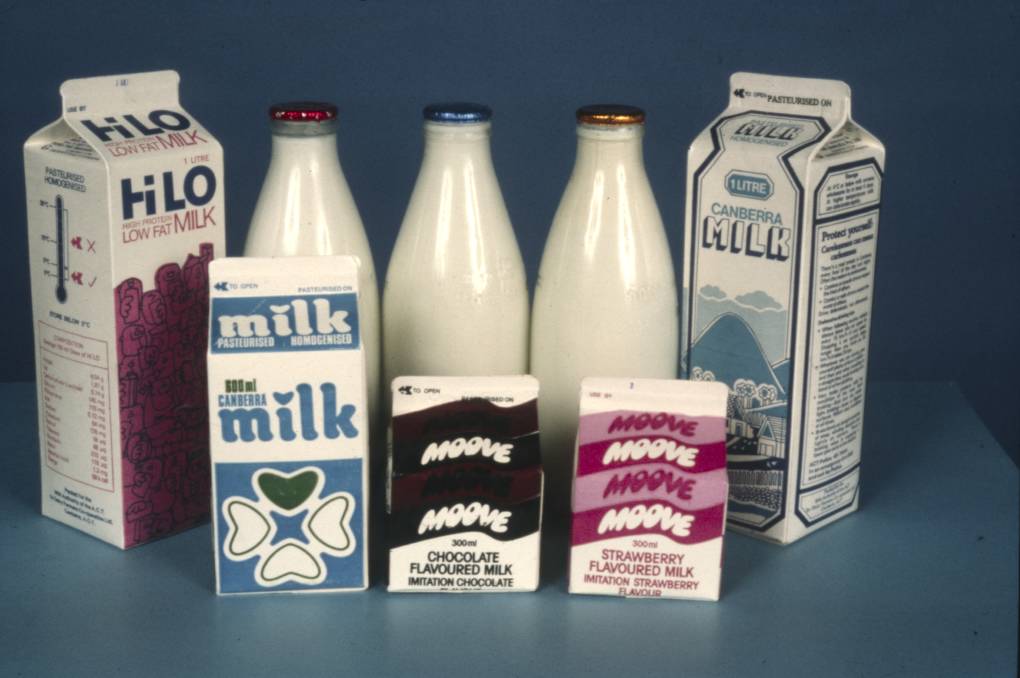 And the 50th year of Canberra Milk is also one for celebration as it remains in Australian hands after almost being sold off to the Chinese. 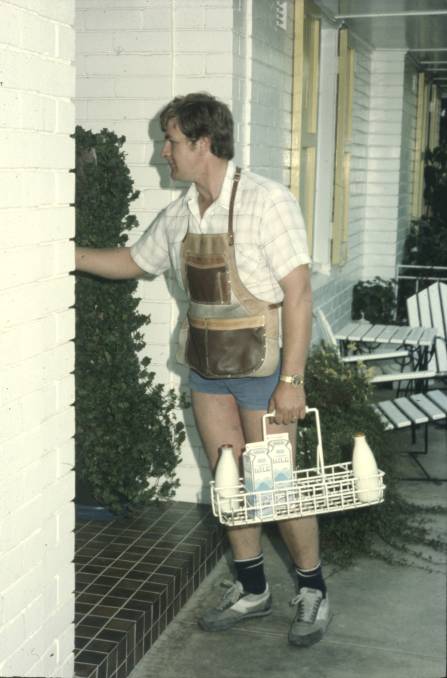 A 1970s-era Canberra milko with short shorts, obviously designed for quick runs on and off the truck. Picture: Capitol Chilled Foods

In 2019, Capitol Chilled Foods, which manufactures Canberra Milk, was set to be sold to the China Mengniu Dairy Company, as part of the larger Lion dairy and drinks business. That deal collapsed in 2020 due to approval from the Foreign Investment Review Board "unlikely to be forthcoming".

Then came in a new contender - the Australian-owned Bega Cheese Limited - which in late 2020 bought the Lion dairy and drinks business for $560 million, including Capitol Chilled Foods.

Capitol Chilled Food employs 70 Canberrans and services more than 2000 stores and cafes in Canberra and surrounds. Under the new ownership, the Mildura Street factory will receive $3 million in capital investment this year.

"We are confident Canberra Milk will be strong for another 50 years," Mr Ness said.

In fact, Canberra Milk has returned to front and centre of the Canberra Raiders jersey for the first time in 25 years. And Raiders lime milk is on the shelves for the first time since 2015, only at Coles. #Upthemilk has also become part of any social media celebration of a Raiders' win.

(Anyone who attends the Don't Forget The Milk at CMAG, takes a photo next to the old-school Canberra Milk mascot and posts it to social media, also receives a Raiders lime milk from a special fridge installed in the foyer of the gallery for the duration of the exhibition.) 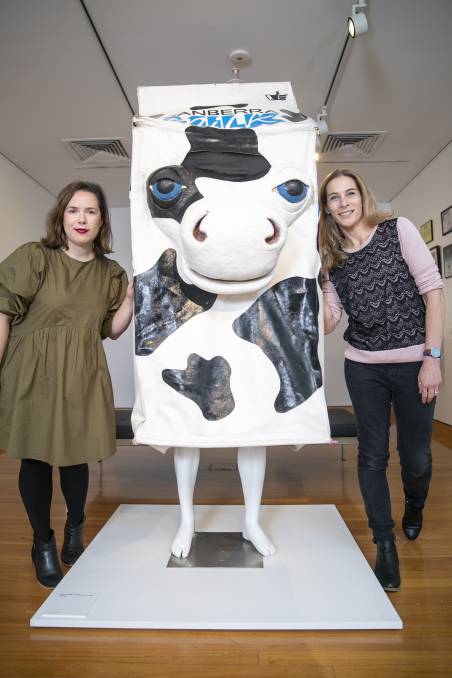 CMAG senior social history curator Sharon Bulkeley said it was important to recognise the longevity of a local brand such as Canberra Milk and the meagre agricultural history of Canberra as the city continued to evolve.

"I think the city is changing so quickly, it's nice for people to look back and realise that for a long time we did have a really strong dairy industry here that employed a lot of people," she said.

"Obviously, as the city grew and the lake was filled in and property prices went up, those dairies closed down. But it's nice for Canberra Milk to celebrate the legacy of local milk in the area. They still source milk from the region and process it all here. So that long tradition of dairying is still continuing, just in a modern and progressive way." 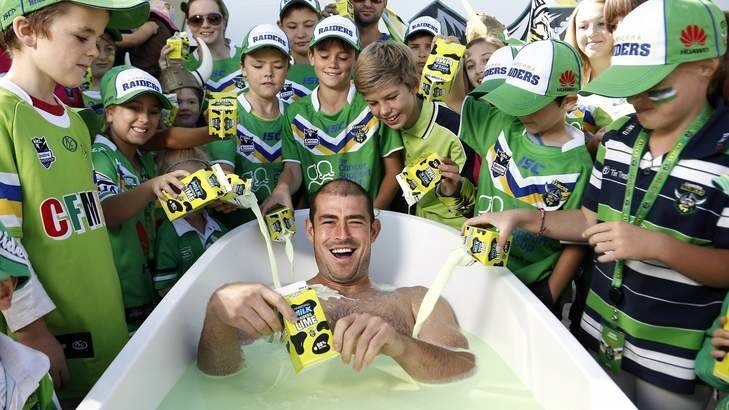 The first dairies in Canberra hand-milked the cows and and the milk was transported in horse-drawn carts to neighbours. The dairies were family-run businesses, with each new generation taking over the reins. And it was hard work.

"When you see how primitive it was early on - I mean for us it's ducking to the servo to grab two litres of milk," Ms Bulkeley said.

"But back then the cows were milked by hand, the milk was delivered by hand and then literally ladled out - 'How much do you need today?'. Our generation now is very spoilt in how accessible milk is."

Sandy Stuart had the first and last commercial dairy in Canberra, off the Monaro Highway in Fyshwick, before selling it to the Canturf turf farm in 2002. The Goldenholm dairy started milking cows in 1928, the first commercial diary in Canberra. Sandy's grandfather, also Sandy, owned it from 1946 and the operation passed on to Sandy's father Dugald, and then to Sandy and his wife Brenda. They had almost 200 cows and, at one stage, 4 per cent of the Canberra market. 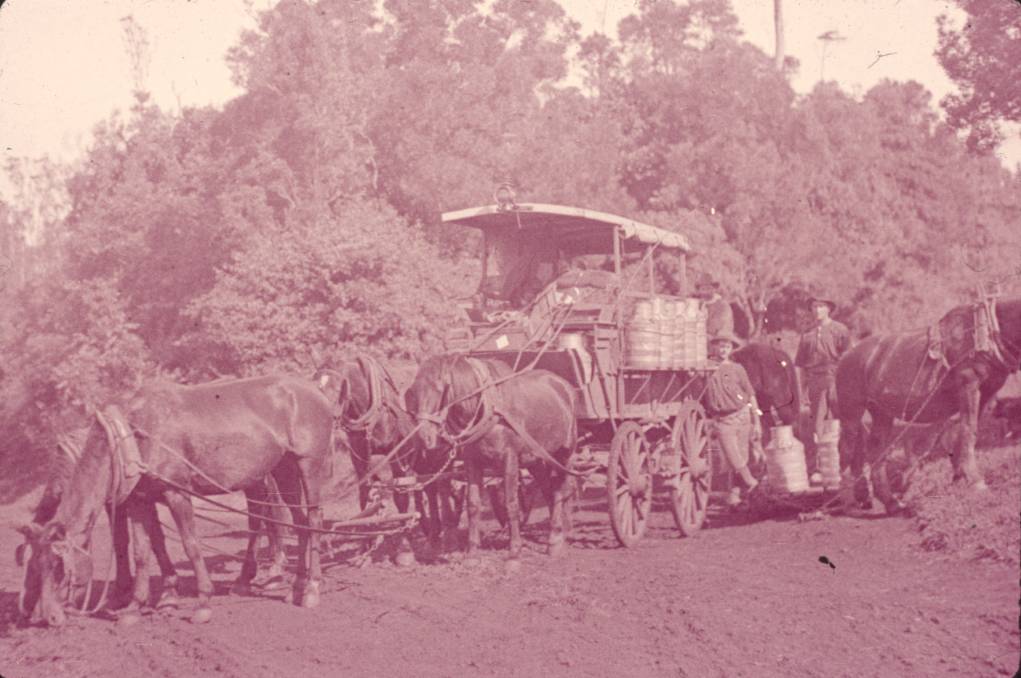 "It's just relentless. There's no end to it. Even on Christmas Day, you have to milk the cows," Sandy said, of dairying.

"But it's rewarding work and the thing I miss most is actually producing something at the end of the day."

The family also felt privileged to run a dairy with Parliament House in sight.

Sandy still runs beef cattle in the Jerrabomberra Wetlands as part of the management of the site. He and Brenda can see the cows from their new home on the Kingston foreshore.

"I can walk around there, have a look at the cows and walk back and get a cappuccino. My life is very civilised now," Sandy said, with a laugh. (And it'd have to be Canberra Milk in that coffee.)

"Yeah, of course we drink milk," Sandy said. "But skim milk these days."

Licensing of the Canberra milk industry was introduced in 1924 and in the 1930s, local dairy farmers banded together to create the Canberra Dairy Society Limited, which gave them greater control of the milk supply in Canberra.

In 1938, a purpose-built milk-treatment depot was opened in Griffith, which remains part of the Capitol Chilled Foods complex. It was serviced by dairy farms at Kambah, Acton and Fyshwick, now long taken over by urban development. The iconic brick factory was built in 1952.

CMAG social history curator Tiaan Zamaglione said by the late 1960s, the Canberra dairy industry faced criticism over quality, pricing, distribution and supply. To combat this, the Milk Authority of the ACT was established in 1971 to alleviate milk distribution problems. Dairy Farmers was appointed the sole processor and Bega the sole wholesale distributor. By the mid-1970s, Canberra Milk was making its way on to shop shelves and into Canberrans' fridges. The authority was disbanded in 2000 as part of the deregulation of the milk industry, letting in competitors offering cheaper milk. But Canberra Milk has remained a staple.

The Capitol Chilled Foods factory in Griffith now processes on average 110,000 litres of milk a day. The raw milk comes from dairies in Bega and Orange. Milk for the A2 milk is trucked in daily from South Australia. The bottled milk is distributed to shops and supermarkets in Canberra and also as far away as Hay in south-western NSW and Pambula on the South Coast.

Capitol Chilled Foods has many long-time employees including lab technician Ratka Martinoska who has been there for 33 years. Her team's most important job is testing the milk at different stages of the processing - when it's raw, when it's semi-finished and when it's ready to go out on the shelf. And it does involves "sensory testing" - tasting, smelling and looking at the milk, as well as examining in the lab.

"This is my second home," Ratka, 54, said. "I spend more time with these guys than my own family. I came out here from Macedonia and told my family I'd save up and come back to visit. I'm still saving!"

Hung Truong, 62, has been a processing officer at Capitol Chilled Foods for just over 40 years, looking after stock control.

"It's always a challenge, you never get it perfect. But it's different every day, which I like," he said. 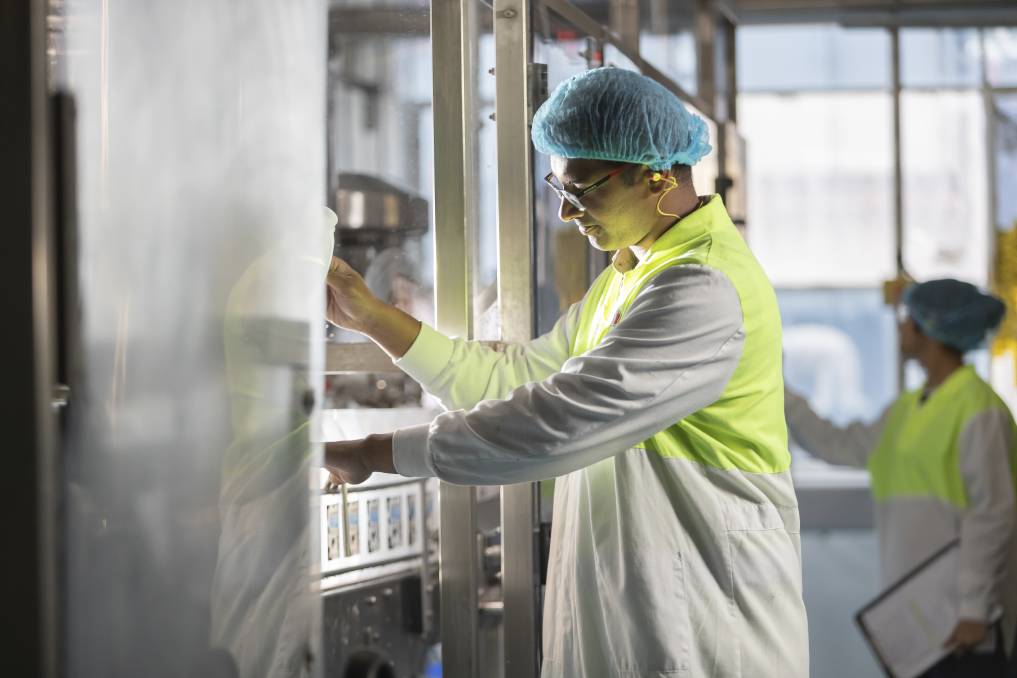 Rebecca Wynne, 43, is this year celebrating two decades with Capitol Chilled Foods, in accounts payable. When asked why she has stayed so long with the company, she's clear. "The people. They keep me coming back."

The staff do get free milk - every Tuesday they are each allocated four litres. And they wouldn't buy anything else anyway, especially not the cheaper milk on supermarket shelves. "You get what you pay for," Hung said.

Canberra's milko brigade, meanwhile, over the years has shrunk from 100 to just two - Michelle Priest who covers Campbell and Reid and Joe Clift who does multiple suburbs on the southside. Joe, 79, has been doing the run for 22 years. Michelle, 51, has been doing hers for 24 years.

They are owner-operators who buy the milk from Capitol Chilled Foods and then sell it to their customers. Michelle said deregulation made it harder for milkos to survive, with new players and more competition from easily accessible cheaper milk. Her run used to be her main source of income but has now become a hobby job and a way of giving part-time work to local teenagers. She still enjoys the community connection.

"I do the local area where my kids grew up and went to school, where I go to church, the local shops and everything so you get to know everybody, so you're like, 'The Local Milko'. It's great," she said.

Joe, who lives in Queanbeyan, plans to retire when he turns 80 in January and sell off part of the business. He uses runners and drivers and has enough customers to make a living. His customers appreciate him, especially when many were isolated during the coronavirus pandemic and he delivered not only milk but eggs, juice and bread.

"I have a great storage of wines and spirits that I get at Christmas time and chocolates and biscuits for the boys, for the runners. So, yeah, my people are appreciative of what we're doing. Let's hope we can continue, hey?" he said.

The story Up the Milk: celebrating 50 years of Canberra Milk first appeared on The Canberra Times.