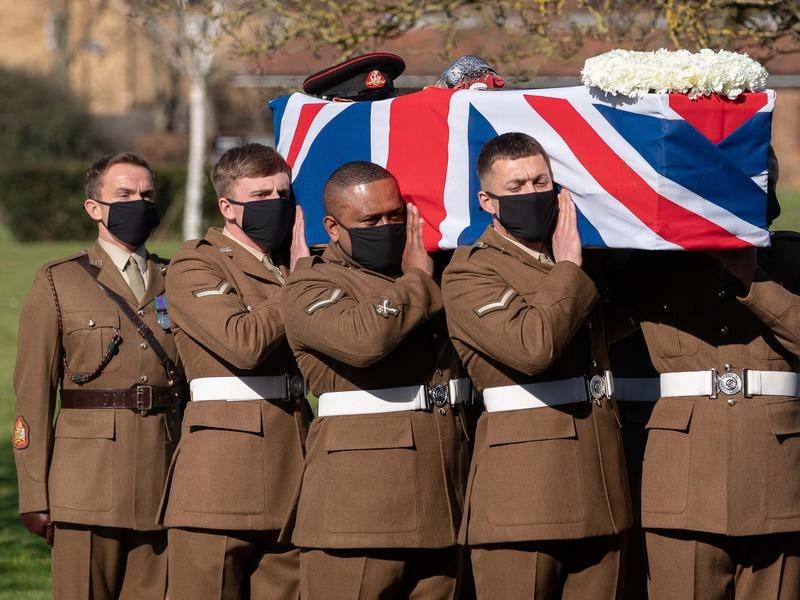 A World War II-era plane has flown over the funeral service of Captain Tom Moore in the UK.

The family of Captain Sir Tom Moore have paid tribute to the war veteran and charity fundraiser at his funeral in the UK, saying his "message and his spirit l...

The family of Captain Sir Tom Moore have paid tribute to the war veteran and charity fundraiser at his funeral in the UK, saying his "message and his spirit lives on".

Sir Tom, who was knighted by the Queen after raising millions of pounds for Britain's health service by walking laps of his yard, died with coronavirus earlier this month aged 100.

His funeral was held at Bedford Crematorium on Saturday, with his coffin carried by soldiers from his Yorkshire Regiment while a World War II-era C-47 Dakota performed a flypast.

The service was attended by eight members of Sir Tom's immediate family, including his two daughters, his four grandchildren and his sons-in-law.

It opened with the charity single Sir Tom recorded with Michael Ball and the NHS Voices of Care Choir, You'll Never Walk Alone, which reached number one in the UK singles charts in April last year.

His daughter Lucy Teixeira paid tribute to Sir Tom, who captured hearts around the world with his fundraising efforts during the first coronavirus lockdown, raising more than PS32 million ($A58 million) for the NHS.

"Daddy, you always told us 'best foot forward' and true to your word that's what you did last year, raising a fortune for the NHS and walking your way into the nation's hearts," she said.

"I am so proud of you, what you achieved your whole life and especially in the last year.

"You may be gone but your message and your spirit lives on."

A bugler sounded The Last Post at the end of the private service.

Members of the public were asked to stay at home and not attend the funeral, but many thousands of people have signed an online book of condolence instead.

In acknowledgement of his fundraising, Sir Tom was knighted by the Queen during a unique open-air ceremony at Windsor Castle.

Sir Tom's 100th birthday celebrations last year included a Spitfire flypast and he was photographed punching the air as it went past.

There are plans to plant trees around the world in his honour, with Ms Teixeira hoping the Trees for Tom initiative will result in a wood in his home county of Yorkshire and the reforestation of part of India, where he served during the war.