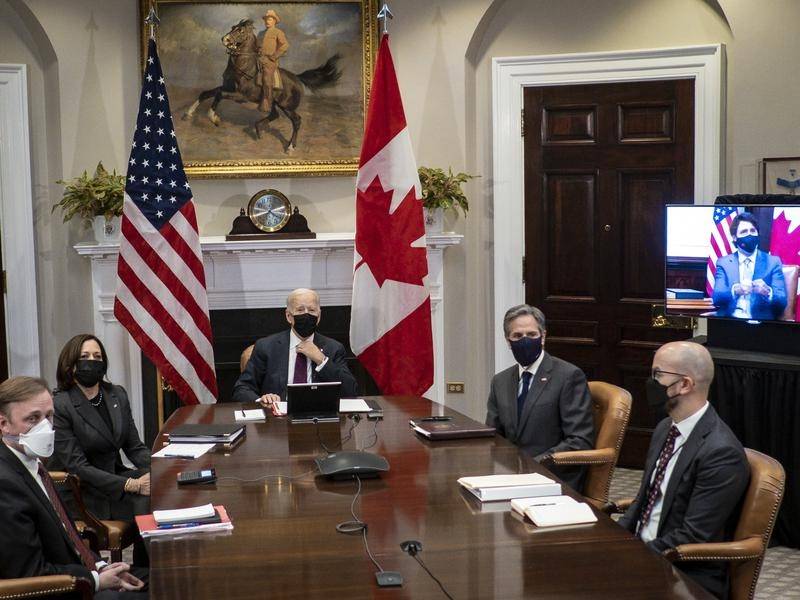 The United States and Canada have held their first bilateral meeting since Joe Biden was elected.

US President Joe Biden and Canadian Prime Minister Justin Trudeau are seeking to turn the page on the Trump era, stressing the countries' deep ties and pledgi...

US President Joe Biden and Canadian Prime Minister Justin Trudeau are seeking to turn the page on the Trump era, stressing the countries' deep ties and pledging to work together on COVID-19 and climate change in their first bilateral meeting.

"The United States has no closer friend, no closer friend than Canada," Biden told Trudeau on Tuesday via an electronic video link with the Canadian leader and top aides.

"That's why you were my first call as president (and) my first bilateral meeting," he said.

"Thank you, again, for stepping up in such a big way on tackling climate change. US leadership has been sorely missed over the past years," the Canadian leader said.

Canada has often been a US president's first foreign stop, but the COVID-19 pandemic turned the sit-down between the two leaders and some of their top deputies into a virtual affair.

Biden, Vice President Kamala Harris and other officials, all wearing dark masks, sat at a long table in a White House meeting room, near a large video screen beaming in Trudeau's image from Ottawa.

It was not clear the meeting would result in any new deal on issues including Canada's access to vaccines produced in the US or a shared standoff with China over the detention of a Huawei executive.

It is expected to yield a shared document outlining cross-government collaboration on a wide range of issues, a senior US administration official told reporters.

But the two leaders made clear they wanted to put the dispute behind them and work together.

Trudeau was the first world leader to congratulate Biden when the Democrat was declared the winner of the November election, illustrating the degree to which the close US ally looks to move on from Trump's four years in office.