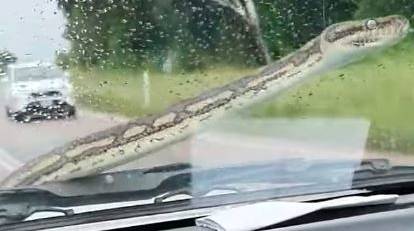 A still from Ms Hudson's video.

Forget about snakes on planes, this is real life - in Queensland.

A North Queensland woman has posted terrifying footage of a large snake appearing on her car's windscreen.

Melissa Hudson of Giru, near Townsville, posted the expletive-laden footage while she and her partner were driving along Queensland's Bruce Highway.

The large python is filmed slithering up the windscreen before getting caught up when the wipers are turned on. It then proceeds to slide up the passenger side window causing Ms Hudson to shriek while her partner shouts at the snake.

Eventually Ms Hudson and the male driver pulled over near roadworks where a worker casually removed the snake from the car with the driver saying "you're game!".

The calm traffic controller is seen attempting to catch the python by the tail before it reportedly slid off the bonnet and across the Bruce Highway to safety.