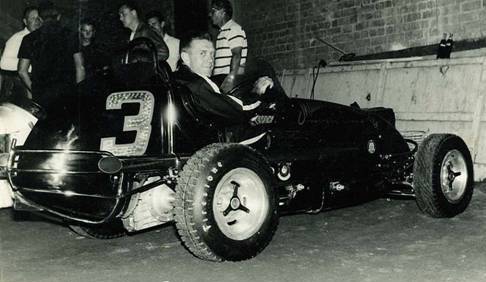 OVAL-TRACK IDOL: The famed Bob Tattersall from Streator, Illinois, in a Mattoon Motors Offy at the Sydney Showground in 1962. He took the car back to US after the visit. He made 13 consecutive annual trips to Australia to race.

Beloved by fans, the powerful, US-built Offenhauser was something special, says author.

IF there is such a thing as love at first, Allan Edworthy lost his heart early to racy a little number that ran with a very fast set.

It was a US-built Offenhauser speedway racing car and he first set eyes on it as a teenager at Sydney Showground in the 1960s.

For Allan, a big part of the attraction was the sound. "These cars' engines didn't cackle: they were deep and full throated," he said.

Decades later, his passion still burns. Allan has now written an affectionate and comprehensive limited-edition book about the Offy titled The Speedway Offenhauser in Australia.

For Allan, 72, the sport is almost a religion.

A commentator, columnist and feature writer, he is well known to speedway fans for his 20-year career as a head announcer, including a 14-year spell behind the microphone at Parramatta City Raceway.

He said the first known speedway cars in Australia appeared in Melbourne in the early 1930s.

"Before that, they really didn't have a name. The Americans called them midgets because they were, if you like, scaled-down Indy cars," he said, referring to the vehicles that raced at the famed Indianapolis circuit.

When Australian and New Zealand saw what the Americans were doing, they set to work copying. 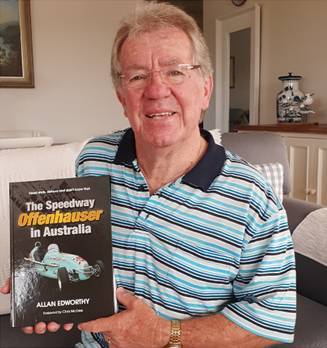 LOVE STORY: Allan Edworthy with his celebration of the Offenhauser. The NSW Mid- North Coast resident has been a fan of the cars since he was a teen.

"The Americans had all the wherewithal and equipment to build some pretty sophisticated racing cars. But Australia was Australia, a long way from the rest of the world, and most of what we built was backyard stuff."

He said Australians pretty much followed the American cars all the way and tried to keep up, making some powerful and fast cars along the way.

Examples include Holdens adapted for racing by the likes of car owners such as Hedley McGee of McGee Cams and Don Mackay. Memorable cars include the Repco Holdens of the 1960s.

The latter were "pretty punchy", Allan said. ""If you had a Repco Holden, whoa-ho-ho, they were a good thing!" Allan said.

"But when the Offenhauser came out, it was far more advanced than anything we had."

Unlike mass-produced street engines put out by major manufactures, the Offy was purpose-built for midget racing. It won many, many events as a result.

The first of the speedsters was brought to these shores in 1939 by American Paul Swedberg, with the first local owner-driver being champion racer and steering specialist Ray Revell. 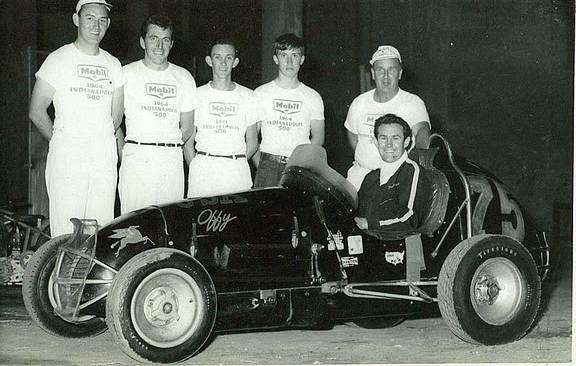 SPEED DEMON: Jeff Freeman in the pits at the Sydney Showground Speedway. A kind larrikin, he was loved by a legion of Sydney fans. Sadly, he was killed in the same car at Westmead Speedway on Mother's Day, 1965, a year or so after this photo was taken.

But the ball really began rolling in 1958 when US champion Bob Tattersall imported an Offy on what would become the first of 13 yearly visits to Australia.

"He was the man. He was a brilliant driver - fast but safe. Once he came out, people said 'what will we do know?'

"I didn't think he ever got upside down in Australia."

Many did - often with tragic results. Allan says about 100 of the people mentioned in his book didn't survive. At the Sydney Showground alone, crashes took the lives of 27 drivers across all three racing divisions.

Most of the cars Tattersall brought from the US were for sale or already bought.

Allan said it typically might have been an older car that its owner wanted sold. Or Tattersall might be under instructions to race it then bring it home in one piece so it could be put on the track again.

But then he started to choose more sophisticated later-model versions, and they took fans' breath away.

Allan said the 1960s was the golden era of speedway racing, especially at the two main homes of the Offies, the Showground and the Ecka in Brisbane.

"All the major cities had big speedways but none was more glorious than the Showground, with that magnificent clocktower. It was an arena - it really was.

"You couldn't fit more people in a lot of the time. Nearly every Saturday night during the summer it was packed.

"You might get up to 24 cars in a feature race with a couple of Americans tacked on, but the mean number was about 20."

Sensational speeds were reached. Races were generally measured by lap time, but Allan recalls "Lanky Lew" Marshall clocking 110 mph in an Offenhauser on the back stretch of the old winter track at Westmead.

Now the site of Westmead Hospital, it hosted Sunday meetings in daylight. A half-mile track by then, it was, "nice and wide and very fast", Allan said.

Of his personal mecca, the Showground, he said: "The track was much narrower than most - you could call it infamous - and a real challenge. If you got three cars wide, you were on your toes because they're all running sideways."

Many things have changed since the '60s. Today the sport is much safer than the days when some drivers raced in sandshoes, T-shirts and shorts.

"Let's face it, a lot of people back then were there to see the accidents and when they happened they were spectacular - but not very nice.

Today, as in all motorsport, fireproof suits, roll cages, five-point seatbelts, gloves, full-faced helmets and other protective measures are mandatory.

The Speedway Offenhauser in Australia, Allan Edworthy ($85 + postage). To obtain a copy, send an email to orders@speedwayoffenhauseraustralia.com