Marj Thornton (nee Pullen) left with her friend Joy as special wireless operators at Kedleston Hall in the early 1940s.

Marj Thornton talks about her top-secret mission as a wireless operator helping codebreakers in Britain during World War II.

When it comes to solving puzzles and unearthing clues at her nursing home's weekly quiz, nonagenarian Marj Thornton is a natural.

And so she should be. The British-born 98-year-old who now lives at Resthaven Port Elliot was one of the women who played a vital role in cracking the famous Enigma code during World War II.

Then known as Marjorie Pullen, she was one of thousands employed at Y (wireless intercept) stations, whose job is was to harvest raw material for the Bletchley Park codebreakers, listening into enemy radio transmissions and recording their content.

Bletchley Park, a country house in Milton Keynes, Buckinghamshire, was once the top-secret home of the World War II codebreakers and was the birthplace of modern computing. It is where mathemetician Alan Turing with fellow codebreaker Gordon Welchman invented the Bombe machine - crucial to cracking German communications encoded by the Enigma machine.

Born in Birmingham in 1921, Marj was conscripted when she was 20. "You had three choices: munitions factory, land army, or services," she said.

"I chose to go in the army, which was a tremendous culture shock. There was no privacy - we slept in large barracks with girls from every walk of life. I'd never before heard really offensive language (I'd never heard my father swear), or seen young ladies blind drunk. Luckily, they were not all like that, and I found a couple like myself." 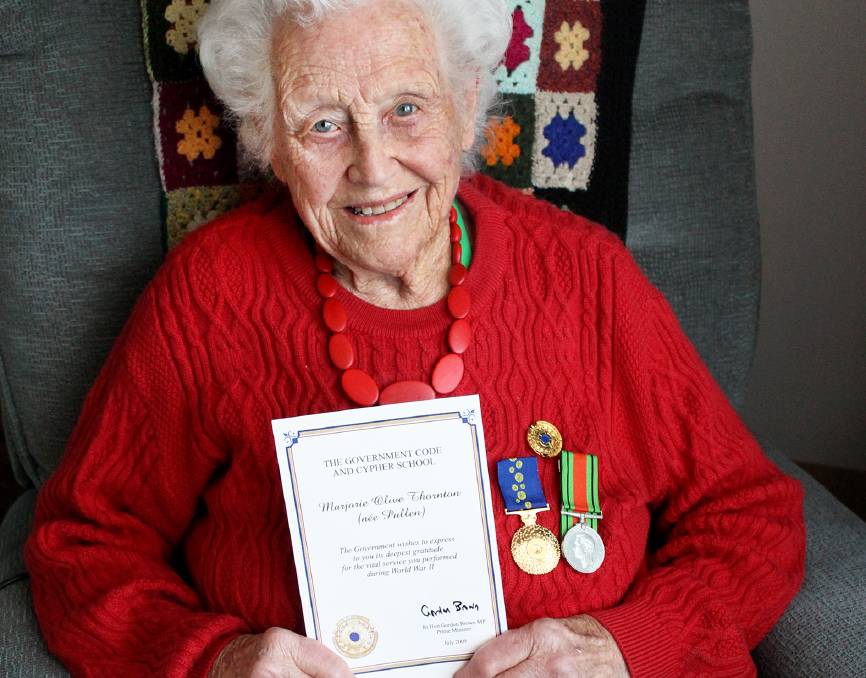 Marj Thornton, 98, with a certificate of thanks for her services during World War II.

At the end of the month, Marj was asked to be a wireless operator (wop), and "thought that sounded different" so agreed.

She was posted to Trowbridge on Salisbury Plain, and was one of the first girls to do the wireless training course. "The first thing I had to learn was dots and dashes, then earphones," she said.

"I had to learn to take down Morse code at 25 words per minute, and learn numbers, punctuation marks, and international Q code, which was used by all signallers in every country to talk to each other."

From Trowbridge, Marj was sent to an old country house, Shenley, in Hertfordshire, where the group were introduced to the Superhets wireless sets, given a frequency to cover, and told to take down everything they heard.

"This is where we learned what we were actually going to do, which was intercept messages from the German army under the Official Secrets Act."

Just after Christmas 1942, Marj and her friend, Joy, were sent to Kedleston Hall in Derbyshire. "We lived in Nissen Huts with 12 girls in a hut, working in six hour shifts. They would have a 15 minute coffee break halfway through, then 36 hours off. Talk about jet lag!"

Encrypted radio transmissions caught at Kedleston were then sent to Bletchley Park for decryption.

"The personnel at Bletchley Park were housed in different huts. For example, Hut 6 might receive initial messages to decipher. If they succeeded, the message was passed on to Hut 3, where it was translated. They then decided on the urgency of the message, and whether liaison with the War Office or Winston Churchill was necessary.

At the time, we had no idea of what really went on at Bletchley Park, as the only information anyone working on Enigma was told was what they needed to know.

She said in the very early days, deciphering had to be done manually.

"It involved miles of punched tape, which had to be matched up - a process similar to a huge slide rule. This was a long and painstaking business, and traffic had to be deciphered as quickly as possible or it would be out of date.

"Then they came up with a machine called the Bombe, which was eight foot tall and seven foot wide. Bombes unravelled wheel settings for enigma ciphers.

"The front were rows of coloured circular drums five inches in diameter, with the letters of the alphabet painted on the outside of each drum. The back of the machine was a mass of dangling plugs on rows of letters and numbers.

"Use of Bombes meant that messages were deciphered in a much shorter time. There were several locations for these Bombes in small villages in area, with ten or more in each room. Imagine the noise!

"However, more sophisticated, high speed machinery was needed. Colossus 1 was rolled out at the end of 1943, and Colossus Mark 2 was brought into commission on 2 June 1944."

"'By 1945, Britain kept ten Colossi busy, decrypting 1,200 messages a month. By the end of the war, they had decrypted 63 million characters of messages sent between Hitler and his generals.

"After the war, equipment was either spirited away by security services, or destroyed on orders of Churchill. The importance of Colossus was only realised in 1996, following publication of secret documents by the US. As a result, authorities grudgingly allowed a Colossus to be rebuilt at Bletchley Museum.

"As far as the rest of my army experience was concerned, I spent two years at Kedleston Hall, which included some exciting times around D Day when traffic was extremely heavy. Then, some of us were posted to Harrogate. Whilst there, my husband-to-be, Ed, came back to the UK, so I was allowed 48 hours leave just after Christmas 1944."

The couple married in March 1945 and they eventually moved to Australia where Marj was an active member of the community, including with Probus, Red Cross and Meals on Wheels.

In 2016, Marj was awarded the medal of the Order of Australia for her service to the community and the church.

Starting out as a volunteer at Resthaven Port Elliot, Marj came for a respite stay in February 2020, before moving in at the end of May .Here she enjoys many of the activities on offer.

"I like the quiz, and the carpet bowls, the bocce, anything that's going, really," she said.