'Selection' of Jews on the ramp at Auschwitz-II-Birkenau in German-occupied Poland, May/June 1944, during the final phase of the Holocaust.

Australian Jewish refugee Symcha Gausman thought his wife and children were safe where he left them in Poland. The 26-year-old arrived in Australia in 1939, hoping to establish himself with a job and a home before sending for his family to join him.

In 1943, he managed to send them a food parcel with the help of a Jewish humanitarian agency from Portugal. But by that time, his young family had already been murdered by Nazis in Auschwitz. His children were four and six years old.

"The year before, the community had been liquidated and sent to Auschwitz," said Holocaust expert and University of NSW lecturer Jan Lanicek. "And if a young woman with two children arrived in Auschwitz, we know there was no chance of survival."

This heartbreaking story is one of many Dr Lanicek will be unearthing from the State Library of NSW archives to piece together a strand of Australian history rarely revisited until now.

"It's very easy today, with different databases, to find out about the fate of people at that time," said Dr Lanicek. He is collating these stories with colleague Ruth Balint to ensure newer generations have access to first-hand experiences of the Holocaust as survivors pass away.

"We rely on survivors to tell their stories," Dr Lanicek says. "In this way, we make the connection between ourselves and the Holocaust. But in a few years, even now, it will be very difficult to get them to talk to students and other audiences." 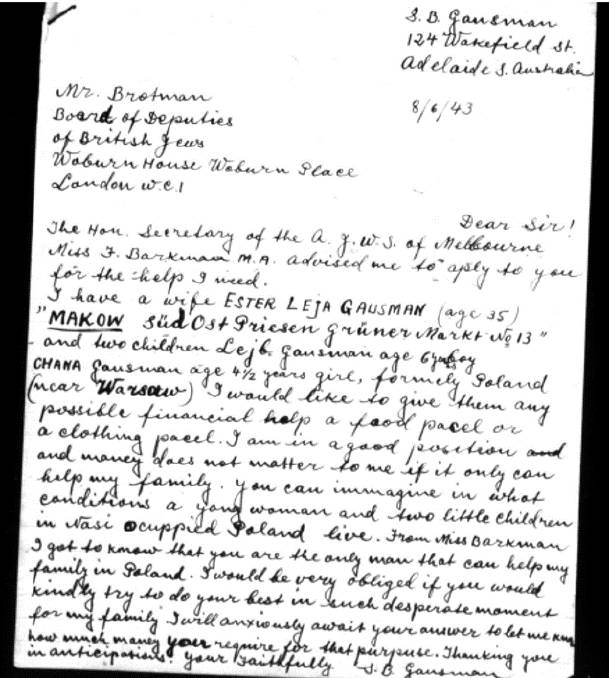 A letter written from Symcha Gausman in Adelaide in 1943 to the Board of Deputies of British Jews asking for help for his family in Poland.

So, he says, we need to find new ways of connecting people to the Holocaust, "especially in Australia which is so far from Europe".

He says many migrants in Australia can identify with the stories of Jewish refugees who arrived here before their families were expected to join them.

Dr Lanicek says men often migrated first because the Nazi regime posed a greater threat to them in 1930s Germany. It was the strategy for the man to get settled with a job, a house and then his family would follow.

But in World War II, "very often the man managed to emigrate, then war broke out and his wife, children and parents remained in Germany or in Poland ... So, the man [may have] lived in Sydney, Adelaide or Melbourne, with his wife and small children in Nazi-occupied Europe, and he reads the news, so he knows what's happening there.

"He's no [financially] better off in Australia but he still tries to contact humanitarian agencies and sacrifices all his money to pay for parcels to be sent because he feels so powerless but still feels like he has to do something," he says.

"He knows they're put into a ghetto. And he has postal communication - up to 30 words [at a time] via the Red Cross. But then silence comes. And he doesn't know what is happening [to his family]."

Dr Lanicek has uncovered many accounts of feelings of desperation and powerlessness as men lost communication with their loved ones, and migration between Germany and Australia became practically impossible.

"We read it in the letters: 'I don't know what to do. I know it's unlikely the parcels will get there, but I feel I have to do something otherwise I can't live like this anymore'," Dr Lanicek says.

An expert in Holocaust studies originally from the Czech Republic, Dr Lanicek says he had little idea about Australia's connections to the Holocaust before arriving in Sydney eight years ago.

He says the only time Australia is mentioned with any significance in historical studies on the Holocaust is when the Australian politician Sir Thomas Walter White spoke at the July 1938 conference in Évian, France. 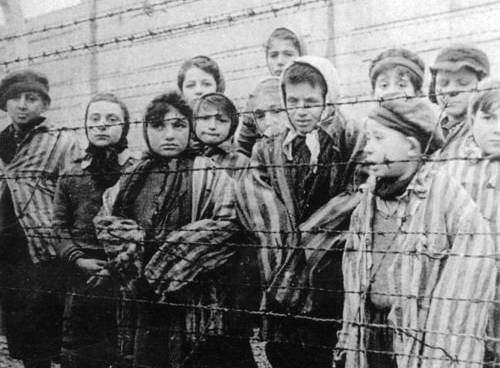 Child survivors of the Holocaust filmed days after the liberation of Auschwitz concentration camp by the Red Army, January, 1945. Photo: USHMM/State Archives of the Russian Federation

The 32 nations, including the UK, France, US, Australia and New Zealand, had gathered to discuss opening their borders for Jewish refugees fleeing persecution from Nazi Germany.

Australia's delegate, Sir White infamously declared, "as we have no real racial problem, we are not desirous of importing one by encouraging any scheme of large-scale foreign migration", capping Australia's annual refugee quota at 5000.