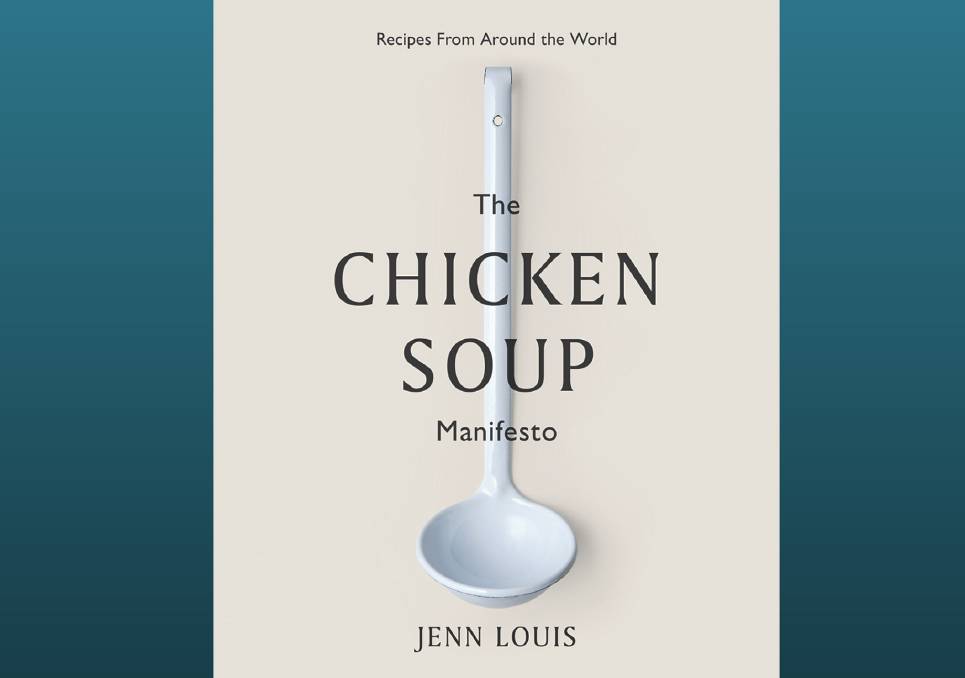 American chef Jenn Louis's new cookbook The Chicken Soup Manifesto is a celebration of beloved chicken soup dishes from around the world.

For most people (vegetarians excepted) a bowl of chicken soup is a warm. comforting, memory-filled experience of yummy goodness.

And it doesn't seem to matter where in the world you hale from, the humble chook gets transformed into a dish of deliciousness when combined with a good stock, vegetables, spices, herbs, cream, rice, noodles and of course love.

American chef Jenn Louis's new cookbook The Chicken Soup Manifesto is a celebration of beloved chicken soup dishes from around the world.

In more than 130 recipes Jenn shows how chicken soup is a source of heart-warming sustenance and a culinary connection which allows us to express our cultures while feeding our families and friends.

Whether rich, hearty and chunky, or light, fragrant and brothy, looking at the world through the lens of a simple bowl of chicken soup reveals volumes about a society and its people, the ingredients within their reach, the techniques that mark their style of cooking, and, often, a folkloric or family history.

Jenn writes: "Chicken is the animal protein that almost all cultures have in common. Chicken grows quickly, and in much of the world, the birds wander around the perimeter of the home and are raised domestically for food. Chicken is accessible, affordable and neutrally flavoured, lending itself to countless flavour pairings."

The Chicken Soup Manifesto takes readers on a soup-inspired journey across the globe from Algeria to Colombia, Thailand to Spain, Romania to West Africa, Scotland to Sri Lanka, Iraq to Italy....and more.

The book is organised geographically with tips for troubleshooting, the best tools to use and pantry essentials.

Every recipe is accompanied by beautiful photography guaranteed to make you want to experiment with world flavours you may not have encountered in the past.

The Chicken Soup Manifesto is sure to delight cooks of all levels of experience and is worthy of a place on the cookbook shelf.

Jenn Louis has enjoyed a culinary career spanning more than two decades. She grew up believing that a creative path was in her future and found her calling early in the kitchen. She has owned several highly acclaimed Portland restaurants as well as a wildly successful full-service catering company. Jenn has competed on Bravo's Top Chef Masters, was named one of Food & Wine's Best New Chefs in 2012, and her simple, sophisticated cooking style, championing seasonal Pacific Northwest US ingredients, has earned her two nominations for the James Beard Foundation Award of Best Chef: Northwest. Her debut cookbook, Pasta By Hand, published in 2015, was nominated for an IACP from the International Association of Culinary Professionals. Her second book, The Book Of Greens, won an IACP award in 2017. The book was also nominated for a James Beard Award. Jenn is involved with nonprofits including Alex's Lemonade Stand Foundation and Portland Homeless Family Shelter. She lives in Portland, Oregon with her three cats, Wasco, Silverado Silverstein and Tov, and loves to garden, read, and cook for her neighbours. Especially chicken soup!

Recipes from The Chicken Soup Manifesto 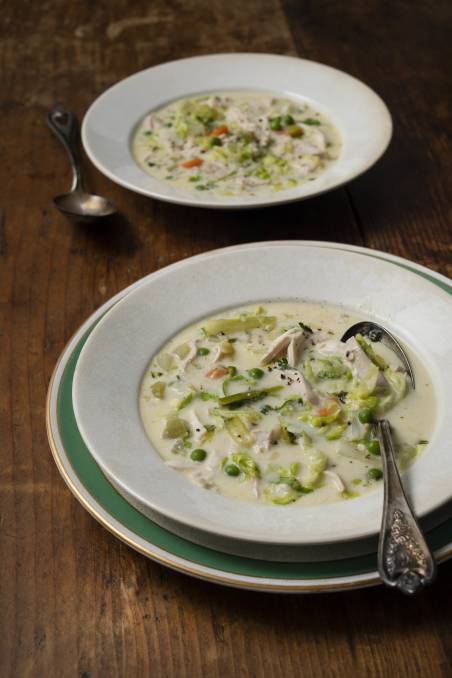 Cullen is a small town in Moray on the north-east coast of Scotland, known for its smoked haddock skink. The term skink, another word for broth, is an old Irish term that evolved to refer to other broths, such as chicken - hence, chicken soup came to be referred to as chicken skink. This lovely soup is sweet from the leeks and carrots, and evokes springtime with its peas and lettuce. The cream and egg yolks bind the broth, making it an elegant and substantial soup. Serve with crusty bread to dip into the skink.

Place the chicken and water or stock in a large pot with the salt. Weigh down the chicken under a few small plates to keep it submerged and simmer gently over a medium heat until the chicken pieces are cooked through, about 7-10 minutes for the breasts and 15-18 minutes for the legs and thighs. The meat should separate from the end of the leg bone when cooked, a thermometer will read 74°C (165°F) when inserted into the thickest part of the thigh or breast and the juices of the chicken will run clear.

When the chicken is cooked, remove from the pot and leave until cool enough to handle, then remove the chicken skin and discard. Using your hands, shred all the meat and discard the bones. Set the meat aside and reserve the broth.

Wipe out the pot, then add the butter and melt over a medium heat. Add the celery, carrots, leeks, bay leaves, thyme and spring onions and cook slowly, stirring for 3-4 minutes until the vegetables are soft. Add the reserved broth, the peas and the chicken meat and bring to a gentle simmer.

Combine the egg yolks and cream in a small bowl. Add a few tablespoons of warm broth to the cream, stir and add more, a little at a time. Make sure not to cook the eggs. Reduce the heat to very low and drizzle the egg mixture into the soup, stirring constantly. Keep the heat low, otherwise the broth will separate. Season with salt and freshly ground black pepper and stir in the shredded lettuce. 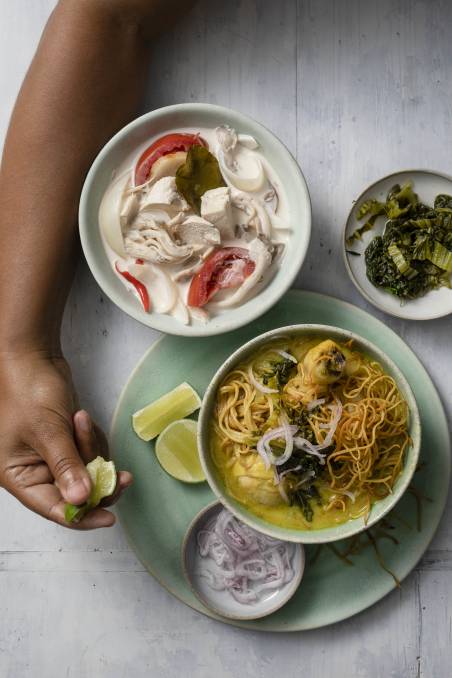 Tom kha gai is one of Thailand's most popular soups. The name directly translates to chicken galangal soup, galangal being the brightly flavoured rhizome, similar to ginger, that flavors it. The best tom kha gai is cooked gently, allowing the perfume-like flavors to develop and the chicken to remain tender. Traditionally, this soup is served with steamed jasmine rice.

5 cm (2 in) piece galangal or ginger, peeled and cut into very thin rounds

2 roma or plum tomatoes, cut into 8 wedges each

5 Thai (bird's eye) chilies, cut from end/tip to stem but not in half

Place the lemongrass in a pot with the galangal, lime leaves and coconut milk and place over a medium heat. Stir well to incorporate, then only stir gently in one direction so as not to agitate the broth too much. The key is not to boil the coconut milk or it may curdle. Keep the heat low enough to barely hit a simmer the entire time the soup is cooking.

Add the onion, tomatoes, chilies, mushrooms, chicken and fish sauce and stir very gently to incorporate. Cook slowly for 5-7 minutes until the chicken is cooked through and the mushrooms and onions are tender. Add lime juice and cilantro and season with salt and serve.

This is an edited extract from The Chicken Soup Manifesto by Jenn Louis, published by Hardie Grant Books www.hardiegrant.com/au/books, RRP $45 and is available in stores nationally. Photographer: Ed Anderson