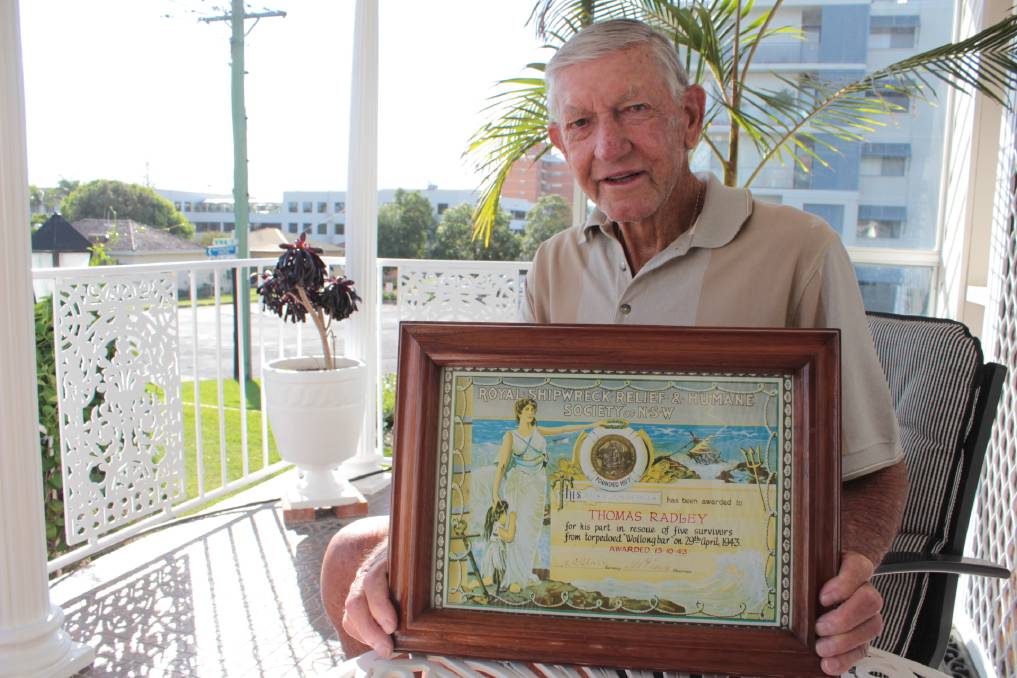 BATTLED HEAVY SEAS: Cec Radley with the bravery award presented to his father Thomas, one of six crewmen aboard the trawler XLCR recognised for rescuing the survivors from SS Wollongbar II.

As Wollongbar II is found, Cec Radley recalls his family's bravery the day it was lost.

It was wartime and Cec Radley was 11 when the police knocked on the door of the family home in Port Macquarie late one morning when the seas were rough.

For as long as there have been wives and mothers of fishermen, it's the knock they have always feared.

But on April 29, 1943, it was not Mrs Radley who would suffer a terrible family loss.

The police came to tell her that a ship was in trouble and that her husband and three oldest sons - who had just returned to shore because of bad weather - had gone back out to help.

The stricken vessel was the coastal freighter SS Wollongbar II, which had been torpedoed by a Japanese sub off Crescent Head. Split it half, it sank in minutes. 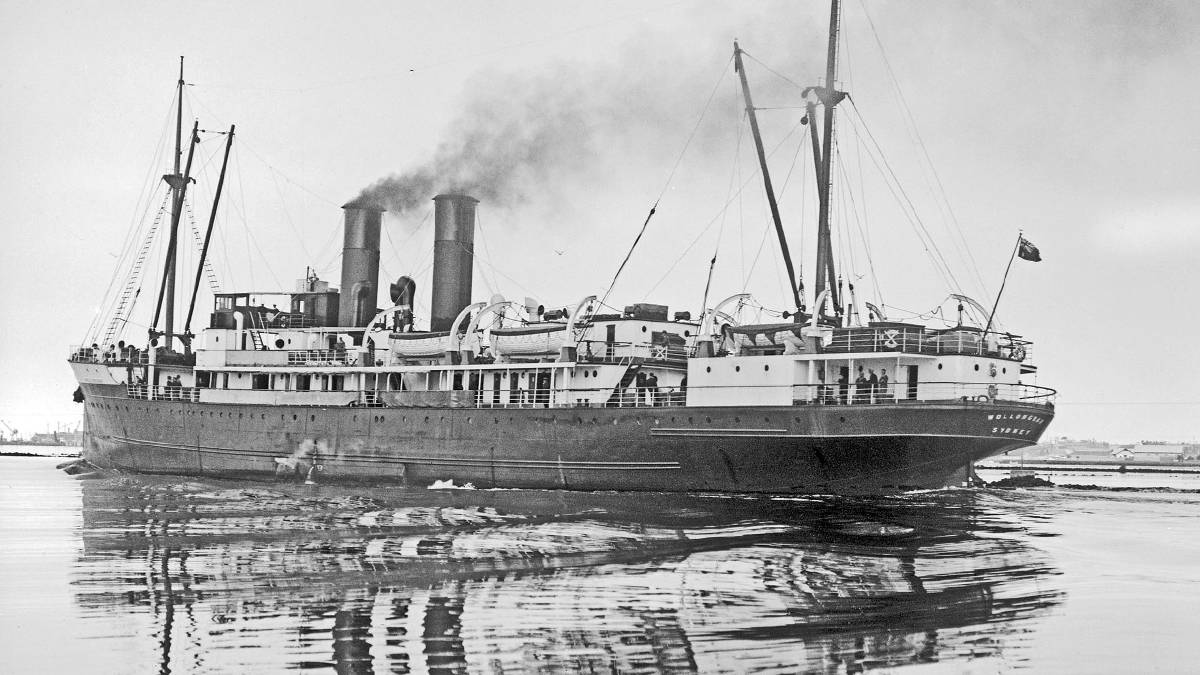 SUNK IN MINUTES: The SS Wollongbar II was carrying a cargo including thousands of pounds of butter when it was attacked.

Of the 37 men on board, only five survived.

This week the memories came back for Cec, 88, as it was announced that the wreck of the Wollongbar had been discovered off Crescent Head.

Cec said his dad, Thomas, told him in later years that he was conscious the enemy might still be around after the attack.

"XLCR was only a 50-foot vessel. And they knew the Japanese submarines were out there, because Dad had sighted them," he told The Senior.

This part of the coast was a favourite haunt of the enemy raiders, he said.

"Crowdy Bay goes way back in and it's quite a safe bay in certain weathers.

"There were six of them operating along the eastern seaboard and they'd go in there to charge their batteries of a night time." 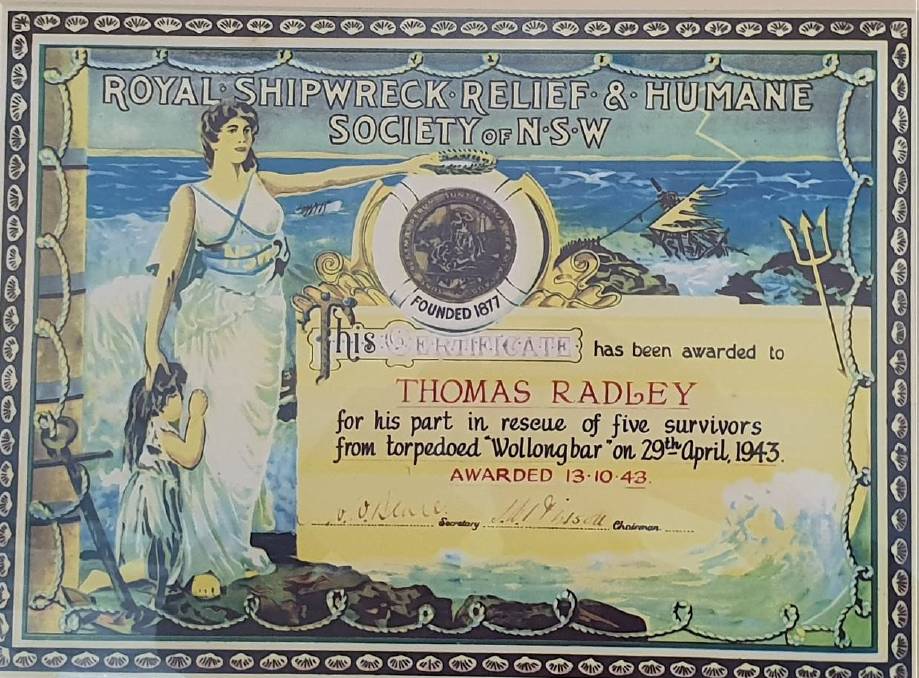 BATTLED HEAVY SEAS: Thomas Radley - Cec's father - was one of six crew aboard the XLCR recognised for their courage.

He said his father saw submarine in Plomer Bay, between Port Macquarie and Crescent Head, while out looking for bait fish.

"It was early one morning and Dad said that in the semi-darkness they saw a sub going under."

"He was concerned but he always said the Japanese subs were there trying to hide.

"They didn't want to draw attention or waste a torpedo on a little fishing boat like his. They had bigger fish to chase."

Such as the Wollongbar. The coastal freighter took two torpedoes and was blown in half, debris and cargo flung all around.

Amazingly, a Catalina flying south saw the submarine, but tragically, "couldn't do a damned thing about it", Cec said.

"That's how the notification went out. They notified headquarters and said they had just witnessed a sinking.

"The pilot said if he had a hand grenade he could have thrown it down the conning tower, that's how low they were.

"He could have landed on the water to rescue the men but he couldn't get back up again because the sea conditions wouldn't allow that."

Instead, told to stand by, the Catalina "flew around outside the harbour here in Port and more or less directed my father and crew to the site of the attack".

There they found the five survivors rowing towards shore in a semi-submerged lifeboat, two on an attached raft made of a couple of 44-gallon drums. 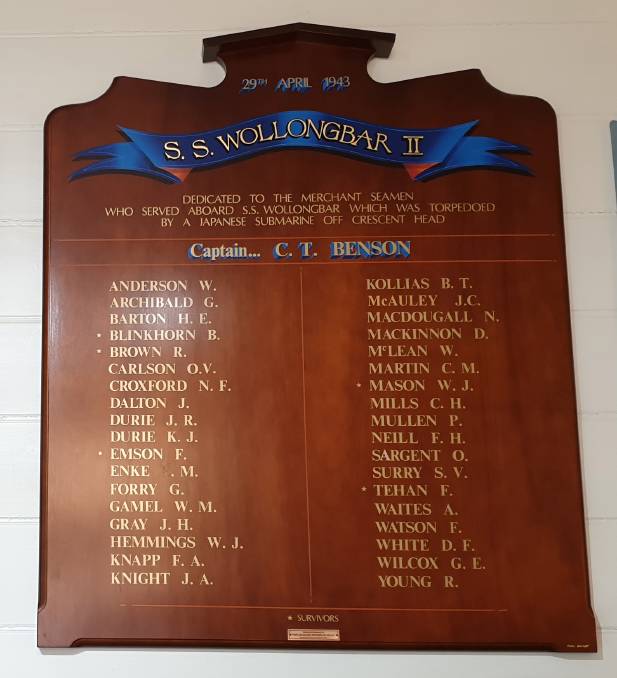 SO MANY LOST: A memorial board with the names of those aboard Wollongbar II when it was hit by two Japanese torpedoes. Asterisks mark the five survivors.

One man had suffered burns to 80 per cent of his body. Cec said he was evidently scalded by a damaged steam pipe as he clambered to escape.

"The lifeboat had a jury sail up but it also had a big hole in it. It was still afloat but had a lot of water in it."

According to one account, "The trawler crew had the kettle on and soon made the survivors a cup of tea. The crew even took off some of their own dry clothes to warm and comfort the wet shivering survivors."

For their efforts each member XLCR's crew that day was awarded a bravery certificate by the Royal Shipwreck Relief and Humane Society of NSW.

When it sank, the Wollongbar was carrying 15,000 46-pound blocks of butter, a cargo of bacon and other rationed items.

Most of it came ashore at a beach in Port Macquarie, Cec said.

"My dad went to sea the next day and picked up 200 boxes. He handed a lot of that in and got paid salvage for it, which wasn't very much.

"But he kept a lot. So we had plenty of cakes."

KNEW WHERE TO LOOK

Cec, who followed the family tradition and became a fisherman on leaving school, took the discovery of the Wollongbar in his stride.

He said always had a pretty clear idea of the wreck's location and was confident his brothers could find their way back there again.

"We didn't have the equipment like you have today but I'm sure they took their marks when they went out. 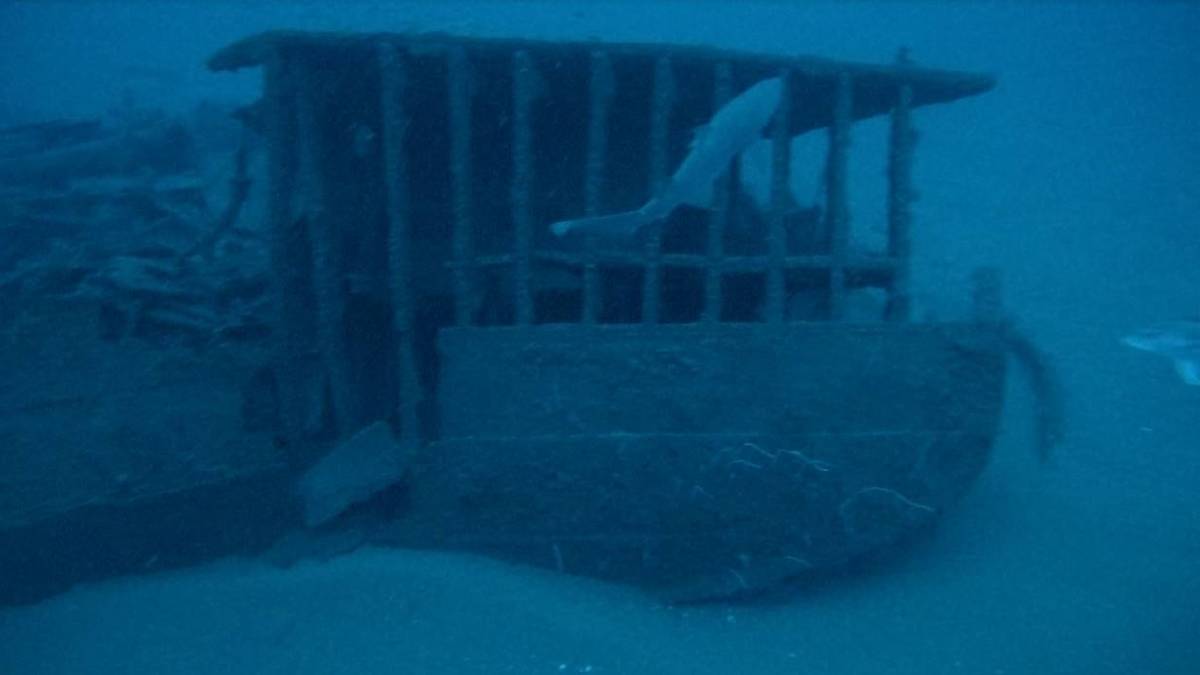 WATERY GRAVE: A still from video footage taken of the sunken vessel.

"That's how we found our traps. You have three marks - one straight in shore, one north and one south. Once they all come together it's pretty easy.

The Radleys' knowledge of the local waters came from years of experience.

Cec said his father was the first fisherman operating commercially out of Port Macquarie.

"In the early days there was a bar here," Cec said. "Nowadays it's quite calm; they've improved it and you can get in and out easy.

"That's why my dad came here - there was no one else fishing here. The bar kept people away. We worked around those conditions."

At one time the Radley brothers operated three vessels out of Port Macquarie, "chasing prawns all up and down the seaboard".

But when his brothers decided to retire, he did, too, with no regrets. "It was long hours and hard work."

Sold in 1962, the trawler the family called "X" went south for many years before being brought back to Port Macquarie by maritime enthusiasts.

In 2004, it was given to Newman Senior Technical College, which turned it into a floating classroom for marine studies.

Refitted completely by students - changes included a bigger wheelhouse to allow for chartwork instruction, a new deck and full recaulking - XLCR was relaunched in 2009. 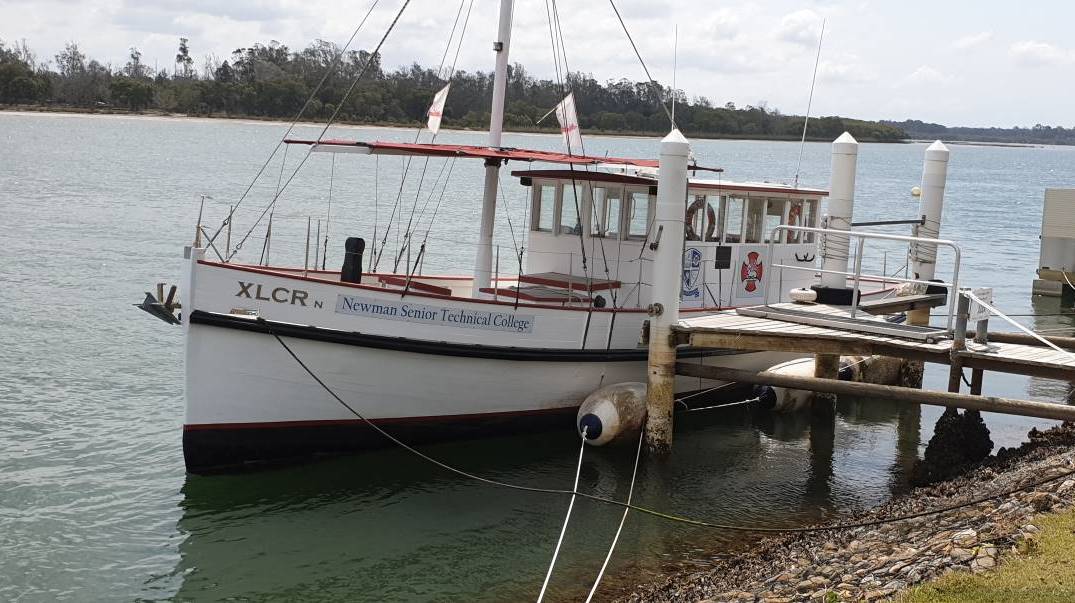 STILL IN SERVICE: Today the XLCR is a floating classroom for maritime studies students in Port Macquarie,

Cec said at the ceremony that his father and brothers would not recognise it - though the hull shape remains the same.

But he's as pleased as Punch. And proud that it is still serving today.