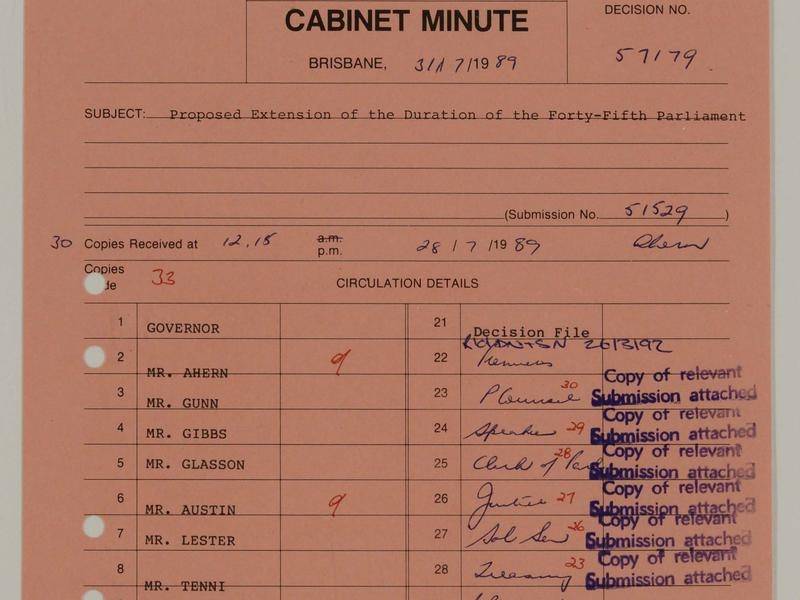 With their 32-year reign over Queensland facing a collapse in 1989, the state's National Party devised a scheme to delay an upcoming election. Support for the...

With their 32-year reign over Queensland facing a collapse in 1989, the state's National Party devised a scheme to delay an upcoming election.

Support for the party was fading after the Fitzgerald Inquiry found systematic corruption in the state's police force and government just two years earlier.

Despite the fallout, the National Party hoped to use a recommendation from the inquiry to keep them in power for at least six more months, according to freshly released cabinet documents.

Then-premier Mike Ahern suggested the government use the commission to extend the parliamentary term.

While he addressed his cabinet in July 1989, Mr Ahern said his term could be extended by immediately implementing the new commission.

Mr Ahern said the commission could conduct an immediate review of the electorate boundaries which would force the election to be postponed.

Another option was to hold a referendum in late 1989 on whether to have the next general election using the current boundaries, also forcing the delay of the election.

"The forty-fifth parliament continues to 8th January, 1990, and no longer," Mr Ahern told his colleagues.

"It is therefore proposed to extend the duration of the forty-fifth parliament to 8th July, 1990."

Cabinet minutes released on New Year's Day reveal the two bills which were mooted by the government.

Changes to the Referendum Act were then considered by the government in late August, but ultimately it was decided to not go ahead with the plan.

The plans were altogether dropped in September and the general election was held on December 2, 1989.

The Labor Party led by Wayne Goss went on to a convincing win over the National Party.