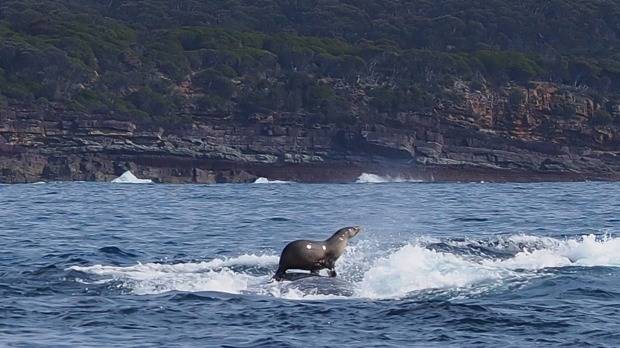 The seal that hitched a ride on a whale went viral world wide when it was captured four years ago. Photo: Robyn Malcolm

Even four years later, a spectacular image of a seal riding a whale near Eden continues to raise eyebrows.

Even four years later, a spectacular image of a seal riding a whale near Eden continues to raise eyebrows.

Eden photographer Robyn Malcolm's photo of a seal riding a whale has gone viral world-wide for a second time round.

The photo, captured by Ms Malcolm while on a whale watching cruise off Eden, had its first taste of fame when it waspublished four years ago, in September 2015.

The photo started doing the rounds again after it grabbed the attention of underwater performance artist and ocean activist Hannah Mermaid.

After being posted on the activist's Facebook page at the weekend - she has 126,000 followers - the photo and story went gangbusters, with more than 5800 shares just from Hannah's page.

When Australian Community Media spoke to Ms Malcolm back in 2015, she said she could safely brush off any suggestion the photo of the whale-surfing seal had been doctored, for one simple reason.

"I'm positive, because I don't know how to use PhotoShop."