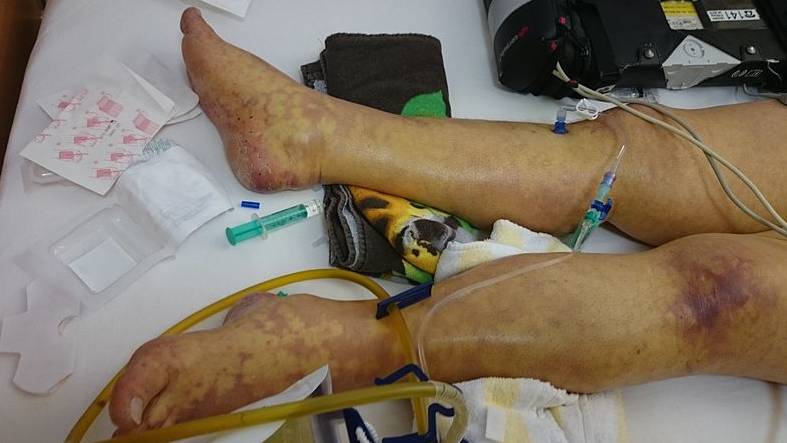 Older Australians are among at-risk groups for sepsis.

Australian experts say a national plan is needed to reduce death and disability from sepsis.

AROUND 18,000 Australians are treated in hospital, many in intensive care, each year suffering from life-threatening sepsi. At least 5000 die, yet few people have heard of the condition.

According to the authors of a perspective published by the Medical Journal of Australia, there is no national action plan to co-ordinate public awareness campaigns and treatment of sepsis, which is caused by the body's response to infection.

The infection causes the immune system to release chemicals into the blood to fight the infection but these can also result in organ damage. Sepsis can lead to septic shock and death.

Professor Simon Finfer from The George Institute for Global Health at the University of NSW, said deaths from the condition "disproportionately affect the very young, the very old, and Aboriginal and Torres Strait Islander people".

The perspective authors have called for a co-ordinated national approach to "reduce preventable deaths and disability from sepsis".

A recent survey by the Australian Sepsis Network and The George Institute for Global Health reported that only 40 per cent of Australians have heard of sepsis and only 14 per cent know any of its signs," wrote Professor Finfer and colleagues.

"Lack of awareness results in delayed presentation to health care providers and because early bundled intervention (particularly, prompt antibiotic treatment) remains the most effective treatment, such delays increase the risk of preventable deaths and disability.

"Sepsis is a time-critical medical emergency."

NSW has a Sepsis Kills program for medical personnel which promotes recognition of sepsis and intervention within 60 minutes - including taking blood cultures, measuring serum lactate levels, administration of intravenous antibiotics, and fluid resuscitation.

Queensland has developed the Sepsis Breakthrough Collaborative, and Safer Care Victoria has initiated the Think Sepsis: Act Fast scaling collaboration on the back of the NSW success.

"While these state-based initiatives to audit and improve in-hospital recognition and treatment of sepsis are welcome, a co-ordinated national approach that addresses pre-hospital and in-hospital recognition and treatment, and the significant and neglected post-discharge needs of sepsis survivors, is likely to reap greater benefits at a lesser cost," Professor Finfer and colleagues wrote.

The Australian Sepsis Network says sepsis is treatable if caught early. It can occur as the result of any infection, so it is important to be aware of sepsis symptoms and seek urgent medical help if you or someone you care for has: