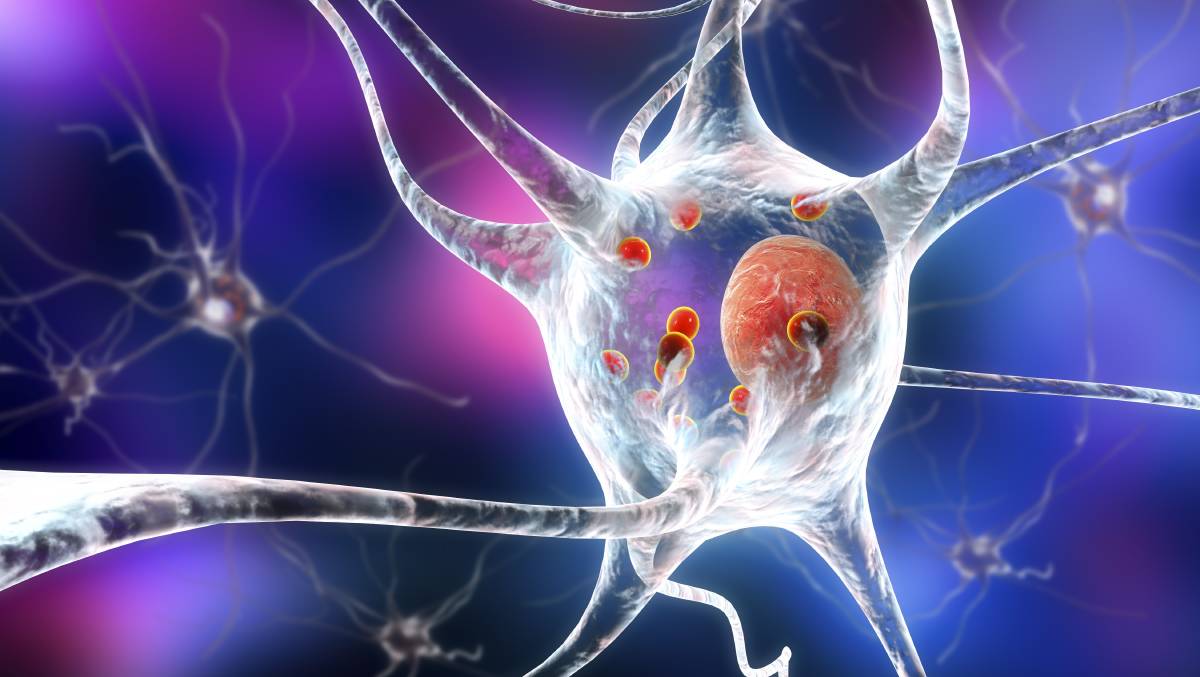 An illustration of a neurone for Parkinson's. Photo: Shutterstock

Professor Andrew Hill explains neurodegenerative diseases and where to from here.

And for every famous face linked to these illnesses, there are thousands more everyday people whose lives have also been changed.

Professor Andrew Hill couldn't tell the 200 people gathered in Wodonga on Tuesday what they wanted to hear - a cure is close.

But the La Trobe University Institute for Molecular Sciences director did have cause for hope in his lecture at the Border campus.

When Prof Hill was in London undertaking his PhD on mad cow disease in the 1990s, the debate was raging on whether the proteins, amyloid-beta or tau, were ultimately to blame for Alzheimer's disease.

"These are the two demented proteins that are involved in Alzheimer's ... amyloid-beta is a protein that can misfold into a bad shape and form amyloid plaques, and tau forms these neurofibilliary tangles," he said.

"These two different structures - these tangles made of tau protein, and these amyloid plaques made of amyloid-beta - were both seen in people who died of Alzheimer's disease. "My first scientific conference I went to during my PhD ... it was like a religious convention, on the one hand you had the amyloid-beta protein, 'the Baptists' on one side, and the 'Tausts' on the other side.

"But since that time we've kind of converged, and they're both involved in the disease, though we don't understand why."

In Parkinson's, the focus is squarely on Alpha-synuclein.

It forms into lewy bodies, which like the demented proteins to blame in the case of Alzheimer's, "build up in the brain like rusty deposits you get on cars".

"Parkinson's disease at the pathological level, is a loss of very specific neurons in the brain," Prof Hill said.

"The special neurons you're losing release a neurotransmitter called dopamine ... which allows us to undertake normal movement.

"Several different drugs have been developed which can either replace or mimic the action of dopamine.

"But this kind of therapy isn't really curing Parkinson's, it's more treating the symptoms.

"And that's where we're at now - we have treatments that can alleviate symptoms, but don't cure the neurodegeneration that's taking place."

Parkinson's and Alzheimer's are speeding up our natural loss of neurons, which "wake up the nervous system".

"We're constantly losing these neurons as we age - they don't get replaced - and that's where we start to forget things as we get older," Prof Hill said.

"By losing all those neurons, the structure of the brain of a person with advanced Alzheimer's disease has vastly changed.

"So why are these diseases becoming more common? The simple reason is our life expectancy has increased."

Alzheimer's, first described just over 110 years ago, is the most common form of dementia - accounting for more than half of cases.

"It is a disease of aging, and the risk of getting Alzheimer's disease rises twice for every five years after the age of 65," Prof Hill said.

"Women are more susceptible than men, and the life expectancy following diagnosis is about seven years.

"These diseases can occur randomly and they can also run in families ... there are some mutated genes that can be passed down.

"(But) they are diseases of aging and are going to become a very important problem for us to try and tackle."

Simple problem solving, abstract thinking, and memory tests are common ways to investigate whether somebody has one of these diseases.

"I think there was trouble for a while asking patients to remember who the Prime Minister of Australia was," Prof Hill joked.

"Diagnosis is usually only confirmed when you can look at a piece of brain tissue."

The former costs $2000 and the latter $375, and while there are pros and cons to each, both are not good for routine testing.

"So what we've been doing in my lab is looking at exploiting some new technology in using DNA sequencing to see if we can develop a blood test for Alzheimer's, Parkinson's and other neurological diseases," Prof Hill said.

"We think the changes in the brain (relating to the proteins) are happening up to 20 years earlier than when someone has full-blown disease."

Sequencing the human genome was first achieved in 2001 and since then the cost has reduced from $100 million to $1000, "revolutionising" how the role genetics play in all types of diseases can be understood.

"The test we've been developing has involved us collaborating with the Australian Imaging, Biomarker and Lifestyle Study of Ageing which has been running since 2006," Prof Hill said.

A front page of The Age in September, 2016 featured Prof Hill's colleague Lesley Cheng, and their work in identifying 16 abnormalities in the blood of Alzheimer's patients.

"We could correctly diagnose 13 out of 15 Alzheimer's patients, which gives us a very good accuracy of diagnosis, from a blood sample, of 86 per cent," Prof Hill said.

If healthy people who were flagged by the blood test go on to develop Alzheimer's, the accuracy of the test could be more than 90 per cent.

"So what we're currently doing at the moment is we're following up with these patients to see if they do develop Alzheimer's disease, and also to refine a signature of the 16 small genes."

Unfortunately, only a few months ago clinical trials of an antibody to work against amyloid-beta were stopped.

"The company who were undertaking the trial said that while they could reduce the amount of these demented proteins in the brain, it wasn't enough to change the cognition of the patient," he said.

"So while you reduced the proteins, you still have the other symptoms which were the memory lost and the motor symptoms.

"This is really unfortunate for the field, and it's left us wondering what kind of things do we need to do to try and cure this disease?

"I think developing early diagnostics might be one way of doing this - if you can perhaps apply these kind of therapies at a much earlier stage, before you have lots of these proteins in your brain, that might slow down the disease enough so you don't get those symptoms.

"We need to treat these patients earlier but this means we need a test to detect the disease earlier.

"There is no definitive cure yet."

Prof Hill and his research team's work at the $100 million LIMS facility, combined with the efforts of brilliant minds across the country, will be crucial to address diseases that affect more than 55 million people worldwide - a number that will double every 20 years here on in.