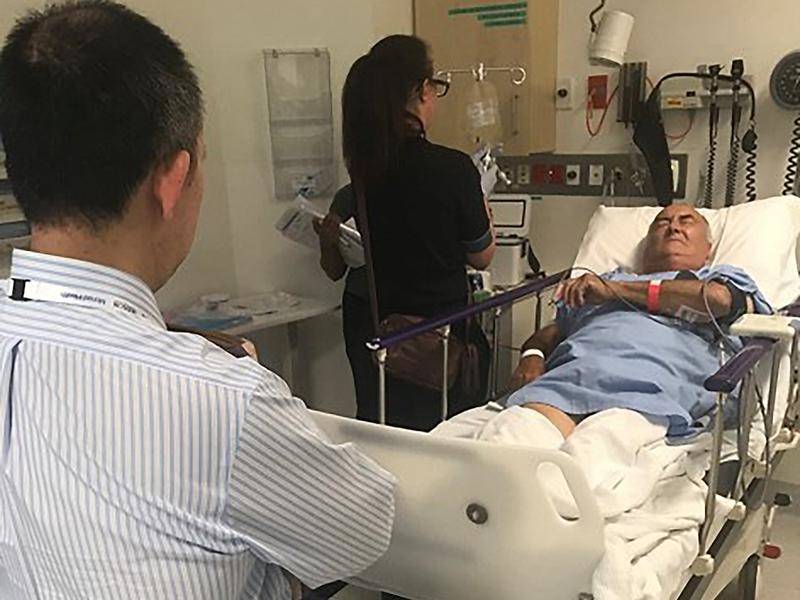 When Kevin Baird was rushed to a Melbourne hospital after having a stroke, he didn't expect to become the public face of a future world-first treatment. The 6...

When Kevin Baird was rushed to a Melbourne hospital after having a stroke, he didn't expect to become the public face of a future world-first treatment.

The 67-year-old took part in a trial using stem cell infusions as a possible therapy to reduce his brain injury and improve his recovery after being admitted to Monash Medical Centre in February.

"Before the treatment they asked me if I could raise my hands ... when I actually tried to, I couldn't. I was only speaking in a mumble as well," Mr Baird said.

Within 24 hours of suffering a stroke, he was intravenously given amniotic stem cells from a donated placenta.

About a day after that first phase of treatment, Mr Baird noticed an improvement and now suffers only a mild facial droop with no further damage to his brain tissue.

"I've come on in leaps and bounds since then. I believe it helped tremendously," he said of the trial treatment.

It's this success story that researchers from Monash Health, La Trobe University and the Hudson Institute of Medical Research hope will be replicated in other patients.

"After a stroke the key is working to save neurons before they die. 'Time is brain' is the catchcry, so by rapidly treating a stroke and saving brain tissue, we reduce lasting damage which can cause disability," La Trobe University professor Chris Sobey said.

"It is a long process, but we are hopeful that this collaboration can contribute to the next great breakthrough in global stroke care, and prevent ongoing disability for patients."

While there are other treatments for stroke such as clot-busting medications, these are still not enough for all patients.

"A significant number of patients may not have access to these therapies or they're not possible," Monash Health associate professor Henry Ma said.

"Stroke is the second-leading cause of death globally, and leaves a huge number of people with significant disability."

The cells carry no risk of rejection as they don't need to be matched to individual patients.

More people are needed for the safety trial before a second phase proceeds.