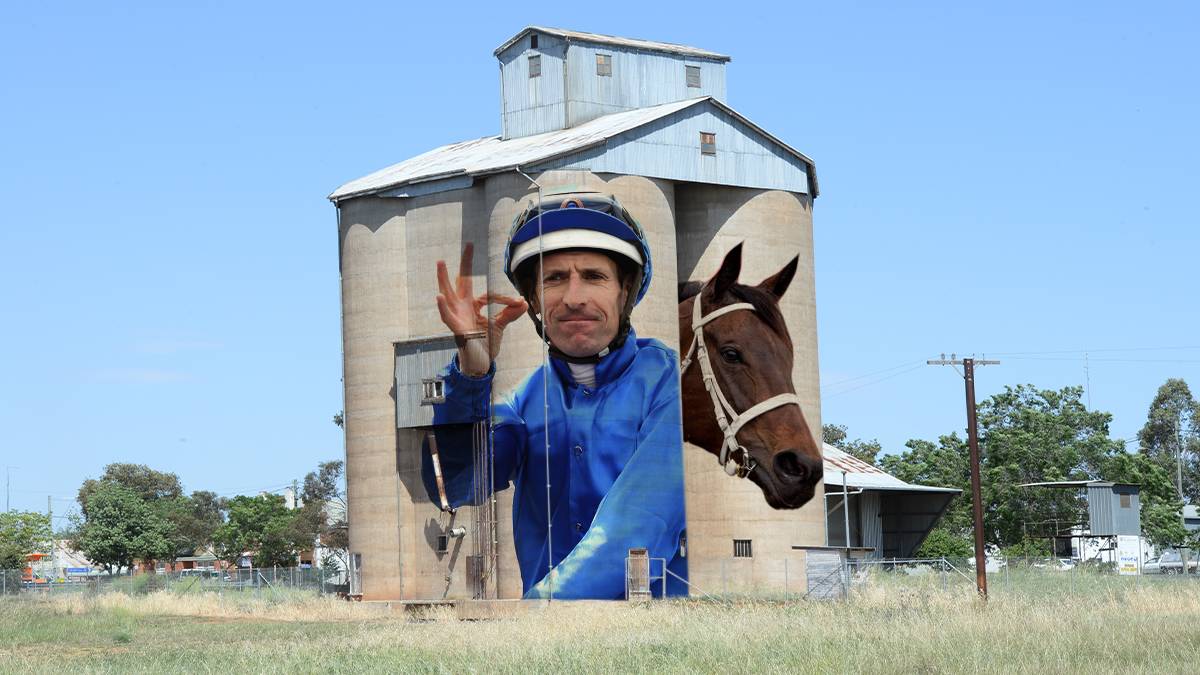 She's apples: a montage of how the Dunedoo silos might look if Dunedoo decides to honour their favourite son Hugh Bowman and the wonder mare Winx. Photo montage by Fairfax.

Will Winx be the new drawcard off the track on silo circuit?

The champion mare Winx and her rider, Dunedoo’s Hugh Bowman, are set to be immortalised in silo artwork.

The idea is still in the planning stage but moves are afoot to honour Winx and Bowman’s historic fourth Cox Plate, achieved at Moonee Valley two Saturdays ago.

The Dunedoo silos were sold privately by GrainCorp a few years ago and are now owned by farmer Brett Yeo, Wattle Vale.

Mr Yeo would not disclose what exact plans were in motion but said there would be a possible announcement shortly and that honouring Winx and Hughie were high on the list of possibilities as artwork for the silos.

Already residents of Dunedoo said putting Hugh Bowman and Winx on the side of the silos would be a fantastic tourist attraction for the town. It has the support of Hotel Dunedoo publican Glenn Chapman. “That would be ideal seeing Winx and Hughie coming into town.”

Mr Yeo said silo artwork was becoming a major tourist drawcard around  Australia and this could give  Dunedoo its big chance to join the silo artwork circuit.

Asked if Hughie and Winx might be honoured on the silos, Mr Yeo said: “That’s correct. It would be a great sight in our main street”. But he added it was “still in the planning process. We’ll find out more in the next few weeks.”

Because the silos are on private land unlike many other places for silo artwork, Mr Yeo will have to seek public and or private support to complete the project, if permitted by council.

Warrumbungle Shire Council oversee the area and would have to be involved.

“This silo trail is really taking off and these silos could become a valuable addition to the town’s profile. The timing is right,” Mr Yeo said.

Australians have fallen in love with Winx, now rated the best horse in the world, after her historic fourth Cox Plate – one of the great moments in turf history – and she donkeylicked the foreign raiders.

Winx has raced 39 times for 33 wins and 3 second placings and 22 Group One wins (a world record) and an amazing 29 wins in a row. She has amassed $22.9 million in prize money. She has been spelled after the commanding Cox Plate victory and is expected to return for a final autumn hurrah in Sydney before retirement.

Hugh’s father Jim Bowman and Hugh’s mum Mandy, who farm at Dunedoo, were on hand to see Hugh’s fourth Cox Plate in a row on Winx.

The Bowmans are all avid horse people and Hugh said he couldn’t  thank his father enough for teaching him to ride from an early age. Jim was also a part-time trainer for many years.

Hughie used to ride at barrel events around the Dunedoo district when he was young. One person said they always remembered seeing a horse tethered to the front fence at the Bowman’s place, Merotherie.

The Bowman’s largely escaped the bad fires that swept through the area last year, but Hugh became involved in helping the people and farmers affected by the Sir Ivan fires in charity drives.