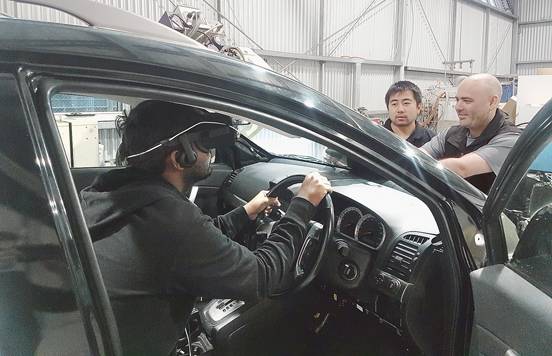 IN THE HOT SEAT - from left, Deakin University's Gokul Thirunavukkarasu, Tho Nguyen and Michael Mortimer test the simulator

IT'S NOT often you see a car parked inside a nursing home. But renovations are under way in a room of an Inverell aged care facility to make way for a Holden Captiva.

IT'S NOT often you see a car parked inside a nursing home. But renovations are under way in a room of an Inverell aged care facility to make way for a Holden Captiva.

The shell of the four-wheel drive car will form part of a virtual reality (VR) driving simulator, in which older drivers can brush up on their driving skills without being on the road.

It will be installed in a custom-made room at McLean Care's aged care home in Inverell, northern NSW.

The project, a collaboration between McLean Care and Victoria's Deakin University, aims to create a safe environment for drivers aged 70-80.

"This will be used as a self-help tool for older drivers who want to make an informed choice about whether they want to keep driving, and also for other residents, perhaps with dementia, to relive the experience of driving a car," Ms Thompson said.

In NSW a practical driving test is required every two years after a person turns 85 to see if they are fit to drive. 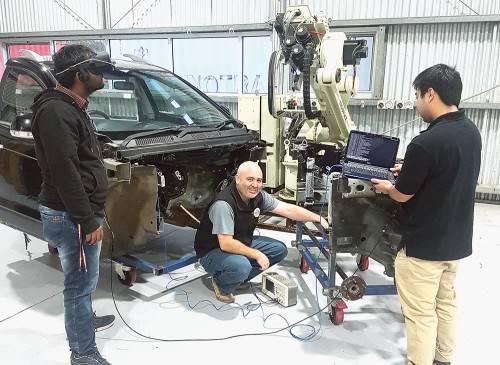 The team build the simulator in the university's VR Lab. The idea is to get seniors to feel what it is like to drive again.

The VR simulator is being built at Deakin University and Ms Thompson hopes it will be installed in the home by July for the first phase of testing.

The shell of the Captiva will be fitted with VR technology and the driver will wear a headset for the "full" experience. They will also be in control of the steering wheel, gear stick, clutch, brake and accelerator, as if driving a "real" manual-drive car.

Ms Thompson said the VR environment will reflect the streets of Inverell. "We will also have an out of town driving experience, complete with local wildlife hopping by."

Drivers will be connected to monitors that will measure things such as their heart rate and stress levels.

Ms Thompson said the technology could help people keep their driver's licences for longer, "ensuring older people in regional, rural and remote communities have equitable access to services that help them maintain their health, independence and wellbeing as they age".

Plans include expanding the program to other towns and locations.