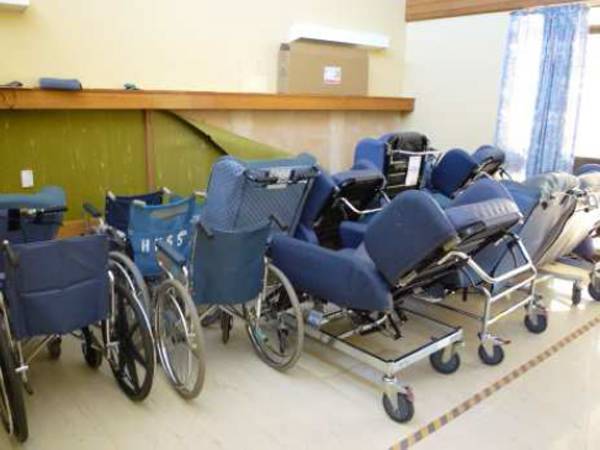 Broken chairs at the Oakden nursing home in South Australia.

TWO South Australian government ministers - former health minister Jack Snelling and former mental health minister Leesa Vlahos - have been criticised over their handling of the scandal-ridden Oakden nursing home, but a report by the Independent Commissioner Against Corruption has cleared them of maladministration.

TWO South Australian government ministers - former health minister Jack Snelling and former mental health minister Leesa Vlahos - have been criticised over their handling of the scandal-ridden Oakden nursing home, but a report by the Independent Commissioner Against Corruption has cleared them of maladministration.

Commissioner Bruce Lander described the elderly people who lived at Oakden as "some of the most frail and vulnerable persons in our community" and said they were "forgotten and ignored".

"They did not have a voice. They were obliged to live in a facility which could only be described as a disgrace, and in which they received very poor care."

Mr Lander said every South Australian should be outraged. "It should not have happened. It must never happen again."

Mr Lander said it was astonishing that, to a large extent, what was occurring at the Oakden Facility was unknown to ministers and chief executives.

"They ought to have known.

"While I find that each Minister who had responsibility for the Oakden Facility was responsible for its failures the evidence does not support a finding of maladministration in respect of any of them."

South Australian Premier Jay Weatherell says he was "deeply sorry" for the abuse suffered by the nursing home's residents.

Leading seniors' advocacy group Council on the Ageing SA said the inquiry's findings, "demonstrate failures at just about every level".

Chief executive Jane Mussared said "What happened at Oakden is nothing short of a tragedy and the release of this report again confirms that. The way we care for vulnerable and disempowered older citizens is a true measure of our society. The abuse, neglect, poor practices and appalling conditions suffered by residents of Oakden will forever be a shameful blight on our state's history."

"It's hard to comprehend how such systemic abuse could go on for as long as it did without intervention and despite families repeatedly raising the alarm.

"But, as the report acknowledges, simply closing the door on Oakden leaves open the very real possibility that similar failures could be perpetuated in the future in other settings. We cannot allow that to happen.

"We must use the lessons of Oakden to ensure that our services for vulnerable older people work with, not against, families, that governance and accountability is clear, that they follow best practice, that they are staffed by our very best people and that they are places of safety and care.

"Our accreditation systems need to be more robust to ensure families can be 100% confident in the care of their loved ones. Oakden, during the time of the scandal, got full marks, and this put a question mark over the credibility of the accreditation system that's designed to protect us and that we all rely upon as a measure of quality."

Ms Mussared said she saluted the families who, against the odds, stuck to their convictions and made sure their voices and concerns were heard.

"A further shame of Oakden is that it casts a shadow over the many very good aged care workers who do a wonderful job every day. But Oakden should serve as a terrible example of what can go wrong and why it's up to all of those with an opportunity to do so, to be vigilant, to speak out and to report anything you see or hear that doesn't feel quite right."

Ms Mussared said since the publication of The Closing the Gap report in 2011, there had been several very serious incidents including at accredited aged care facilities like Oakden, suggesting a review and repair of the holes in the legislative safeguards, redress and services available were urgently required.

"We need to put everything on the table, from the models of care, the culture, staff competency, governance and accreditation. Topdown failures mean we need to rebuilt from the ground up and the time is now," she said.

"We are advocating for a more comprehensive approach, particularly given legislative change is likely to take some time. The State Government must develop and implement a coordinated response framework, informed by a clear human rights perspective."
Chief Executive of Aged Care Services Australia, Pat Sparrow said "suffering like that experienced by some of our most vulnerable fellow citizens should never occur in a civilised society.

"ACSA hopes Commissioner Lander's final report will help to inform governments of better policies to support older Australians, particularly when it comes to access to mental health services from within residential aged care."

Anyone with concerns about people in aged care can contact the national Aged Care Complaints Commissioner, a state-based elder abuse agency or the Police.