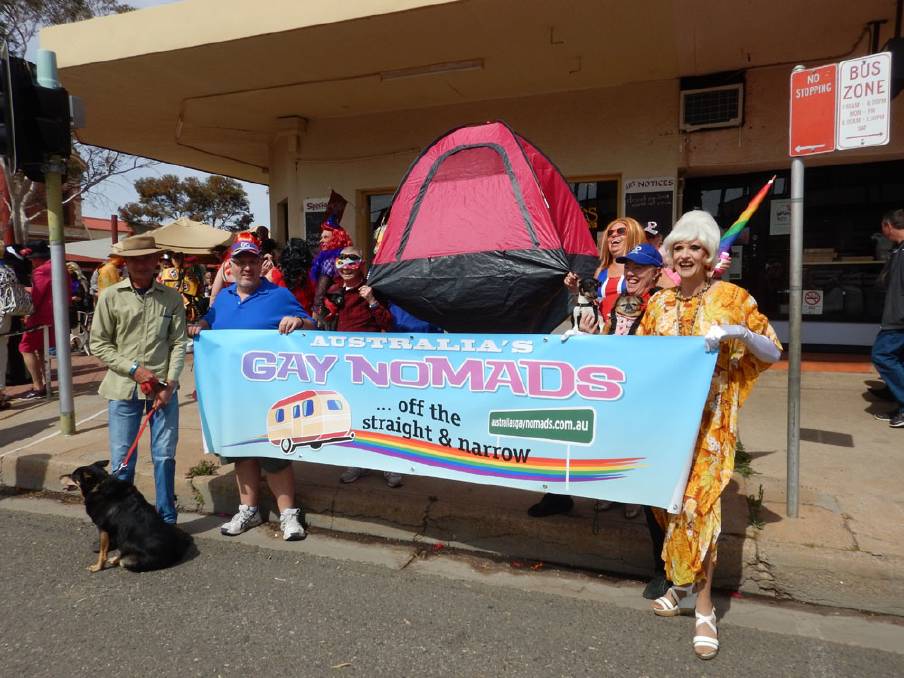 SIMPLY FABULOUS – The Australian Gay Nomads is a fun-loving group that hopes to encourage acceptance.

FEATHER boas, bright caravans and drag queens – these travellers are adding colour to the grey nomads’ rainbow. The Australian Gay Nomads launched a few years ago to bring LGBTI campers together.

The Australian Gay Nomads launched a few years ago to bring LGBTI campers together.

Lynne Hocking, now in her late 50s, is Camp Mother. She founded the group a few years ago with Glenn Watson, a Sydney-based drag queen known as Miranda Fair.

Having worked in tourism most of her life, semi-retired Lynne came up with the idea while travelling with her partner Linda and their two dogs.

She created a Facebook page, which now has more than 800 followers, and organises regular meet-ups.

The most recent was at the Broken Heel festival in Broken Hill, spiritual home of Priscilla, Queen of the Desert, where 60 other nomads unhitched and set up camp under the club’s bright pink banner.

Campers are all ages and come from all walks of life, from Miranda in her 1963 retro van, to a Scottish lesbian in her Kombi, to a 70-year-old transgender man with a brand new campervan. Many haven’t met before and are looking to make new friends.

“We’re a group of like-minded people who enjoy caravanning and camping,” Lynne told The Senior on her way to Emerald in central Queensland.

“Miranda Fair sings, we have progressive dinners – it’s just a hoot and a holler.”

There is a strong focus on fun, with the group‘s motto being “Off the straight and narrow”.

Acceptance is the group’s main goal. “We’ve had straight campers coming up and saying ‘My daughter’s gay, I can’t wait to tell her about you’.”

Lynne hopes their presence will also help young LGBTI people in rural and remote areas and remind them they’re not alone.

Caravan parks are also becoming more accepting of gay travellers, with the Caravan Industry Association of Australia launching a rainbow accreditation in May.

She is now organising the group’s next big meet-up and has her eyes on the Orange F.O.O.D. Week in NSW in April.

Most members are from Victoria and NSW but the group hopes to expand nationally.