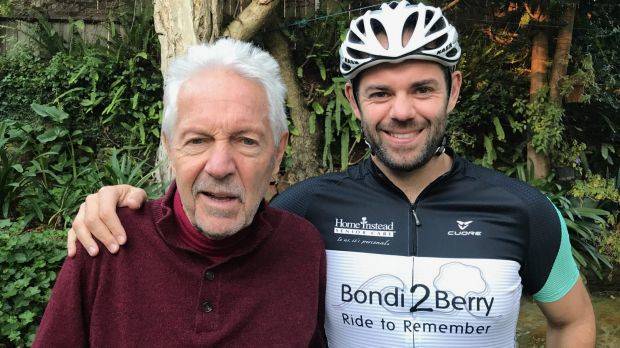 A new paper published in The Lancet has found that one in three cases of dementia can potentially be prevented and we need to start thinking about it early.

IN retrospect, the signs made sense. Doug Young loved cars, so much so that he spent his weekends restoring them.

Fixing up a car might take Doug a couple of weekends, but he had been working on the latest car for several years without any progress. He was also coming home with dings on the family car, unusual for a man who cared meticulously for his vehicles.

Then, in 2011, Doug was diagnosed with dementia. He became one of more than 410,000 Australians with the disease, which has become the country's second leading cause of death.

At first, Doug's decline was gradual and the typical "Aussie bloke" who was proud, and used to doing things himself and caring for his family, became frustrated as he became less able.

"He lost the ability to drive, he lost his licence - that was a huge turning point - and then over the last few years it's been a steady decline," 36-year-old son, Nick explains.

Doug, 74, still remembers nursery rhymes which he sings with Nick's 4-year-old daughter Isabelle. "Otherwise there's no awareness of where he is or recollection of his family," Nick says. "It's reached the point where we are now looking for permanent care."

Nick's mother, who has spent the last 15 years caring first for her own mother, who also had dementia, and now her husband, is "at the end of her tether emotionally, physically and mentally".

While the majority of dementia is not inherited, Nick fears his own fate.

"I fear, I truly fear that my wife will be doing the same thing for me. I'll forget someone's name or I'll forget that I had to do something and straight away, I can't not think maybe this is the start."

A new paper published in The Lancet has found that one in three cases of dementia can potentially be prevented and we need to start thinking about it early.

Dementia may be considered a disease of the elderly, and it is true that it usually occurs in people aged over 65 years, but what we do when we are much younger can affect our likelihood of getting it.

The Lancet recommendations for improving brain health and minimising the risk of dementia are: increasing education (past the age of 15), physical activity and social engagement while reducing smoking and obesity, treating blood pressure, depression, diabetes, and hearing impairment.

Until a cure is found for dementia, Nick Young wants to raise awareness and money for Alzheimer's Australia. Last September he and friend Pierre, whose mother has dementia, began a 155 kilometre annual cycle, the Bondi2Berry Ride to Remember.

People they had been cycling with for years signed up for the ride, revealing they also had a parent or grandparent with dementia.

"These were close friends we'd known for years and years and years," Nick says. "At no point would we know that they had been affected by dementia, or likewise my dad or Pierre's mum. That emphasised it even more to us - people everywhere are affected and noone talks about it... I wasn't going to blurt out my dad's got dementia and he doesn't remember me."

"We should think about prevention in childhood and consider education and lay the grounds for a brain healthy lifestyle," says lead author Professor Gill Livingston of University College London.

"The number of people with dementia is increasing due to the ageing population with the welcome reduction in premature morbidity. This is happening in all countries.

"However the rates per 1000 older people is reducing in some high income countries and this is in the more highly educated. This is probably because education confers some physical brain resilience and makes people more likely to change their behaviour in a healthy way."

Addressing cognitive function through education makes sense, but how do factors like obesity, diabetes or blood pressure play a part?

"We think weight and other such factors work mainly by decreasing blood flow to the brain and increasing insulin resistance so the brain is bathed in excess sugar," Livingston explains.

"Hearing loss might either add to the cognitive load of a vulnerable brain leading to changes in the brain, or lead to social disengagement or depression and accelerated atrophy, all of which could contribute to accelerated cognitive decline," they suggest.

"No randomised trials are available to show that exercise prevents cognitive decline or dementia, but observational studies have found an inverse relation between exercise and risk of dementia," the authors say, adding that its benefits include improved balance, reducing the risk of falling, improving mood, function and lifespan.

"The association with cognitive impairment might be due to the link between smoking and cardiovascular pathology, but cigarette smoke also contains neurotoxins, which heighten the risk," the authors explain.

There is debate about whether depression contributes to the risk of dementia or is a symptom of dementia (it is believed that more than 20 per cent of those diagnosed have depression). While research findings vary, the authors suggest there is reason to believe it may be a possible cause.

"It is biologically plausible that depression increases dementia risk because it affects stress hormones, neuronal growth factors, and hippocampal volume," they say. "Antidepressant prescriptions have increased in the past three decades and this increase is hypothesised to affect dementia incidence since animal data suggest that some antidepressants, including citalopram, decrease amyloid production."

"Evidence is growing that social isolation is a risk factor for dementia and it increases the risk of hypertension, coronary heart disease, and depression," the authors explain. "Social isolation might also result in cognitive inactivity, which is linked to faster cognitive decline and low mood. All these are risk factors for dementia themselves, which highlights the importance of considering the social engagement of older people and not only their physical and mental health."

To find out more about the Bondi2Berry Ride to Remember on September 9 or make a tax deductable donation, please visit bondi2berry.com/donate