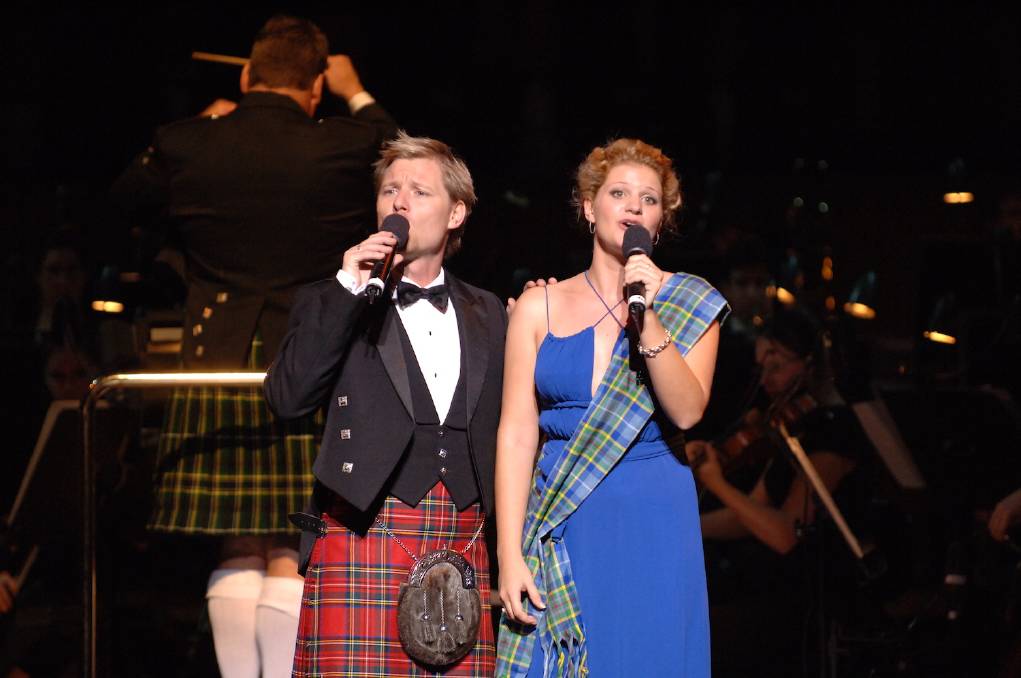 Going solo: Mirusia and Gregory Moore featured as soloists in the Melbourne performance of Scotland the Brave

FOR nearly 20 years Andrew McKinnon has produced Scotland the Brave, taking it all over Australia, to New Zealand and North America.

FOR nearly 20 years Andrew McKinnon has produced Scotland the Brave, taking it all over Australia, to New Zealand and North America.

Last month’s performance at Hamer Hall was the first time I’ve seen it. While not a seasoned fan of Scottish music, I’ve enjoyed the big sound and dynamic visuals of the handful of Scottish-themed shows I’ve seen – live and on television.

Hamer Hall’s performance was big – more than 100 performers took the stage. Musically and visually Scotland the Brave takes you through a swag of emotions, more so than I’d anticipated.

Soloists Mirusia (soprano) and Gregory Moore (tenor) brought warmth and purity of voice that touched hearts, the pair combining in some enchanting duets, including Sailboat, The Road to the Isles and O Waly, Waly.

Also taking the stage was the superb concert orchestra, the Melbourne Philharmonic Choir, Scotch College Pipes and Drums and the amazingly athletic and beautifully choreographed Lyons Highland Dancers. Together with the soloists, they were all expertly conducted by Australian composer, conductor and master orchestrator, Sean O’Boyle AM.

The highland dancers were a delight to behold. I’d never before really appreciated the combination of technique, endurance and strength necessary to create those distinctly traditional Scottish moves in a way that seems so beautifully fluid and effortless.

Both maestros were impressive in all their performances throughout the show. A particular highlight in the first half of the performance was The Gael, which was penned in 1990 by Dougie Maclean. It gained worldwide recognition as the theme in the film Last of the Mohicans.

In the second half of the show, the pair played an exciting pipe and fiddle duel, which set the energy levels about right for the Scottish sing-a-long that followed. The audience lustily joined in, adding a couple of thousand extra voices to the sound that filled the auditorium.

Following that, the pipes and orchestra led us through Highland Cathedral before a stirring finish featuring the entire company performing three iconic Scottish numbers – Amazing Grace, Auld Lang Syne and Scotland the Brave.

All up it was a thoroughly enjoyable evening – a celebration of the best of Scottish music and dance with an excellent mix of stunning individual and collective performances.

Little wonder that nearly two decades on, Scotland the Brave continues to pack out this country’s finest concert venues.