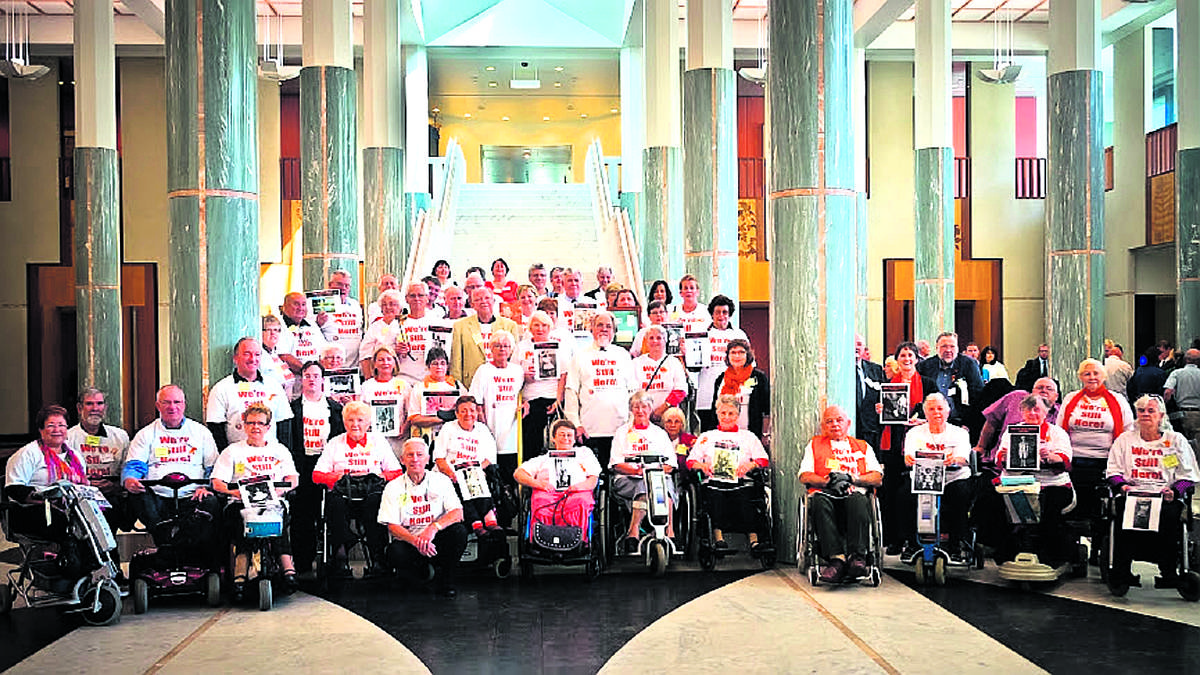 UNITED – Members of the polio community in Canberra in 2012 lobbying for support for polio survivors.

IT’S BEEN dubbed Australia’s forgotten disability. And while our country was declared polio free by the World Health Organisation in 2000, there are still thousands of Australians living with the legacy of the crippling disease.

IT’S BEEN dubbed Australia’s forgotten disability. And while our country was declared polio free by the World Health Organisation in 2000, there are still thousands of Australians living with the legacy of the crippling disease.

As we mark Polio Awareness Month, peak body Polio Australia estimates there could be up to 400,000 Australian polio survivors.

And with many contracting the disease – which can lead to permanent paralysis or deformities – as children from the 1930s-’60s, survivors are now in their senior years.

Decades after these survivors have recovered and moved on with their lives many symptoms of the disease are returning in the form of post-polio syndrome.

Susan Ellis was aged two when she contracted poliomyelitis, dubbed “infantile paralysis” back then, while living in the Sydney suburb of Bankstown.

“I had fever and vomiting, then couldn’t get up,” said Susan, now 62 and living in the NSW Southern Highlands.

“I was in hospital for three weeks, then spent 10 months in JohnWilliamsHospital for handicapped children in Wahroonga.

“I remember bits and think it would have been quite traumatic for kids. Some were away from their families for years.”

The virus left Susan paralysed in her left leg with half muscle strength in her right thigh and having to wear callipers.

“It left me with what I call ‘the polio limp’ and I had surgery to lengthen my leg when I was 12,” she said.

“But like most survivors I remained strong and didn’t want to give in.”

When Susan was 30 she started to get pains and found it more difficult to get around.

“I realised I couldn’t lift and swing my right leg into the car anymore.

“It was a bit scary, so I started using a stick, then a walker, and now rely on a mobility scooter to get around.”

Susan is now vice-president of Polio NSW and this month will join other polio survivors in calling for more federal funding for people living with the late effects of polio.

“When we were cute little children we had lots of support. Then we all grew up, achieved what we wanted, and blended into the woodwork.

“But now we are ageing with a dis­ability and also experiencing a recurrence of symptoms and weakness, but we are still waiting for the government to fund a public polio clinic or for post-polio education for health professionals.”

She said it was still unclear exactly how many polio survivors there are in Australia.

“We are urging any polio survivors to register on the Australian Polio Register database at either Polio NSW or Polio Australia websites.”