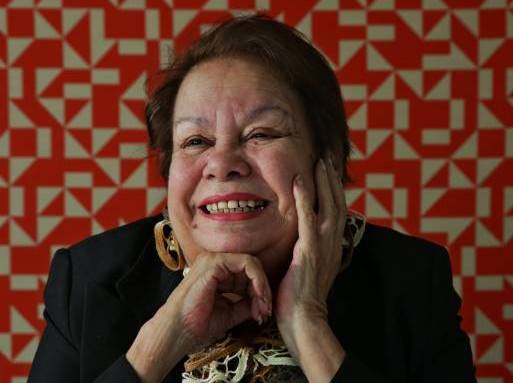 Auriel Andrew stars in Buried Country: The Live Show, which kicks off its national tour at The Playhouse in Newcstle on August 20. Picture: Simone De Peak

Auriel Andrew stars in Buried Country: The Live Show, which kicks off its national tour at The Playhouse in Newcstle on August 20. Picture: Simone De Peak

DID you know there is a woman, living in Waratah West, who was inducted into the Northern Territory Indigenous Music Awards Hall of Fame in 2005?

Who won the Jimmy Little Lifetime Achievement Award for Contribution to Aboriginal & Torres Strait Islander Music at The Deadlys in 2008 and who is the proud recipient of an Order of Australia Medal in 2011 for her contribution to art, music and education?

Well, now you do. Her name is Auriel Andrew.

Born in Darwin in 1947 and growing up in Alice Springs, Andrew made her professional debut at Coober Pedy in the late 1960s, and by the early ’70s had moved to Adelaide to become a TV regular on Reg Lindsay’s Country Hour.

Her first album Just for You was released in 1971. She released four more.

Andrew has performed at the Opera House and for the Pope, and has made classic songs by legendary Aboriginal songwriters Bob “Brown Skin Baby” Randall and Herb Laughton her own. On her most recent album, 2013’s Ghost Gums, she penned her own lyrics.

During a conversation punctuated by laughter Weekender discovered Andrew has many, many more stories to tell. She has a habit of making up lyrics on the run, breaking off a conversation mid-sentence to start singing. With any luck she will put pen to paper again soon and express them through song.

Originally published in 2000, it was only in 2015, when new updated editions of Walker’s book and CD were released, that Buried Country took the leap from cult classic to “a masterpiece” as described by the Australian Book Review in its 2015 Books of the Year list.

Long before Aboriginal painters, film-makers and dance companies were winning acclaim, it was country music that gave Aboriginal people a voice in modern white Australia. It was all about telling a story and celebrating the land.

Buried Country traces the history of Indigenous country music, from the gospel songs thrust upon Aboriginal people in white missions to turn-of-the-century string bands to harmony groups that used gum leaves as mouth organs and political songs of the 1970s.

Andrew is keeping her excitement in check – just. It bubbles to the surface without warning and she quickly shuts it down again. She says she has been “let down” in the past by concert promoters making promises that weren’t kept.

She isn’t going to be disappointed this time around. First rehearsals for the show were held in Tamworth during January’s Country Music Festival in January, and a special invite-only showcase was attended by Paul Kelly, Catherine Britt, Allan Pigram and others.

Andrew, with her wicked sense of humour and quick wit, is a delight. These days she is busy being a grandmother but her tales of touring this land as a country music pioneer are spellbinding. It takes her a while to get warmed up but when she does, there’s no stopping her. When asked if she isn’t a fan of interviews, she laughs.

Andrew has two children and, she says, more grandchildren, nieces and nephews than she can count. In her culture, extended family are treated as kin.

“My kids are all grown up. Just the two, thank God. I don’t know why, though, because the Pill wasn’t around back then. I tell my kids, ‘I was very shy you know, if I wasn’t you would have been a lot older’. They always say ‘Mum, shut up!’.”

Andrew blazed trails as a female Aboriginal country singer. She was the first to make an impact on Australia’s musical landscape, certainly.

“I’ve been singing for more than 40 years and I didn’t think I’d even reach 40. There were seven of us children and we’ve lost three sisters and two brothers. Lorraine reached 60 and then cancer got her.

“That leaves my sister Rhonda and myself. She’s the third youngest and I’m the baby.”

Andrew’s mother died when she was “about 50”.

“There was no birth certificate for her but you go by what people talk about. We can only guess their ages roughly by what they talked about, for example, your mother was about this age when that happened,” she explains.

“We’d go by songs that Slim Dusty used to sing. He had a hit The Rain Tumbles Down In July and I was about 8 or 9. Nothing was written down.”

Andrew’s mother was from the Arrernte tribe and her father was a white Australian of Cornish extraction. When asked if she can speak her traditional language, she laughs.

“No, I can only swear in it. Mum wasn’t allowed to speak her language. When she was taken off her family and put in the Bungalow School, Telegraph Station it’s called now, she couldn’t speak English.

“None of the children could and they had to sit in a classroom all day and look at the teacher who was speaking English and they had no idea what they were talking about. Gradually they got the hang of it.”

Music was a constant in her life, thanks to her opera-loving mother who adored tenor Mario Lanza and pianist Winifred Atwell.

“When we were little, Lorraine and I, we had this old wireless, and it was huge. This one had the guts taken out of it so we could crawl into it.

“I was 4 and she was 5 because we lived in Mt Isa with my cousin at the time because when my parents split up he took all the kids from her – Mum was Aboriginal and he was white so she had no say.

“He put the other kids in St Mary’s school and Lorraine and I left Alice Springs with his cousin and her husband. We had a cubby house and in it was the wireless.

“Lorraine would climb in and I’d say ‘I think I’ll turn the wireless on’ and I’d turn the nob and ‘click’, she’d start singing a little song. And then I’d go ‘I’ll switch it off now, click’, and she’d climb out and I’d climb in to do the same and sing ‘Down by the station early in the morning’.

“That was my first recollection of singing and I loved it and wouldn’t shut up.”

Andrew’s mother would stand her on the table and she’d sing country songs to a crowd.

“Some people would give me two bob and I was happy because I had all the friends – they wanted me to go and buy lollies for them,” she laughs.

“We never got to the end – instead of thinking let’s play it from halfway and learn the rest, nah, we were just half-a-song kids.”

Andrew performed in the first all-Indigenous show at the Opera House and was present when Carol Burnett, dressed as a cleaning lady, pretended to hammer a nail into the stage and yelled out to the crowd “The Opera House is finished!”. She also sang Amazing Grace in Pitjantjatjara for Pope John Paul II during his Australian tour in the 1980s, having learnt the language specifically for the occasion.

She moved to Newcastle in 1982 and now calls Waratah West home. Andrew’s husband Barry, a Novocastrian, reckons she chased him there. They’ve been married for 28 years and her exuberant slapstick complements his dry sense of humour.

She doesn’t do much performing these days, and she clearly misses it.

“We used to tour the clubs – they’d book three or four acts and a band and you had that camaraderie backstage and I loved it,” Andrew says.

“You’d be with the same people a lot and it was just so much fun. You’d talk about everyone else and when you left they’d talk about you. After we finished the show we’d load up our cars and we’d stand outside and start telling stories and we’d start laughing.

“It was terrible in the winter time because you’d be freezing but you didn’t want to get in the car because you’d be like, ‘Yeah what about that time’, and ‘Did you hear about what’s her name?’

“I often ring up Col Harvey and fellow performers and musicians. I only spoke to Chad Morgan again today.

“You got close to the people you travelled with.”

Buried Country: Live In Concert premieres at The Playhouse on August 20. Tickets are on sale now.

The story SONGS OF THE PEOPLE first appeared on Newcastle Herald.