With Logies and three decades on screen, Georgie Parker isn't slowing down any time soon.

With a slew of Logies under her belt and more than three decades on Australian television screens, ever optimistic Georgie Parker isn't slowing down any time soon.

From a young age, two-time Gold Logie winner Georgie Parker, best known for her roles on A Country Practice, All Saints and Home and Away, knew she wanted to be an actress.

"It wasn't really a decision that I made, it was just very clear that it was something I could do and something I was good at. I discovered my passion early on. I love storytelling and the interaction between the audience and the actor - I never not wanted to take that path," she says.

It's an overcast day when I meet Parker in Balmain East - the 57-year-old has her hair and make-up done ready to shoot some scenes for Home and Away at Channel 7's Eveleigh Studio. I'm worried it will rain, but Parker takes out her phone and pulls up a weather tracking app that Home and Away's cast and crew use when filming on location in "Summer Bay", aka, Palm Beach, in Sydney's northern beaches: "Looks like it won't rain for another half hour." 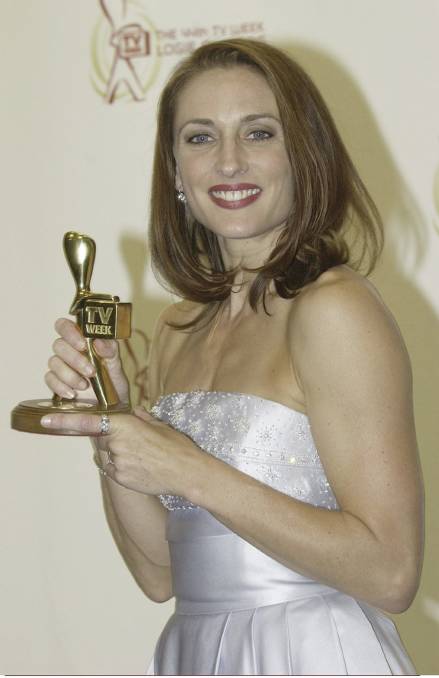 The daughter of iconic Australian furniture designer Tony Parker, Parker grew up on Sydney's North Shore, attending school in St Ives. But it's the inner west where she truly feels at home. Over a coffee in The Fenwick on the Balmain East waterfront, Parker tells me she's been living in the inner west for 32 years.

"I had friends who lived in the inner west and a boyfriend who used to bring me to a great restaurant - which is no longer open unfortunately - and whenever I came over here and spent any amount of time here I just loved it, I felt really at home," she says.

"No matter how your life looks or who you are or how you go about your life there's a certain amount of acceptance and just letting people be. When I first moved here I wasn't that well known, but I became highly recognisable for the shows I was doing at the time - I found in the inner west I was really left to my own devices and I appreciated that." 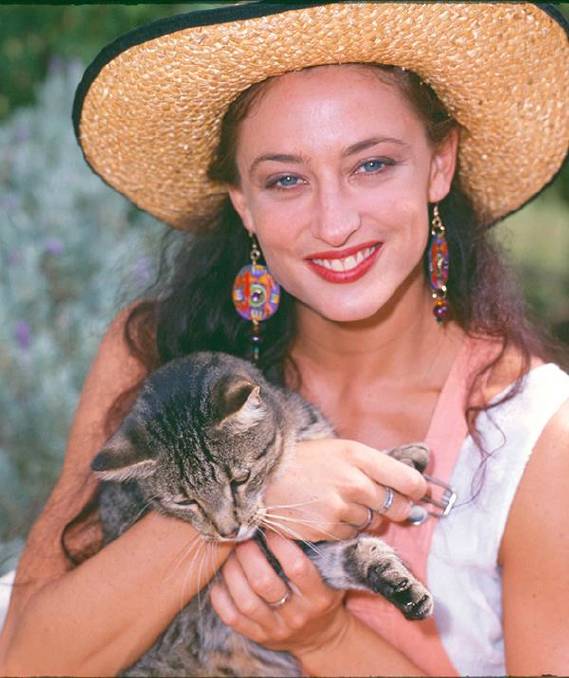 Georgie Parker as Lucy Gardiner in A Country Practice

Parker became a fixture on Australian television and was thrust into the spotlight in her 20s through her role as nurse Lucy Gardiner in A Country Practice from 1989 to 1992.

At the height of the show's popularity, it attracted up to 10 million Australian viewers weekly and was eventually sold to, and broadcast in, 48 other countries. Parker appeared in 266 episodes of the show and along the way she picked up three Logies for most popular actress and one for most popular new talent.

The small-screen successes didn't end there. In 1998 Parker landed another big television role, playing Sister Teresa Sullivan, a nurse and former nun, in the Australian medical drama series All Saints. She was nominated for Logies 13 times through her run on the show, and took out the Gold Logies in 2001 and 2002. 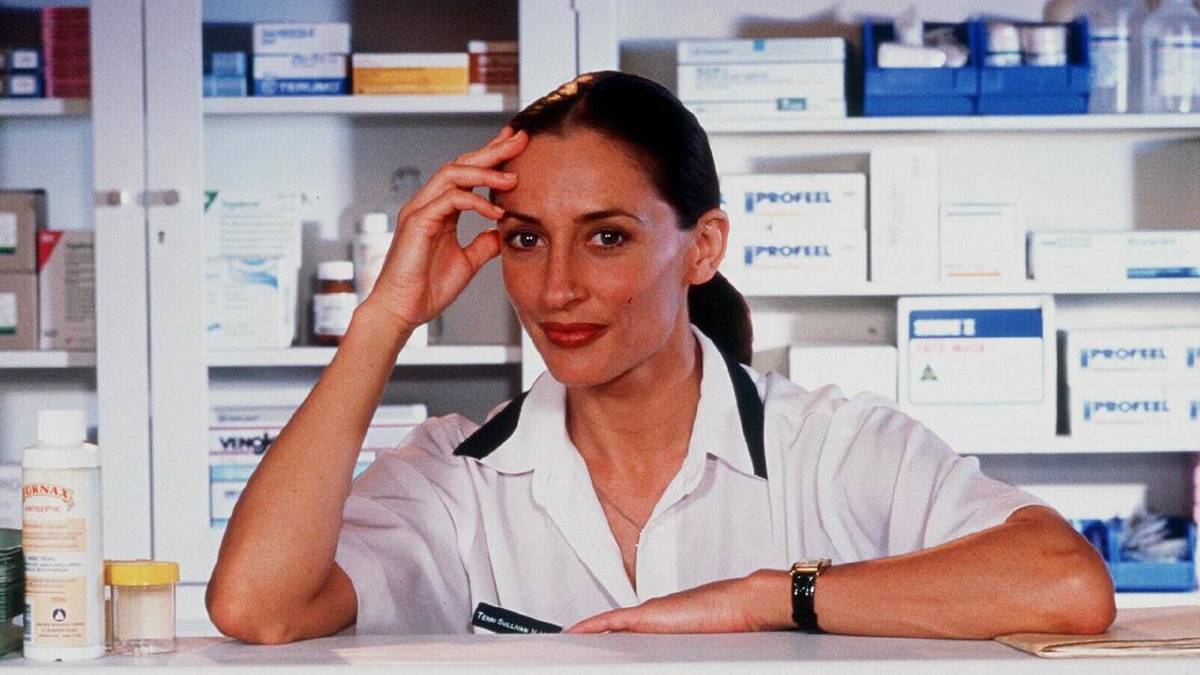 Georgie Parker as Sister Teresa Sullivan on All Saints.

"I loved working on A Country Practice because it was my first proper TV, but I loved my first theatre experiences too because they were just a pure adrenaline rush. But All Saints was probably my favourite because Terri was a very complex character and she was very unlike me. I got to play a real character on TV which is a terrain where you often don't get to play a fully fledged character who is really different to you," says Parker.

In her personal life at that time Parker was also kicking goals - in 1999 she married long-time partner Steve Worland, a screenwriter, and the following year the pair welcomed baby Holly.

When her run on All Saints came to an end in 2005, Parker kept busy with bit parts in popular TV series and leading roles in direct-to-TV movies. In 2010, her career in soap operas took off again when she joined the cast of Home and Away to revive the character of Roo Stewart. "It's such a different experience joining a show which is such a well-oiled machine. When you start a show you world-build and create the reality within it, but Home and Away is a long-running serial with its own reality. The cast and crew are fantastic, I love working with them. Most of the crew I've been working with since A Country Practice - I've done most of the dramas I've done with Channel 7; that's more than 30 years."

While Parker is private about her home life - her way of keeping sane with the attention being a soap-star can bring - she has been very candid in the media about her health. At just 13 years old she was diagnosed with scoliosis, a spinal deformity which develops in around 1 in 15 Australian girls during their growing period from 9 to 14 years.

In reality it's a disability, and it's going to affect me more and more as I get older.

At the time Parker was a dancer who showed a lot of promise in ballet, but the diagnosis brought an end to that with her orthopaedic surgeon saying she would never be a ballet dancer - "I said, 'That's great because I want to be an actor!'."

"Scoliosis does affect a lot of girls, and boys. It affects some people dreadfully, they can't walk properly, they can't breathe properly, it affects their internal organs, they have heart issues. I'm fortunate that I can be as mobile as I am but it's something I manage every day. I have to do a strange collection of exercises every day and have physio every week. It takes up a lot of space in my brain," says Parker.

"In reality it's a disability, and it's going to affect me more and more as I get older - I've lost 10 centimetres in height and have an 80 degree curvature, and that's going to get worse and worse. It's something I've chosen to share because it's going to be very visible. I've already had one hip replacement and I'll probably need another and I'm going to need to have a full spinal fusion in my mid 60s - I'm going to need major surgical intervention." Parker hopes by sharing her challenges with scoliosis she can start healthy conversations about the oft-stigmatised condition and can inspire others who may have received a diagnosis themselves.

"There is a lot of shame and embarrassment around scoliosis and there's not really healthy discussion about the fact you may not look like everyone else. I do want to share my experience so if people do get a diagnosis they know it's not the end of the world, and if you're told you can't do something you might just have to change the way you do it," she says.

"If you're given an obstacle you should try to find your own way around it. There's no one way to do it, everyone has to find their own way through that. If you're given a diagnosis of a certain kind, whatever it may be, it doesn't have to mean it's the end of something but it's an opportunity to discover more about yourself."

Back to the boards

When not in-front of a camera Parker likes to get back to her roots on stage. Some of her many theatre credits include playing Kate Conroy in The Man from Snowy River: Arena Spectacular and roles in Scenes from a Separation, Chapter Two and David Williamson's Rhinestone Rex and Miss Monica. She's looking forward to getting on stage again next year for a yet-to-be announced show at Kirribilli's Ensemble Theatre, which she's an ambassador for along with fellow Channel 7 star Todd McKenney. "I always take time out to do live performances, I'm lucky I have that in my contract. It certainly keeps my skill set sharp, there's nothing more exposing than being on stage telling a story and it's great, I love the whole world of it," says Parker.

"I do like jumping between worlds. It's interesting because when I was just doing theatre and went to do TV they called me the theatre actor but then when I'd done TV for a while and tried to go back to theatre they called me a TV actor. But that's not the case so much anymore - it's a multimedia assault."

Asked whether she prefers working on the silver screen or on stage, Parker diplomatically tells me she enjoys "both, for completely different reasons".

"With theatre it's just you, the story and the audience. You get to control the whole experience and it's a condensed time period, you get two and a half hours of storytelling and the audience lets you know how they feel about it" she says. "Filming is so different, it's more disjointed. But the thrill is working with the crew and its pinpointed performance, the director dictates how the story is told."

Parker's shooting schedule means a lot of the time she's outside the inner west - most recently she and castmates Ray Meagher, who plays Alf Stewart, Lynne McGranger, who plays Irene Roberts, and Ada Nicodemou, who plays Leah Patterson, where spotted eating at the RSL Club in the town of Young in regional NSW. But she still finds plenty of time to enjoy life on the Balmain peninsula.

"It's changed a lot since I moved here, I have to say, but the heart of it is still the same. No matter what your interests are there's always something in the inner west to cater to your specific obsession - there are so many great restaurants in Camperdown and Marrickville and there are great local theatres," she said.

"But what I like most about it is the sense of community here, even though there's a transient community to a point, you still have people who stay here once they discover it. It doesn't matter wherever you rent or own, it's of no consequence, once you spend a certain amount of time here it feels like it's your home and people have a sense of responsibility for it."