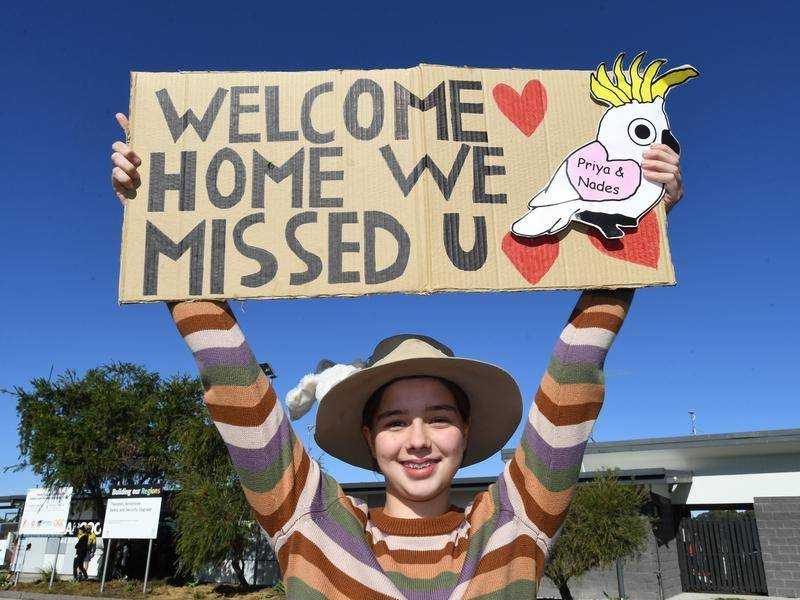 After years of bureaucratic torture, a family of four Tamil asylum seekers have arrived home in Queensland.

After four years of detention centres, court challenges and a major medical scare, a family of four Tamil asylum seekers who captured the nation's hearts have arrived home in Queensland.

Priya and Nades Nadesalingam and their Australian-born daughters Kopika and Tharnicaa touched down at the Thangool Airport near their home town of Biloela on Friday afternoon.

The family shared a hug on the tarmac, and the two girls waved to the awaiting crowd who clapped and cheered with signs and streamers.

Priya blew a kiss to waiting friends and supporters who have fought for this moment since the family was first detained in March 2018.

Nearly 600,000 people signed Home to Bilo campaigner Angela Frederick's petition in support of the family, and more than 53,000 phone calls and emails were made and sent to Australian politicians.

The family's return coincides with the Banana Shire's Flourish Multicultural Festival on Saturday and Tharnicaa's fifth birthday on Sunday.

She was nine months old when her family was first placed in an immigration detention centre in Melbourne.

The former coalition government tried to deport the family on a commercial flight from Melbourne to Sri Lanka in 2019, but an 11th hour court injunction order the plane land in Darwin.

The four were then held at the Christmas Island detention centre for two years until then immigration minister Alex Hawke moved them to community detention in Perth in mid-2021.

His change-of-heart came after Tharnicaa was medically evacuated with a suspected blood infection.

Following the change of government in May, interim Home Affairs Minister Jim Chalmers gave the family permission to return to Biloela on bridging visas.