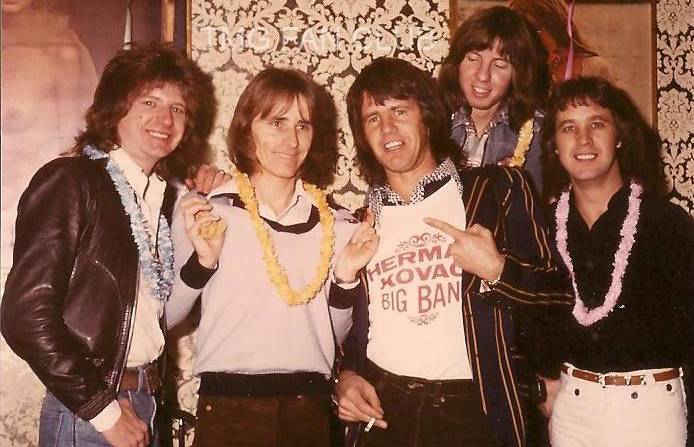 Concerts in September to coincide with 75th birthday of late, great rock original.

He died just a day short of turning 54, but Ted Mulry, one of Australia's great singer-songwriters, lives large in the memory of those who knew him.

A larger-than-life writer of myriad classic tracks for both himself and others, he left a hole in the 1970s that has never been quite filled.

But a series of concerts in September coinciding with what would have been Ted's 75th birthday will go some way towards it.

A terrific line-up of his rocker mates will take to the stage - some for the first time in years - in a musical celebration of his life.

They will pay tribute to the flame-haired dynamo by performing his songs - think Julia, Louise, Jump in My Car, You're All Woman and You're Driving Me Crazy - at four concerts in and around Sydney.

The show's producer, Ron Clayton, a a former roadie with the Ted Mulry Gang who once shared a house in Sydney with the band, says the show will covers Ted's career from start to finish.

"It will include a lot of his early material, his big hits, songs from his last album (which he did as a solo in 1999), a song from each of his Ted Mulry Gang albums and a couple of songs that were never released.

"A lot of these artists are from Ted's early days. Alison hasn't worked (in the industry) since 1975. But she won't be singing Superman. She willbe singing its B-side, a song called Take Me Back, which Ted wrote. She will also sing a song from Ted Mulry Gang called How Long."

Altogether, about 40 Ted Mulry songs will be performed in the show, which will be hosted by Glenn A. Baker.

Ron said English-born Ted never really wanted to be a performer: he just wanted to write songs. He also believes he was seriously underrated.

"The Beatles were one of the first bands to write all their own material but at the end of their era that was just about finished. Even Neil Diamond, who had great success as a songwriter, was told that he had to get out and perform if he wanted his music to be heard."

Ted's first success was Julia, which reached the national Top 40 on the Go-Set chart. Ron said itwould have done better had it not been for the 1970 "pay for play" dispute between radio stations and music publishers.

A major hit was Falling in Love Again, whichreached the national top 10. Ted performed it at the Tokyo Song Festival, where he was the first Australian to represent the country. Although it wasn't written for him, the Vanda and Young song went so well that it was released as a track soon afterward.

Other tracks Ron admires include Louise and Marcia, which he said was in was top 20 in Brisbane but didn't get played anywhere else. Memories was top five in Melbourne. He said both should have done better.

"Until 1975 or '76 there was any national networking of radio stations. It was a bit like this guy is from Sydney so we're not going to pay him in Melbourne. It was really hard to achieve a national audience."

Ted also penned You're All Woman for Sherbet, who scored a big hit with it, while John Paul Young recorded You're Driving Me Crazy. He also wrote for John Farnham and Allison Durbin.

On and off the stage Ted was a force of nature, with an "incredible sense of humour", Ron said.

Ron met him when he working as a roadie with Newcastle band Velvet Underground, whose members Herman Kovac and Les Hall went on to become foundation members of Ted Mulry Gang.

Ron, who is also the TMG's archivist and living reference encyclopedia (he has written a book on his days with the band), first met Ted when at his first live performance: the Trocadero in Sydney on March 23, 1970.

"We all lived together in Dee Why for several years and I shared a room with Ted in the early days when we were on the road." 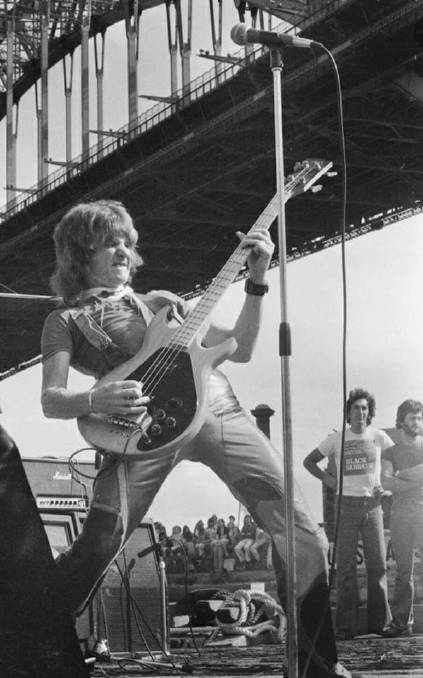 GOING OFF: Ted Mulry at the 2SM Stars and Stripes Concert in March 1976. The event was staged on a pontoon under the Sydney Harbour Bridge at Kirribilli. Photo:t Phillip Morris

It made an interesting combination, to say the least.

"We were a band where nobody drank and nobody smoked and Ted did both," Ron told The Senior. "Being with him was a party that went on night after night. He could turn a riot into a party and a party into a riot, though there was nothing with audiences that we couldn't quell."

Ron said Ted did get have some run-ins with the powers that be, largely due to a bawdy pub song called Dinah, whichthe band picked from English crews while performing on Pacific cruises with Shaw & Saville.

Much in the same way as The Angels' later Am I Ever Gonna See Your Face Again, it was an audience participation song containing a particular four-letter word.

Ron said: "The trouble was they used to play it three or four songs from the end of the set when parents were waiting outside the hall to pick their kids up. Ted got arrested on numerous occasions over it, went to court over it.

"One time we were in Western Australia and the police commissioner - not just a sergeant or whatever - met us at the airport and said to Ted you might have gotten away with that on the east coast, you're not getting away with it here. And we'd have a police officer on both sides of the stage to make sure."

At later live gigs, Ted threw the unmentionable word into Jump in My Car "and nobody even noticed".

"In fact, when we did 2SM's Concert of the Decade on the steps of the Sydney Opera House, we had to sign a three-page declaration about not doing Dinah and this, that and the other.

"But Ted threw it in out of defiance of the Catholic Church, which owned 2SM, and it went live on radio. And also Channel Nine's broadcast. They edited it out of the replay."

Ron said the band was one of the biggest crowd magnets in Sydney, drawing twice the number of AC/DC.. fans at suburban dances and right up there with Sherbet and Hush.

But when it went on went on Countdown, with its teeny-bopper image, it lost the young male fans who preferred a Status Quo or Slade style of music. "They were a full-on rock band."

Ted died of brain cancer on the eve of his 54th birthday.

Ron is passionate about keeping recognition of Ted's songwriting ability alive and is petitioning to have TMG inducted into the ARIA Hall of Fame as well as Ted into the Songwriters Hall of Fame.

Ron says Ted could have been writing and performing to this day, much in the same way that performing artists Russell Morris continue to flourish long after their heyday.

"It's so sad that Ted can't be here to celebrate his landmark birthday. But we'll do it for him," Ron said.

For more information or to order Ron's book about life with TMG, It's a Roadies Job, go tedmulrygang.com