The cost of living has been a huge talking point over the past few months.

Over the past several weeks, there has been a lot of talk about inflation, interest rates, wages, and the cost of living.

The Australian Bureau of Statistics (ABS) released its snapshot for January to March 2022. In that time, the consumer price index has risen by 2.1 per cent.

The consumer price index - or CPI - is the measurement of household inflation. It charts how much costs rise in a variety of categories.

With that three-month increase, the annual inflation rate rose to 5.1 per cent at the beginning of this year. That's the biggest increase since the GST was introduced back in July 2000.

But that figure is not nearly approaching what's been seen in other countries. The United Kingdom, for example, has seen inflation rates peaking over 9 per cent in recent weeks.

So what is inflation, and how does it put pressure on the amount we pay for things?

Inflation is the general increase in costs over time. It can occur naturally when demand for a product outstrips its supply.

So, for example, a banana muffin at a cafe may cost $2, but five years ago that same muffin at that same cafe cost just $1.50.

That means that that muffin has been subject to a 33 per cent inflation rate over the past five years. 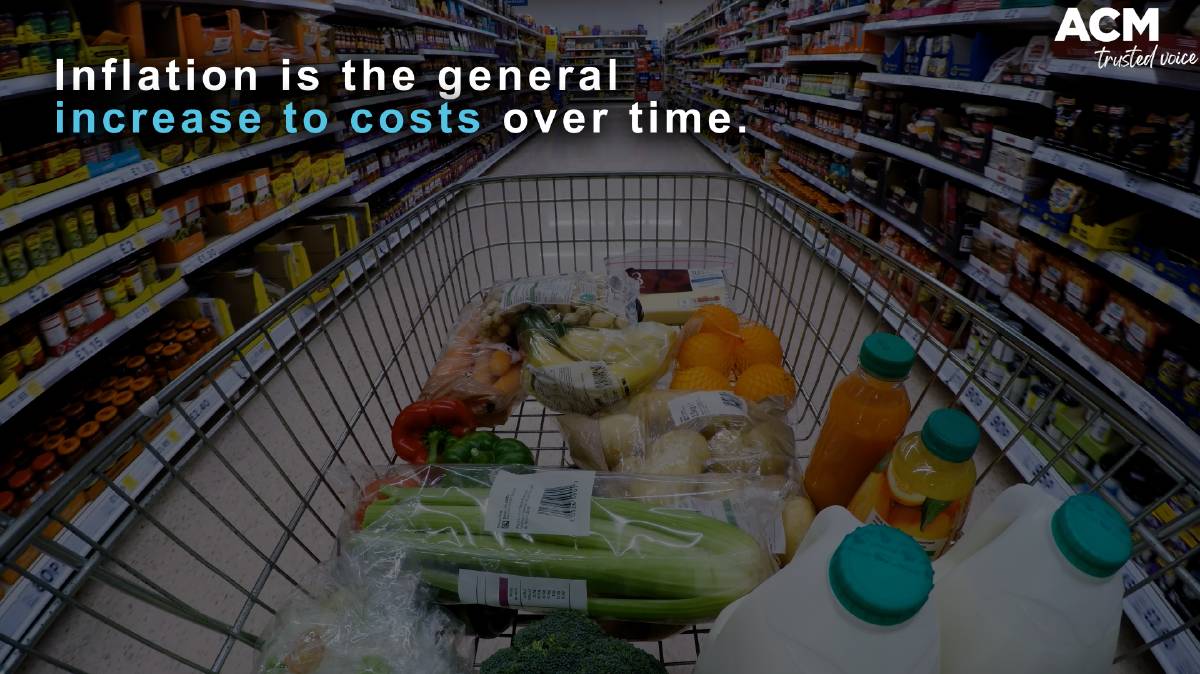 COST OF LIVING: Inflation is a normal part of a functioning economy, but problems begin when the cost of living is rising faster than wages can grow.

Why has the price of the muffin increased that much over time? There could be a number of reasons for that. Firstly, there could be a shortage of the raw materials needed to make the product.

When Cyclone Marcia and Cyclone Debbie hit Queensland in 2015 and 2017 respectively, many banana plantations were wiped out.

That meant that the price of a bunch of bananas at the supermarket increased to $12 a kilogram.

At that time, it cost cafes and bakeries more to source bananas, so a humble banana muffin became more expensive.

Floods, droughts and other natural disasters often put a lot of pressure on raw materials too, because they wipe out much of the nation's agricultural areas.

The global price of petrol tends to increase the cost of goods and services too because this is what's needed to transport the raw materials to where they need to be produced.

The recent unrest in Ukraine has forced up the price of petrol, and in some areas, it is now costing more than $2 per litre.

In the three months to March this year, fuel rose in price by 11 per cent.

Though this figure is expected to drop slightly in the next three-month snapshot after the Coalition government's Budget cut the fuel excise.

How does this help the fuel price? Every time you fill up your car, you pay a little bit to the Australian government as well.

At the time of the federal Budget, Australians paid 44.2 cents per litre in fuel excise, so the government decided to reduce this payment to ease the cost at the bowser.

But petrol was not the only thing to see a price hike between January to March this year.

The cost of food also dramatically increased, with beef rising 7.6 per cent, vegetables rising 6.6 per cent, and fruit rising 4.9 per cent.

Interest rates are increased to put downward pressure on the steeply rising inflation rates. Higher interest rates mean people cannot borrow as much from the bank, and it means that spending starts to slow down.

At the beginning of May, the Reserve Bank of Australia raised the interest rates from a historic low rate to the current rate of 0.35 per cent.

This means that people who borrowed money, either through mortgages or debt, without a fixed rate will now be paying more back in interest rates.

All of this is a relatively normal part of a functioning economy, but the problem begins when wages do not rise in line with the rate of inflation.

Which is what is happening at the moment. Salaries have only increased at half the rate of inflation.

So, to return to the example of the banana muffin, if that muffin rises in price by 33 per cent, but your wage has risen by only 16 per cent, then you will not be able to buy as many banana muffins as you could five years ago.

And you'll be able to buy even fewer muffins in years to come as the cost of that muffin continues to rise, and your wage continues to stagnate.

The story Inflation, interest rates, wage growth, cost of living: How does it all work? first appeared on Newcastle Herald.