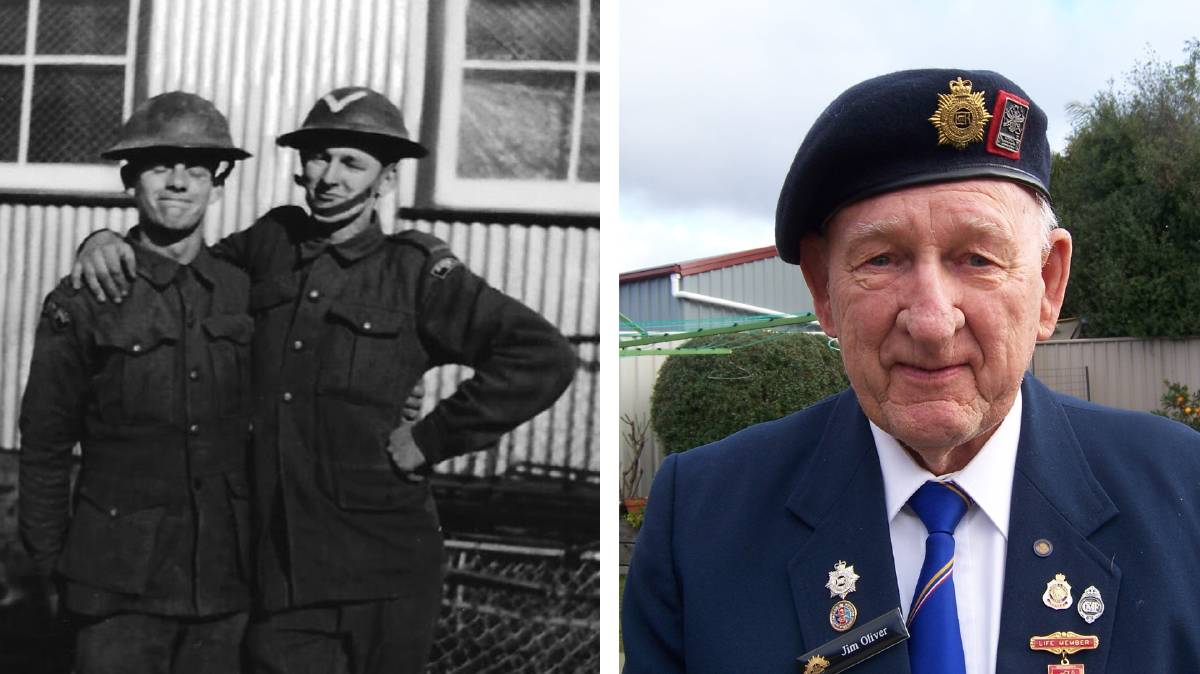 GREAT DAYS: Jim Oliver (on the right) with Ron Liversage at Puckapunyal in 1955. He can't recall what the "V" stood for but said the helmet was "a bloody heavy thing - I've still got one"; (right) Jim nowadays.

"I enjoyed it all," says Jim Oliver after receiving 70-year anniversary certificate.

A former national serviceman has shared his experience of being called up after reading an article in The Senior about Nashos seeking a DVA gold card (Memory Lane, May 2022 edition).

Jim Oliver, from Kangaroo Flat in Victoria, was 16 when Robert Menzies introduced the National Service Act 1951. He was conscripted and entered the army on April 26, 1955. He says he was thrilled.

It was not his first time in an army uniform. Born in Murtoa, he moved with his parents to North Fitzroy and enrolled at the then all-boys Northcote High School.

He writes: "To my joy, I was allowed to join the school army cadet unit. I loved it. We did drill, marching and drill with a .303 WWII rifle. Our rifles, however, had a .22 bore. I remember going to a rifle range at Williamstown.

"I also went on a week camp training at Puckapunyal. I used to go shooting rabbits at Murtoa with my Uncle Jim using a .22 rifle."

Then came the call-up.

"It is hard to believe that it has been 67 years since I was in the army. I enjoyed it all. I cannot recall any bullying or any major troubles. At Puckapunyal we all acted as a team with the exception of a very few idiots.

"Most of us just accepted the not-great conditions and got on with it. We survived with the cold showers, living in marquees, freezing to death and the long route marching and constant drilling.

"The food was great. My special was when we were out on the range somewhere and fed by the army cooks from a mobile kitchen, Stew! The best stew I have ever tasted, I wasted nothing. Also cooking a bit of bread for toast at night on the boiler fire, it was heaven.

"We all took great pride in wearing the uniform. We took our .303 rifles home with us on leave minus the bolt. Imaging me going home to Fitzroy jumping on a double decker bus at Spencer Street station with a pack and .303 rifle over my shoulder."

Sadly, Jim knows of only one member of his platoon left.

"At our age (most of us are 86 and over) we are taking over from the WWII veterans. It took a while for us to be able to join the RSL and march as Nashos on ANZAC Day, I have remained within the National Servicemen's Association and contributed to our Nasho Memorial at Puckapunyal.

"I have just been presented with my 70-year anniversary certificate.